The North-South Corridor and the Realities of the New Eurasia 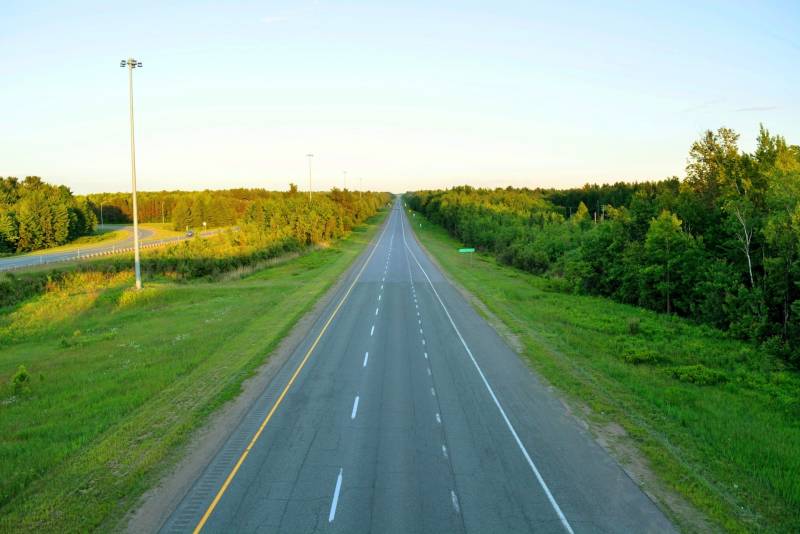 As a result of current events, Russia, as it has already become obvious, will have to build completely new trade routes. This task will take more than one year or even one decade. Even if they did not begin to solve it yesterday and not even after 2014, however, many projects proclaimed back in the distant XNUMXs are either implemented with a huge lag behind the original plans, or did not go beyond purely virtual concepts at all.


Nevertheless, work in this direction will have to be accelerated, compensating for the sluggishness of the bureaucratic machine in past years.

For example, the existing border checkpoints to China are clearly not enough, so it has already been announced that they will try to launch a new crossing near Khabarovsk earlier than the year 2026 planned according to the original plan. Two new bridges to our Asian neighbors, opened this year (road - Blagoveshchensk-Heihe and railway - Nizhneleninskoye-Tongjiang), as well as promising cross-border crossings will serve the needs, first of all, of the Far East itself and partly of Siberia.

Access to Western Siberia and the European part of Russia will be provided by the famous Zabaikalsk-Manzhouli crossing, the modernization of which has long been underway on both sides of the border. In addition, the idea of ​​the Altai Transport Corridor, which had already been repeatedly abandoned, loomed in the press again, but the harsh wind of change forced it back again. Even if it is still at the level of vague conversations.

But not by a united China... Since the International North-South Transport Corridor, which will connect the European part of Russia with Iran, and through it, with India, acquires special, perhaps even more important, importance in the new conditions. This idea arose back in the 2010s, but its practical implementation began only in the second half of the XNUMXs.

Iran, Azerbaijan, Russia, and India have already invested billions in upgrading their rail and highway networks, and this massive effort continues. Although the pandemic and armed conflicts have made their own adjustments to the plans.

Here, shipping along the Caspian Sea to the shores of Iran and Turkmenistan is of particular importance. Earlier, there was also a lot of talk about the construction of a new Caspian port of Lagan in the Russian Federation, but it never started.

An alternative route is also kept in mind. Through the Caspian Sea, Turkmenistan, as well as Afghanistan and Pakistan, it was supposed to stretch the “Silk Roads” to India itself along highways and railways. In this sense, the recent presence at SPIEF of a representative of the Taliban government (a terrorist organization banned in Russia) ceases to look like such a curiosity. And if we add here the fact that Vladimir Putin made his second foreign visit after the start of the NWO to Turkmenistan, the pieces of the mosaic already add up to a relatively complete picture.

However, this truly exotic route is seen rather as an additional and reserve to the main one - through Azerbaijan (or the Caspian Sea) and Iran. And the point here is not only in the specific shade of the Turkmen, and even more so, the Afghan systems of power and not in customs nuances (more borders - more bureaucracy and various fees), but in the banal lack of infrastructure. Sometimes - even in the basic form.

It is obvious that one can speak about the presence of transport infrastructure in Afghanistan very conditionally. For example, the Russian gauge railway (1520 mm), laid back in the USSR - through the famous Friendship Bridge - stretched only to the border of Hairatan. Under the Americans, the railway was extended to Mazar-i-Sharif. And that's it. Plans for an extension to Herat, and even more so the Great Trans-Afghan Highway, which was so loudly talked about at the beginning of 2021, after the well-known events of the summer of that year, became a matter of a very distant future.

There are other risks as well. political. The West will try to prevent the creation of Eurasian cooperation beyond its control. After all, the North-South corridor will help Russia and Iran overcome sanctions, and Azerbaijan, which is periodically threatened with the same sanctions, will be less susceptible to such threats.

Actually, it is precisely for this reason that both the former British Empire and its current successor, the United States, have always opposed any cooperation within the continent. Sea routes are completely controlled by the Anglo-Saxons, continental - only partially.

The main target, most likely, will be the key country of the corridor - Iran. Here, the interest of Israel is added to the Anglo-American interests, which for a long time - and quite openly - talks about the possibility of an attack on Iranian nuclear facilities.

Under one pretext or another, transportation facilities can also be subjected to such strikes. Even if Israel itself does not need it, "senior comrades" can "recommend" a wider range of targets. However, such an attack is fraught with unpredictable consequences. Iran is by no means the Yugoslavia of 1999 with an uninitiated Milosevic at the head - the opportunity and desire to strike back are present in abundance here.

However, it would be naive to assume that the threat comes only from Israel. The most vulnerable section of the corridor runs between the ports of Bandar Abbas in Iran and the Indian Nhava Sheva. This water area can be blocked at any moment by the military of the United States, the headquarters of the Fifth Fleet is located in Bahrain. Not to mention the two air bases - El Udeid (Qatar) and Diego Garcia (British Indian Ocean Territory), which operate as a constant threat.

Another "case" that is already being used against the North-South corridor is the buildup of instability in Iran itself. Noticeable protests flare up in this country every few years, re-twisting in the West the already familiar gossip about the supposedly imminent "fall of the ayatollah regime."

However, in reality, things are still somewhat different. In this difficult year, Tehran has resisted again, relations with the Russian Federation are getting stronger and militarytechnical cooperation (including the notorious drones and, possibly, the Su-35 from the unrealized Egyptian order) is not a special case of a forced partnership, but a completely conscious short- and medium-term direction. For Moscow, the North-South corridor becomes a kind of analogue of the now destroyed Baltic gas "streams".

Speaking of gas. The countries of South Asia have a vested interest in Russian energy resources, which so far are delivered by sea, which makes supplies vulnerable. Laying pipelines across the entire continent is still a difficult task, both for geographical and political reasons, but it can be solved in the future. And the talks about specific ways of implementation are getting more and more insistent.

Access to the South of Eurasia becomes in many ways even more important than the conditionally “Chinese” direction. Including because China itself, outside of empty rhetoric, offered little to the Russian Federation. Moreover, a number of steps are difficult to interpret as friendly. For example, the Russian press predicted the opening of the Nizhneleninskoye-Tongjiang bridge back in April, the Chinese newspaper Global Times talked about August, but in fact the bridge began to work only in November. At the same time, some Russian resources tactfully hinted that the reason for the delay lies precisely on the Chinese side.

Outcome. There are still many obstacles along the way along the North-South corridor. However, if in the zero years it was only an interesting addition to relations with the West, and in the 2010s it became extremely important, then in the twenties there is simply no alternative to it.
Reporterin Yandex News
Reporterin Yandex Zen
5 comments
Information
Dear reader, to leave comments on the publication, you must sign in.