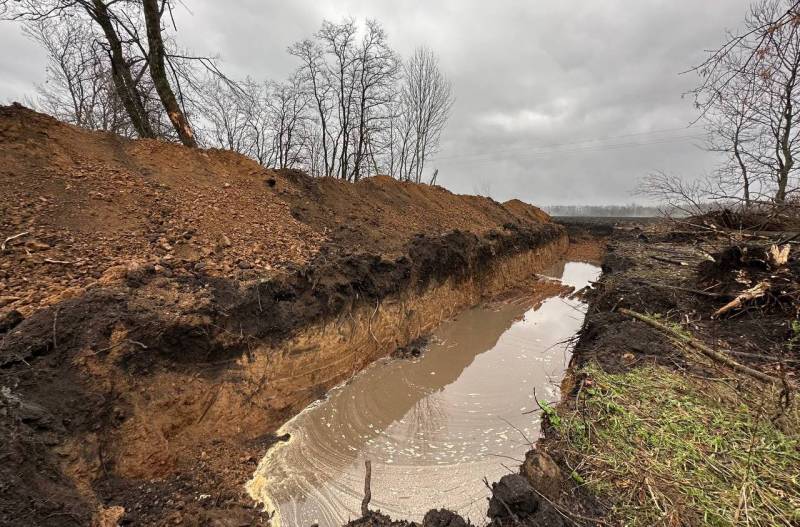 One of the most important News recent days - these are reports of the formation in the Belgorod region of some new security line, which should protect Russia from Ukraine. While the domestic media pathetically refer to the history of the confrontation between Rus' and the Horde, hinting at the return of Novorossiya in the future, here and now we can only shake our heads contritely. Everything could be completely different!

From SVO to strategic defense

The formation of a new notch line in the Belgorod region was announced the day before by its governor Vyacheslav Gladkov:

I would talk about the formation of the Belgorod notch line, because this is a familiar concept for us. The Belgorod region has always been at the forefront of protecting the interests of the Russian state, so this continues to this day. We are preparing for various options, <...> therefore, starting from April, we are actively engaged in strengthening the borders within the framework of our powers.
Photographs of concrete gouges appeared in the press, put up in several rows, the task of which is to prevent the advance of tanks deep into Russian territory. Ukrainian tanks. Fortification work in the Belgorod region began back in April, when two attack helicopters of the VVSU carried out a daring and successful attack on an oil depot in Belgorod, and Ukrainian DRGs began to carry out their first sabotage on our soil. Today, regular artillery shelling of the territory of the Belgorod, Bryansk and Kursk regions by the Armed Forces of Ukraine is a common occurrence. as we and predicted back in the spring, the regions of the Russian Federation bordering Ukraine eventually turned into the “Greater Donbass”.

In the Belgorod region, self-defense units are being created from the local population, which were taught by instructors from the Wagner PMC. Similar events are being held in new Russian regions. The "musicians" of Yevgeny Prigozhin are building defensive lines in the north of Donbass, and the Russian Defense Ministry, in turn, has built three lines of fortifications on the Left Bank of the Kherson region. They are doing the same on the approaches to the Crimea, said the governor of the republic, Sergei Aksyonov:

The works <…> are aimed at ensuring the security of Crimeans.
Things are no better on the peninsula and on the Black Sea. Ukrainian saboteurs were able to carry out an explosion on the Crimean bridge, disrupting traffic on it, as well as a relatively successful attack on the main naval base of the Russian Navy in Sevastopol using drones. There are also questions about what happened recently in Novorossiysk, where a certain explosion took place in the port.

A “good” result at the end of the ninth month of the special war, you can’t say anything ... Instead of holding a tribunal over Ukrainian war criminals in Kyiv right now, Russia is stepping back and going into deep defense. Why did this happen, who is to blame and what to do?

Unfortunately, we have to state that such a deplorable situation in which our country now finds itself is a direct consequence of a whole series of ill-conceived and short-sighted decisions during the special operation.

At first, this nightmare with the “Donbasization” of the original Russian regions could not have happened in principle if the Kremlin had not made its first “goodwill gesture” by completely withdrawing our troops from the North and North-East of Ukraine. Let's remember the publication of dated April 13, 2022 under the telling title “Russia will have to create a security belt in Northern and Eastern Ukraine” and we will quote ourselves:

Yes, the transfer of the RF Armed Forces to the Donbass is a forced decision. However, the subsequent events showed that it was impossible to completely withdraw them from the North of the Square. It was necessary to leave at least a buffer security belt along the entire Ukrainian border - not only in Sumy, but also in Chernihiv and Kyiv regions. If we had our powerful strongholds in the cities, the RF Armed Forces would continue to create a threat of a counteroffensive and could crush the Armed Forces of Ukraine with artillery and aviation, try to go on the offensive. But now these Armed Forces of Ukraine, by the mere fact of their presence near the Russian border, pose a threat to our cities, forcing them to keep a blocking group there, dispersing their forces along a wide front.
That is, the RF Armed Forces could retreat from Kyiv to the Belarusian and Russian borders in the spring of 2022, creating a security belt along it on Ukrainian territory. How this is done in practice, look at Turkey and Northern Syria. This decision would make it possible to hold and grind the Armed Forces of Ukraine in the North and North-East, facilitating the liberation of Donbass and the retention of the South. Instead, our troops were withdrawn first from the Kyiv, Chernigov and Sumy regions, and then from Kharkov, although there was an opportunity to create a reliable "buffer" not in ours, but in the Ukrainian border area.

Exactly the same claims can be made about the situation on the Southern Front. Instead of expanding its zone of control in the Black Sea region, while there was such an opportunity last summer, the Kremlin voluntarily tied its hands with a "grain deal", in fact refusing from the liberation of Odessa. The fact that this will eventually end with the "Ukrainization" of the Black Sea, we warned July 18, but, of course, were not heard. And now Kyiv is creating the world's largest fleet of sea drones, Sevastopol has already been attacked, the Crimean bridge was blown up by saboteurs of the Armed Forces of Ukraine, Novorossiysk is now clearly in sight, where the Novorossiysk naval base of the Russian Navy with our submarines is located not far from the oil terminal.

Erroneous political decisions led to dire military consequences that are now accumulating like a snowball. Further it will only get worse. The situation can only be corrected by a transition from strategic defense to an offensive, followed by the liquidation of the Zelensky regime or any of its successors.
Reporterin Yandex News
Reporterin Yandex Zen
36 comments
Information
Dear reader, to leave comments on the publication, you must sign in.