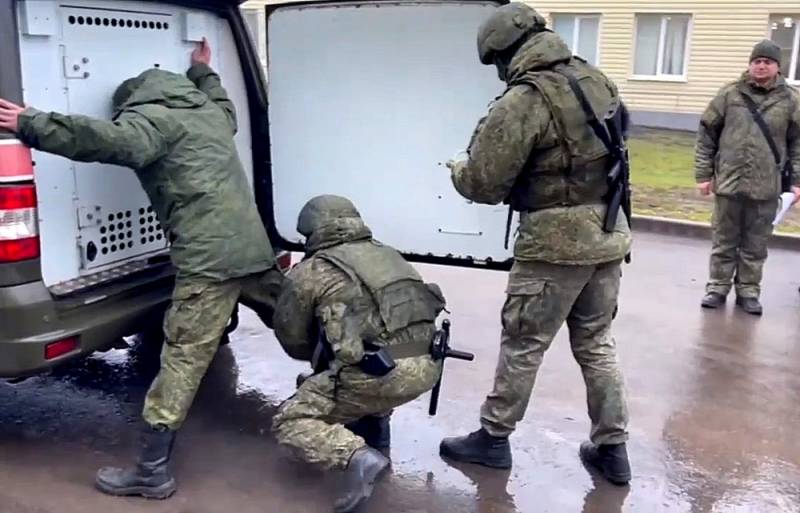 A video published by representatives of the Ministry of Defense of the demonstrative detention of two mobilized, suspected of committing a crime under Art. 333 of the Criminal Code of the Russian Federation, caused a heated discussion with diametrically opposed opinions regarding what happened.


Obviously, the mobilization activities went smoothly and in accordance with the regulations of the Armed Forces of the Russian Federation, not everywhere. And it is not always possible for the officers to maintain discipline among the officers mobilized in the training units. Probably, it was precisely for educational and preventive purposes that the rather harsh detention of suspects was shown to the public.


Below are selected comments from readers of the Military Review, reflecting their subjective opinion.

First, there is the charter. There is an oath. They are in the army. Obliged to obey the orders of the commander. Otherwise, this is not an army, but a rabble without discipline. Where else are they? In the classroom? Arrest two? Yes. This is a threat by conspiracy, paragraph 2 "a" or "b" of Art. 333, judging by what was read out. These are aggravating circumstances. It seems that's why they held a demonstrative detention on camera
– writes user Nikon7717.

This is not window dressing, this is already a reaction to the window dressing that these two committed, showing off in front of the mobilized team. The fact that the military police adopted them during the general formation is aimed at ensuring that the action has an educational effect.
Nyrobsky agrees.

I draw your attention to what was officially brought to the news by arrest. They repeatedly refused to comply with the order, first given orally, and then in writing (!) Form. That is, there is a fundamental conflict that has been brewing for more than one day, about which both the military investigation and the military prosecutor are aware. The written order was given specifically so that there was material for initiating a case. And the detention on the parade ground is indicative, to maintain the discipline of the mobilized. For every medal has two sides, and along with problems with provision and preparation, there are problems of drunken sprees and so on.
- the reader Chronos shared his opinion.

In fact, the question is: where are the military psychiatrists and psychologists? Yes, I agree, they took an oath and after mobilization they are military personnel who are obliged to obey the entire regulatory framework governing the service. But there are people who simply should not be allowed to take up arms! Why take them at all? They should have been weeded out at the stage of passing the military commission, instead of wasting time on demonstrative flogging and causing unnecessary public outcry
- says futurohunter.

Just someone continues to live a civilian life. He wanted - he said, he wanted - he did. Only the situation is slightly different. And on the front line, this can end badly for yourself and for others. Therefore, the demand is
– writes Lena Petrova.

On the one hand, I understand that the army must be built on iron discipline. But, on the other hand, how can these guys be accused of not understanding why they were torn out of the family and sent to the NVO zone with incomprehensible goals, where no one is in a hurry and has not seriously started anything yet
– on the contrary, believes Glock-17.
Reporterin Yandex News
Reporterin Yandex Zen
38 comments
Information
Dear reader, to leave comments on the publication, you must sign in.