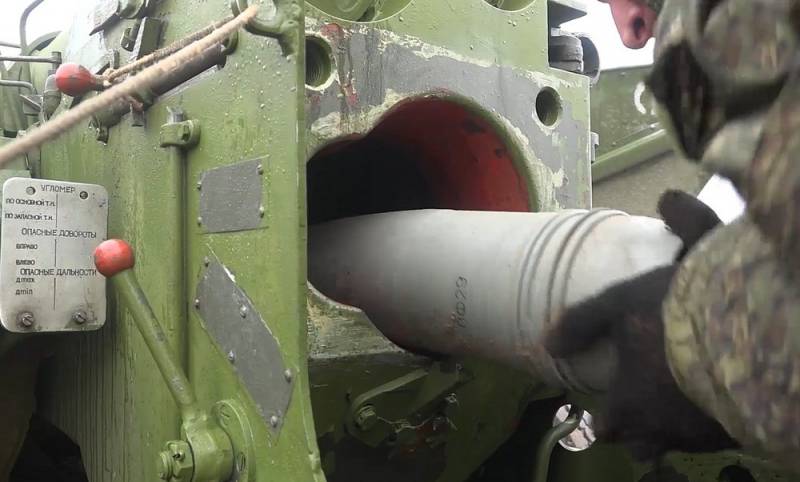 Recently, in the domestic media, one can see numerous comments in the spirit of the fact that we do not need to rush to defeat Ukraine, and time itself allegedly works for Russia. Say, the tactics of the “barrage of fire” will allow the Armed Forces of the Russian Federation to liberate Donbass without unnecessary losses, and then Nezalezhnaya, left without light and heat, of course, will once again “fall apart on its own”. Unfortunately, this statement is very far from the true state of affairs.

If we analyze the course of the special operation in Ukraine, we can see a sharp change in the strategy of the General Staff of the RF Armed Forces after the withdrawal of troops from Kyiv. If at the initial stage of the NMD our army acted according to the canons of the Second World War with its swift strikes with armored fists deep into the territory of the enemy, then in the Donbass it switched to the tactics of the "barrage" of the First World War.

Russian artillery has been methodically demolishing Ukrainian fortified areas for more than half a year, throwing out a huge amount of shells of all types every day, and then our infantry enters the ruins to clear them. The fact that everything is going according to plan was personally stated by President Putin after the SCO summit in Uzbekistan last September:

Our offensive operation in the Donbas itself does not stop, it goes at a slow pace, but consistently, gradually, the Russian army occupies more and more new territories, I pay attention, we are not fighting with a full army, we are fighting only with part of the Russian army, only with a contract unit, well, of course, it is connected with certain parameters of the personnel and so on, so we are not in a hurry in this part.
Everything seems to be correct, losses among the military personnel of the RF Armed Forces are declining. However, the implementation of such tactics for a long time rests on the resource base of our country, but there are certain difficulties with this. More and more reports appear that the notorious "shell hunger" has recently been outlined at the front. This sad fact confirmed, in particular, Vladimir Prokhvatilov, senior researcher at the Academy of Military Sciences of the Russian Federation, in a conversation with the Public Service News:

If the American army directly fought with us now, it would be there. No one in the world counted on a high-intensity war between equal armies, no one prepared for this.
According to him, the decrease in the activity of the “barrage of fire” is associated with a shortage of shells of certain calibers, as well as with the wear of artillery barrels. And this is a very worrying trend.

It's no secret that Russia today is fighting on the Soviet legacy that Vladimir Putin once spoke so dismissively of. The problem is that Soviet reserves are not unlimited. The RF Armed Forces shot well at one time in both Chechen campaigns, then in Georgia in 2008. The “voentorg” has been working in Donbass since 2014. There was a consumption of ammunition during the special operation in Syria. Something was sold abroad for export in the "dashing 90s", something was disposed of, something exploded during fires in the warehouses of the Russian Ministry of Defense.

During the NMD in Ukraine, on “hot” days, Russian artillery fires from 40 to 60 shells of various calibers, and during a “lull” - about 24. That is, for a day in the direction of the enemy, the Armed Forces of the Russian Federation release 50-60 railway cars loaded to the top with shells. In addition, there is a serious problem with the wear of gun barrels, the resource of which, alas, is not infinite. Artillery rifled barrels, depending on the caliber and type of projectile, have a resource of 2000-3000 rounds, tank barrels - from 210 rounds of armor-piercing sub-caliber rounds and up to 840 rounds of high-explosive fragmentation and cumulative rounds.

In other words, the “barrage of fire” tactics chosen by the General Staff of the RF Armed Forces require an exceptionally powerful material andtechnical bases. But we have another problem with this, and very serious ones.

On the one hand, many Russian military-industrial complex enterprises purchased modern foreign equipment in the fat 2014s, which in itself can only be welcomed. The Kazan Gunpowder Plant bought equipment in Germany, Austria and Switzerland, the Federal Research and Production Center "Altai", "Motovilikhinskiye Zavody" and other manufacturers of artillery, and developers and manufacturers of gunpowder and solid rocket fuels did the same. On the other hand, after the start of the anti-Russian sanctions war in XNUMX, the maintenance and timely repair of purchased imported equipment became more difficult, and dependence on foreign chemical components for the production of ammunition also arose. Plus, it is necessary to take into account the factor of "effective management", which has put a number of strategically important defense enterprises on the verge of bankruptcy and liquidation.

Whether the domestic military-industrial complex can quickly reproduce as many shells as they are spent at the front is a big question. Therefore, it is not surprising that the Western media, with references to their intelligence, report that Russia is now allegedly buying artillery shells from the DPRK. North Korea has powerful artillery of various calibers, and planned economy allows her to reproduce as much ammunition for her as needed without the “time shift to the right” that we are sick of. Let's hope that Iranian UAVs and ballistic missiles and North Korean shells will be enough to complete the liberation of Donbass, but then tactics, apparently, will again have to be changed to rapid breakthroughs and encirclements.

Also, do not flatter yourself with the fact that similar problems with "shell hunger" are now experiencing the Armed Forces of Ukraine and the countries of the NATO bloc standing behind them. Domestic media relish the complaints of Western military analysts that the existing stock of shells in the United States, Great Britain or France will only last one and a half to two weeks of high-intensity battles. Defense plants there, unlike the Russian Federation, remain intact, and production volumes can be quickly increased many times over. The financial year in the United States has just begun, and the American military-industrial complex will now receive funds to resume large-scale production of shells. So, it’s not worth counting on the fact that the “three axes” will be left without ammunition, and the Armed Forces of Ukraine will stop terrorizing Donetsk.

If you look at the picture as a whole, then it is, frankly, frightening, since there are too many parallels with the First World War in the NWO. Then the Russian Empire got involved in it to help Serbia, and the Russian Federation stood up for the DPR and LPR. We have already received a “great retreat” in the Kyiv, Chernigov, Sumy, Kharkov and Kherson regions, now there is a “shell famine”. What's next?
Reporterin Yandex News
Reporterin Yandex Zen
39 comments
Information
Dear reader, to leave comments on the publication, you must sign in.