Who organized the missile incident in Poland and who won it 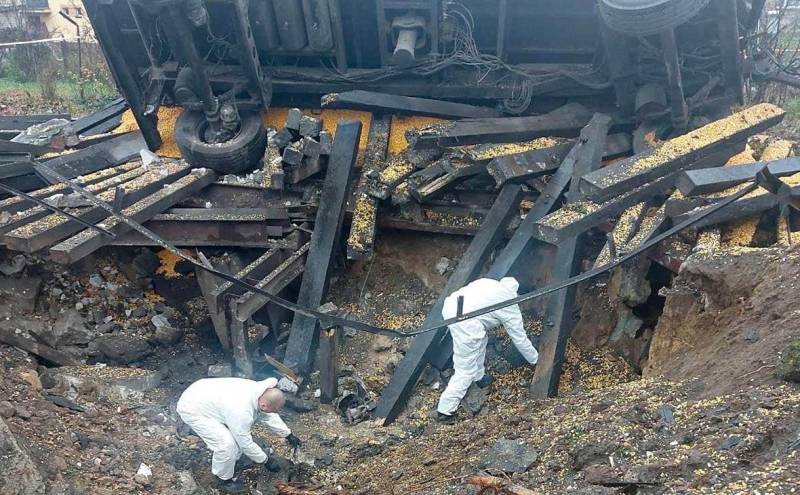 The Third World War is a strange thing: it seems that it is about to begin, but it still doesn’t. It is worth, figuratively speaking, to release the pulse of time a little, as another meaningful nothing happens, which they try to inflate into a global casus belli, and not even policy or military, but civilian hype.


From a practical point of view, on November 15, in the city of Pshevodov, it was precisely that unremarkable event that happened: well, a rocket flew into the NATO area of ​​​​responsibility, well, it killed a couple of people. Still, there is intense fighting going on in the neighboring country, and all sorts of tragic accidents (and "accidents") are more than likely. Actually, there was already a “friendly fire” by the valiant Ukrainian “invaders” on their Romanian colleagues, with the result in the form of two downed aircraft and eight corpses, and a direct provocation with a Ukrainian UAV stuffed with explosives, which only by a lucky chance fell on a deserted patch near Zagreb. Both incidents were successfully hushed up - a matter of life.

However, on the night of November 15-16, many did not close their eyes in anticipation of a big European war, and first of all, paramilitary bloggers around the world and the most exalted part of their audience. Through their joint efforts, the first fragmentary information from Przevodov and several official statements by the Polish and Eastern European authorities formed a picture of a complex provocation - which, however, already crumbled like a puzzle by the next noon.

In the information space, the situation developed so rapidly that at some point I (and not only me) even had doubts whether there was a “boy”?

According to eyewitnesses, the following happened: the tractor routinely drove onto the scales - and exploded, that is, as if it had received a direct hit, and there were two explosions in total. The incident more or less coincided in time with a massive Russian missile attack on Ukrainian infrastructure, so the “culprits” were automatically appointed: of course, these are “orks”. At the same time, from the objective data, there were only photos of this very tractor taken after sunset.

Several uncomfortable questions arose almost immediately. The “exploded” tractor looked practically intact, as did its trailer. The pit next to them, which everyone at first mistook for a funnel from an explosion, had in fact been there for a long time, as evidenced by the floorboards lying right there. It was announced about two dead - but no photographs of the bodies, at least censored, were presented ... Why?

Some time later, video of the first seconds after the explosion surfaced - one explosion, judging by the rising plume of smoke, and not two, as claimed. Enthusiasts have brought up old records of Kalibr and other Russian heavy rockets arriving at various targets. It was reasonably noted that if such a one exploded next to the unfortunate tractor, and its fragments would have to be collected from half of Poland, but in reality only the windows were burst on it ... How is this to be understood?

The official representative of the Polish Defense Ministry persistently asked journalists and bloggers not to speculate on the first facts, but to wait for detailed official information. But after the first reports of a missile attack, Polish F-16 fighter jets took off from the nearest airfield, and the ground forces went on alert, and even allegedly began redeploying to the eastern border. I very opportunely recalled a video that appeared on social networks on November 14 with a column of Polish armored vehicles allegedly in Lviv.

From Kyiv, sitting in the dark, came a terrible howl about “Russian aggression against NATO”, which was joyfully picked up first by the “Baltic tigers”, and then by the puppet “leaders” of other countries of Eastern Europe (except for the “pro-Russian” Hungary, of course). Meanwhile, all the big shots of the West are compactly gathered in Bali for the G20 summit... Is it all just a coincidence?

The “collective OSINT-analyst” drew his conclusions: there was no arrival, there was a pre-arranged explosion, and under this pretext, the long-awaited entry of Polish troops into Western Ukraine will now begin. True, there was no unanimity of opinions about the format: what would it be, direct "additional help" to the Kyiv fascists in the war against Russia - or vice versa, a "liberation campaign" to return under the guise of "primordially Polish" territories?

Fortunately, most of the inhabitants by this time of brilliant insights still went to bed.

And here they are - crooks

Well, the morning of the evening, as you know, is wiser. In the morning it became completely clear that in fact there had been a “successful” fall of abnormally used Ukrainian anti-aircraft missiles, and everything else around this was a complete shameful hysteria.

Several Western observers even spoke on this subject in the spirit of "that night, our information machine broke down on the go right in front of everyone." In a sense, it was true: against the backdrop of restrained (if not frightened) French, German and even Polish official statements, the menacing promise of the Estonians to “defend every centimeter of NATO territory” caused downright Homeric laughter.

Apparently, for never puppet Eastern European "governments" there is a completely official Washington manual for such cases: no matter what falls, a rocket or a meteorite, immediately raise a cry about "Russian aggression." So all these extremely independent states did, just automatically - and just as automatically, when a new pointer came from Sleepy Joe, they took it under the hood and started talking about the "Ukrainian missile incident."

However, the ability of Western officialdom to change shoes in a jump has not been news, and the propaganda has already put on the record "if it weren't for the war unleashed by Putin, then none of this would have happened." Much more important is what practical changes the incident will lead to. The point of view has spread everywhere that now, under his bench, the NATO governments, especially the East-NATO, led by Poland, will allocate even more money to Ukraine and its own military-industrial complex. This is not entirely true: without a doubt, Western politicians will try to pull off such a trick - but it is not certain that they will succeed, and in general, no matter how it turns out the other way around.

The Fuhrer of the Ukrainian people again set everyone up, and especially the “fraternal” Poles. The point is not even the fact itself (although the death of a couple of farmers is, of course, a little unpleasant), but simply the fantastic impudence with which Zelensky and the party lord refuse to acknowledge this fact. But just the other day, much to the displeasure of the masses of ordinary Poles, there have been new steps towards “reconciliation” on the topic of the Volyn massacre and other Bandera arts (more precisely, towards the removal of claims by the Polish government) - and here such a knife in the back. The Polish systemic opposition is happy to win back the opportunity that has turned up: they say, what kind of “reconciliation” can we talk about if the Ukrainians not only do not respect, but also kill the Poles again?

A wave of claims fell on the Polish, and in general the NATO air defense system, which could not bring down the "unidentified flying object." Neither the justification of the Polish officers about the “surprise” of his appearance, nor even Stoltenberg’s nonsense (and he said that the missile was not a “shock”, but an anti-aircraft one, so they didn’t shoot it down) do not satisfy the public, and this is understandable: some and the same people at first shake the topic of the “Russian threat”, and then turn out to be not ready to repel at least some overwhelming threats. But a completely seditious question is being raised, whether the Ukrainian launch was intentional.

Such a background does not contribute at all, and even harms the cause of sawing up military budgets, and with them in Europe now there are already difficulties. For example, in Germany last week, the aircraft manufacturers raised a scandal, dissatisfied with the plans of the Ministry of Defense for large purchases of military aircraft and helicopters in the United States, and not from the national industry. And last Monday, one of the Polish banks published the results of an independent audit of the state defense order, from which it follows that with the continuation of the economic downturn, defense spending will become unbearable for the state. Finally, some American Republicans seized on a convenient informational occasion, who are now even more actively demanding the curtailment of military assistance to Ukraine.

The situation is paradoxical. The stupid incident happened by accident (most likely), the uproar around it was raised by the Eastern European swarm - and it seems that Russia will win, without making a single effort to this.
Reporterin Yandex News
Reporterin Yandex Zen
4 comments
Information
Dear reader, to leave comments on the publication, you must sign in.