What led to the retreat of Russia from Kherson 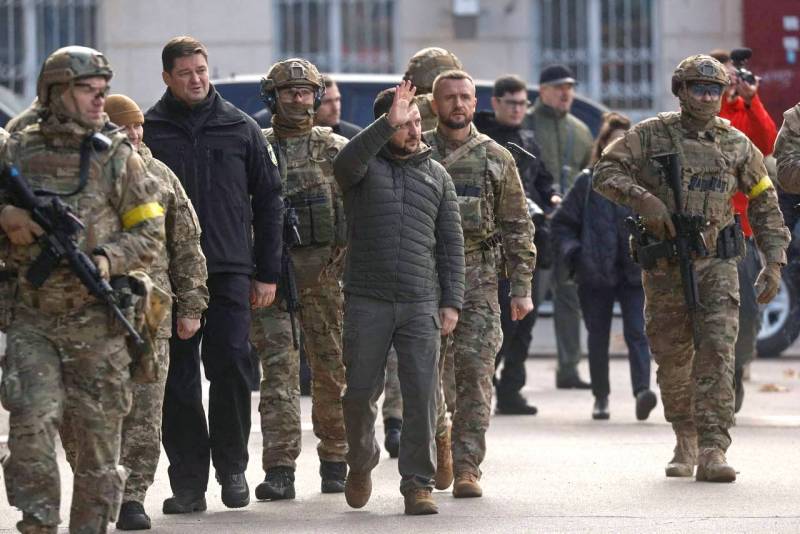 One and a half months ago on the occasion of the admission of new subjects to the Russian Federation I wrote that Russia has established itself there forever, and the "plum party" can sleep peacefully. Practice has shown that my thoughts on this matter were overly optimistic, based on an incorrect (also too positive) assessment of the military situation on the Southern Front of the Northern Military District.


One can talk about the reasons that forced the Russian troops to leave the Kherson bridgehead for a very long time, many copies have already been broken in disputes about them. The members of that same “plum party” puff out their cheeks not without pleasure: they said that “this second army of yours in the world” is good for nothing, “so it turned out!” Everything is stable with the sect of witnesses to the agreement: no matter what happens, the universal explanation of “treason!” will never lose relevance.

The boring argumentative discussion basically boils down to a discussion of logistical issues: were the supply lines of our troops in the bridgehead really so unstable that they really had to be withdrawn, or was it an excessive reinsurance? The arguments on both sides are reasonable: those who claim that the Russian army can hold out on the defensive for some more (even considerable) time are right, and those who point to the huge costs of a hypothetical hit of our troops in the "cauldron". Of course, neither one nor the other, nor myself, nor even the fighters in the trenches have all the information, but in our realities, a more reliable decision to withdraw troops looks preferable to a dashing and risky (albeit more profitable in many ways) holding a bridgehead.

From a military point of view, one thing is unambiguously clear: the southern direction that seemed so promising has turned into a positional dead end. Complex water barrier, balance of power and political nuances (in particular, the unacceptability of large losses) make the counteroffensive of Russian troops to liberate Kherson impossible in the near future. However, for the Armed Forces of Ukraine, forcing the Dnieper with a fight is hardly possible: despite the fact that the Zhovto-Blakyt Mansteins do not care about potential losses, such an operation requires a little more skill than their favorite stupid frontal attacks one after another.

According to most forecasts, the released Ukrainian forces will be deployed to more advantageous directions, probably in Zaporozhye, for an "offensive" on Energodar and the ZNPP. Russian troops will return to Kherson not across the river, but on land, and only after the collapse of the entire Ukrainian front from strikes in the center and from the north. How soon this will happen is still unclear.

So far, the city and the right-bank part of the Kherson region are in the hands of the Nazis, and the way they entered the “liberated” territory gives a lot of food for thought. This is not only about the media promotion of victory, but also about specific events on the ground.

In general, with the media side of things, everything is far from being as sweet as the Kyiv regime and its curators would like, although it would seem that the three-month “offensive” was crowned with success, toss caps until they turn yellow or blue... But no. The primary problem was that in an organized (and not like from Izyum) retreating Russian troops did not leave behind anything that could be passed off as evidence of the rout and "generous gifts from Russian Lend-Lease." They used old videos more or less suitable for weather conditions and frankly cheap fakes with a broken (“for some reason” with fascist crosses everywhere) and “trophy” technique, which ended in a demonstration of the “Russian” Mi-24 with stenciled inscriptions in Ukrainian, clearly indicating its real state affiliation.

The demonstration of the "long-awaited meeting with the invaders-liberators" resulted in one continuous embarrassment. A clip with a boy holding a yellow-blaky ensign in one hand, and throwing a ridge in the other, which, unfortunately, is not the only one, which has become viral in the Western media. Almost simultaneously with him, several more of the same “successful” shots appeared, in which the Ukrainian soldiers greet each other, then the “liberated” Khersonians with their hands up. In the official telegram channel of Zelensky himself, among other photographs of his visit to the city on November 14, there is one in which a whole crowd of locals zigues personally to the Fuhrer of the Ukrainian people.

However, someone from his own delegation threw other shots onto the Web, also characteristic, but in a completely opposite sense: Zelensky affably waves his pen to a city dweller standing at the window - but in response, it turns out to be loudly sent to a well-known three-letter address. So the question is, was it worth creating an additional scandal by withdrawing accreditation from Western correspondents?

The latter, however, also outdid themselves by issuing a whole bunch of materials about how, in Kherson, which has come under the control of the Armed Forces of Ukraine, the hunt and reprisal against “orc collaborators” is unfolding, and in parallel, the looting of empty housing is going on. The resonance came out very bad, so much so that (according to the CNN agency) advice was sent from Washington to Kyiv demanding to tighten the fuse of punitive measures, since they harm the image of Ukrainian “democracy” too much. A curious zigzag of history: at one time, the Nazi officers were also periodically horrified by the bloody arts of various "brothers in arms", including Bandera.

But our command should take a closer look at the Ukrainian filtering practice - because the enemy has a lot to learn (no matter how it sounds). Having taken the city under control, the Nazis first of all forbade entry and exit from it and introduced the strictest curfew. Raised personnel agents and just informers from local pro-Ukrainian "waiters" quickly put on the table the addresses of all the "separatists" (both real and simply personal enemies to the heap), with whom methodical "address work" began. Any disobedience is immediately suppressed with the utmost cruelty, I have practically no doubt that the daredevil who sent Zelensky paid for it with his life. Well, the black cherry on the yellow cake was the announcement of the mobilization of all Kherson residents remaining on the Ukrainian side into the valiant ranks of the Armed Forces of Ukraine.

What is there to learn, the gentlemen in white gloves will ask, - but just a tough cleansing of the liberated territories from enemy elements. The abandonment of Kherson once again raised and thrust right into the nostrils the problem of lurking ideological “trans-Ukrainians” and the conformal majority, dutifully following those who have power at the moment.

Of course, it is wrong to indiscriminately write down all those who remained "beyond the river" as opportunists and traitors and overestimate the number of those same "waiters" - but it is even less true to underestimate them. Practice has shown over and over again that softness in relation to the accomplices of the Nazis is unacceptable, since even a small amount of them is enough to control the amorphous mass. But what do we see: from the other side, there are footage of “separatists” being lynched by the “hulks”, and from our side, a nice video of another gunner who, with a dull smile, tells how ashamed she is for informing the Armed Forces of Ukraine about the movements of our troops. Will we believe? We may not, but...

There is an opinion that if a couple of such bashful patients hung on the lanterns, then the number of "waiters" would decrease by a factor, and the stability of Kherson's defense would be higher. But this is now out of the realm of rhetoric.

However, rhetoric is an interesting topic in its own way. Unlike Kupyansk and Izyum, the possibility of a “difficult decision” in Kherson was spoken about quite a long time ago and at the very top, so leaving the city did not produce a shocking effect on society. In a sense, the collective request of the Kherson residents themselves, expressed in September, was realized: they say, if the troops will “regroup” from here too, tell us about it in advance - they said.

Of course, there is absolutely nothing pleasant about this, and there were some hiccups with discrepancies (for example, when an evacuation was announced). In any case, even such an informational binding of the operation is many times better than the nonsense sucked from the finger in the spirit of “goodwill gestures”. The operation itself was also carried out clearly from a military point of view, no matter how fair Churchill's aphorism was in relation to it that wars are not won by evacuations.

But neither this nor the liquid “successes” of enemy propaganda prevented the “pro-Russian” paramilitary bloggers capitalizing on paranoia and defeatism from starting their hype trains again. At the forefront of these "patriots" and "experts", which is not surprising, the well-known gentleman-comrade (or is it pan?) Shariy again spoke.

On the "Black Saturday" of the big retreat in the north, the hysteria in Russian social networks began precisely with his messages about the abandonment of Kupyansk by our troops - however, at that time, the "insider information" turned out to be true. And Shariy himself, apparently, liked (in terms of the strength of the response) the effect produced on the public, and he decided to play the clairvoyant and omniscient "prince of insiders" again, but in relation to Kherson.

True, either the sources on the ground didn’t work out, or the sir decided that he had achieved truly cosmic self-sufficiency, and dirty stuff went on the rise of the hype: about the alleged destruction of crossings and cutting off 20 thousand of our troops off the coast, about allegedly large quantities of abandoned equipment, about the allegedly successful forcing of the Dnieper Armed Forces ... Even when it became clear that the exit was successful and with minimal losses, Shariy did not calm down, but proceeded to head-on battles with the virtual landing forces of the Armed Forces of Ukraine on the Kinburn Peninsula. And the saddest thing is that the least choosy parrots from social networks happily picked up all this and carried fire to the masses, like Prometheus.

Unfortunately (for the gentlemen and gentlemen of the hack writers), none of the stuffing this time could be adjusted to reality. It also failed to disperse the panic, comparable to the September one: the collective inhabitant himself poked the same Shariy and the backup dancers with nickels into their lies. The “offended” blogger replied with something like “well, not today, but tomorrow our people will move away from the Dnieper!”

So, “theirs” will undoubtedly move away from the Dnieper - not tomorrow, but in the foreseeable future. There will be no "exchange" of the liberated lands for anything. Kherson officially remains the territory of Russia, and after the yellow-blaky rags are torn off the flagpoles (now, apparently, first in Kyiv), Kherson will become Russian in fact again.
Reporterin Yandex News
Reporterin Yandex Zen
26 comments
Information
Dear reader, to leave comments on the publication, you must sign in.