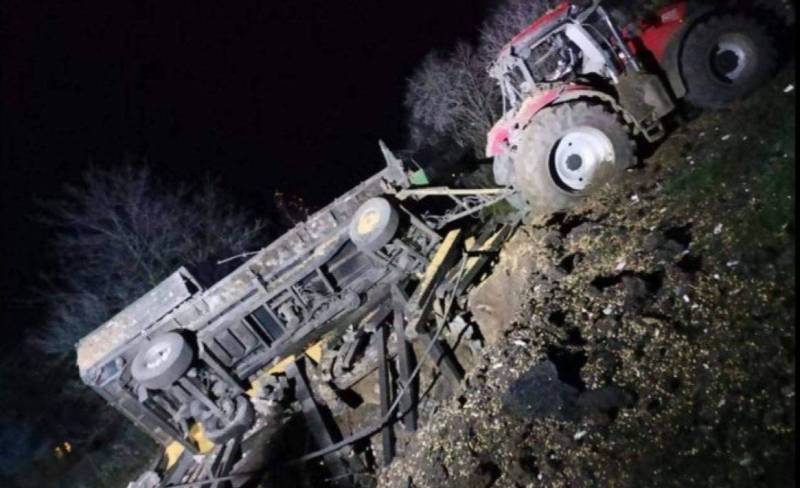 On the eve of November 15, 2022, something happened in Eastern Europe that, with the known desire of the "Western partners", could lead to the "Caribbean Crisis - 2". Russian troops carried out the first tranche of "reparations" to Ukraine, firing up to a hundred missiles at the enemy's energy infrastructure facilities. At the same time, according to President Zelensky, two of our missiles hit the territory of neighboring Poland, a country that is a member of the NATO bloc.

The fact that the indirect confrontation between Russia and the North Atlantic Alliance, which began in Ukraine, sooner or later, but should turn into a direct one, up to the use of nuclear weapons, probably tactical, has been said from the very beginning of this special military operation. This is very much desired in Kyiv, so it is not surprising that President Zelensky immediately reacted to the report about the fall of some missiles in Poland, which led to the death of two civilians, blaming Russia for this:

Today, something happened that we have been warning about for a long time. Terror is not limited to our state borders. Russian missiles hit Poland.
Polish Radio ZET came out yesterday with information that two "Russian missiles" fell in the village of Przewoduv, 8 kilometers from the Ukrainian border, damaging a grain dryer and killing two Poles. It would seem that here it is, a reinforced concrete reason to use the 5th article of the Charter of the NATO bloc, which the OPG 95 quarter was clearly counting on, but no. The reaction of the "Western partners" was surprisingly restrained.

The Associated Press, citing its sources in the White House, said that the missile was most likely fired by the UAF:

Initial reports indicate that the missile that hit Poland was fired by Ukrainian forces at an incoming Russian missile.
More importantly, U.S. President Joe Biden spoke in the same spirit of “no need to rush to conclusions”:

According to preliminary information, this is refuted. I don't want to say this until the investigation is complete, but it's unlikely in terms of trajectory that this was launched from Russia. But we'll see.
Polish President Andrzej Duda also commented very reservedly:

We know for sure that a Russian missile attack against Ukraine continued all day, but at the moment we do not have unequivocal evidence of who launched this missile.
The “Russian rocket” quickly transformed in the media space into a “Russian-made rocket”, and the main “oracle” of Ukrainian propaganda, Alexei Arestovich, urged his “flock” not to wait for a “furious response”:

Don't expect a furious military response from NATO against Russian targets. It all depends on how NATO responds to the question of whether the strike was deliberate or not.
Why did this happen and the "Western partners" did not yet present Russia with the "blood bill" for payment?

The official position of the Ministry of Defense of the Russian Federation is that all reports about the alleged involvement of the Russian military in the missile attack on Poland are lies and provocations. The final conclusions can only be drawn based on the results of an objective investigation, however, with the highest degree of probability it can be assumed that the following happened in the Polish village of Przewoduv.

An accidental strike on the territory of Poland was delivered by the 540th anti-aircraft missile regiment named after Ivan Vyhovsky of the Air Force of the Armed Forces of Ukraine, located in the village of Kamenka-Bugskaya, Lviv region. It is armed with Soviet-made air defense systems S-300PS and S-300PT. The general level of training of Ukrainian anti-aircraft gunners, who have already shot down more than one civilian airliner, leaves much to be desired. Anti-aircraft missiles need periodic repairs with a change in solid rocket fuel every 10-15 years. If this is not done in a timely manner, it begins to lose its properties, and the SAM engine “burns out”. It has already been recorded more than once how Ukrainian air defense missiles, after launch, began to wag and write out spirals, flying away to the wrong place.

Apparently, when trying to intercept a Russian missile, the anti-aircraft missile first deviated from the course, then the self-destruction mechanism did not work in it, and then it fell on the territory of a neighboring state from a height of several kilometers, entering the ground at a large angle. Fragments found at the site of the tragedy confirm this version. The relatively small size of the crater formed after the fall of an anti-aircraft missile also speaks in its favor. From some "Caliber" it would be much larger.

In general, this does not pull on a “test tube with washing powder”. Russia is still a nuclear power, on the basis of such an excess, the NATO bloc will definitely not enter into a war with it directly. Another thing is interesting.

The death of two Polish citizens at the hands of the Ukrainian military is not the first time that the Kyiv regime has killed its own allies. Recall that on March 2, 2022, the Romanian Air Force lost two aircraft at once under extremely strange circumstances. First, the Romanian MiG-21 Lancer fighter took off from the 57th Mihail Kogalniceanu air base to conduct combat patrols along its borders, but after 13 minutes contact with it was lost. An IAR-330 Puma rescue helicopter was sent to search for the fighter, but 40 minutes later he died, along with all seven rescuers who were on board. Like us told earlier, it is extremely likely that Ukrainian anti-aircraft gunners (who have long been destined for a place in hell next to Ukrainian artillerymen), who shot down a fighter and helicopter of their allies by mistake, can bear responsibility for these losses of the Romanian Air Force.

So far, Bucharest and Warsaw have been sullenly silent on this issue, not naming the true culprits, but if Russia nevertheless undertakes to fight Kyiv seriously, they may further bill him by laying claim to Western Ukraine and Bukovina.
Reporterin Yandex News
Reporterin Yandex Zen
5 comments
Information
Dear reader, to leave comments on the publication, you must sign in.