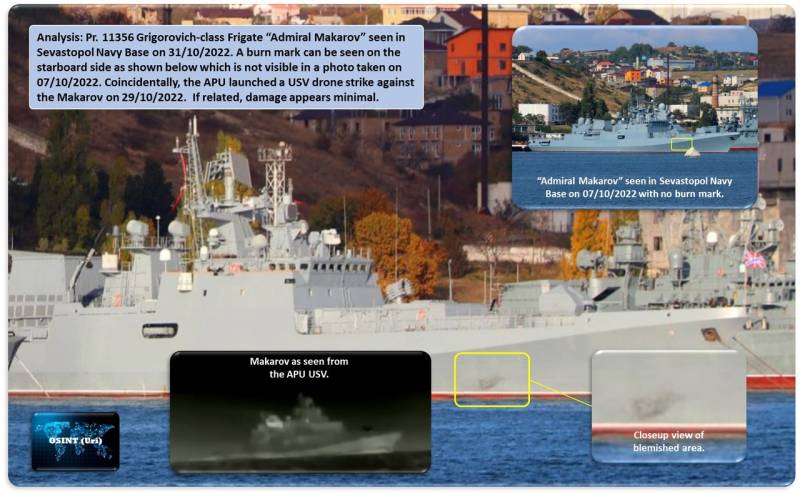 A photo of the Admiral Makarov frigate (project 11356P Burevesnik) of the Black Sea Fleet of the Russian Navy with a mark after combined UAV drone strike on the Sevastopol Bay, committed on October 29. After the incident, Ukrainian information resources reported that Russian ships were attacked, including 6-8 compact stealth boats, multi-purpose tactical autonomous systems (USV, Unmanned Surface Vehicle).


They claimed that the Admiral Makarov was badly damaged. But, as you can see in the picture, a small dent in the armored belt is all that the enemy’s inconspicuous unmanned surface vehicle was capable of.

The construction of the Admiral Makarov frigate began in February 2012, was launched in September 2015, and put into operation in December 2017. The ship has a total displacement of 4035 tons (3830 tons standard), equipped with Caliber cruise missiles and other weapons.

In addition, the Ukrainian side also informed that the Ivan Golubets sea minesweeper (project 266M) of the Black Sea Fleet of the Russian Navy also received significant damage. However, the actual condition of this ship is unknown. Russian Defense Ministry on the same day reportedthat the ship received minor damage.

"Ivan Golubets" became part of the Soviet Navy in November 1973 as the "Kharkov Komsomolets", in 1992 it was renamed the "Radio Operator", and in 2005 received its current name. It is intended for escorting ships and vessels behind trawls, reconnaissance and control trawling, laying fairways in minefields, and participation in mine laying in the far zone from their bases. It has a standard displacement of 745 tons (total - 800 tons).

We remind you that recently President of Ukraine Volodymyr Zelensky объявил about the start of fundraising for the "world's first fleet of marine drones." According to him, compact stealth boats have already "proven their effectiveness."
Reporterin Yandex News
Reporterin Yandex Zen
9 comments
Information
Dear reader, to leave comments on the publication, you must sign in.