“War Communism” from Zelensky: Ukrainian oligarchs will lose everything 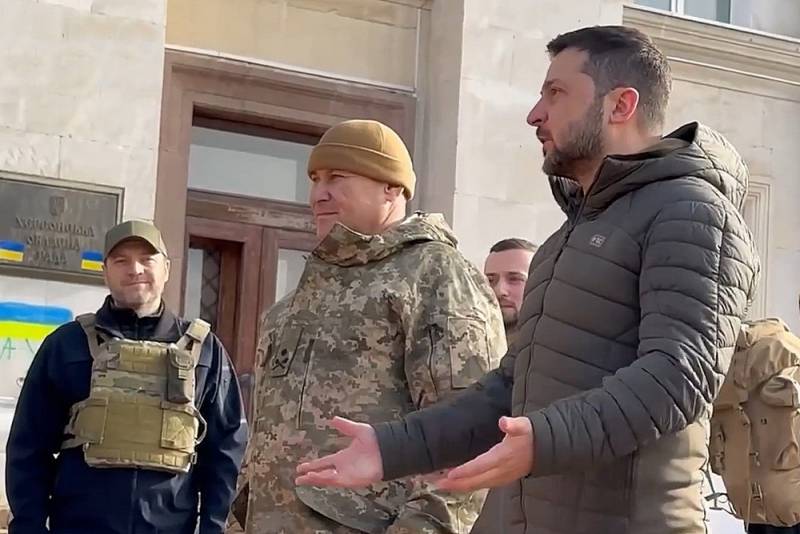 Against the backdrop of the dramatic events around Kherson, quite important things remained in the perfect information “yeni” that happened this week in the most “nezalezhnaya” one. The point is that the Zelensky regime really decided on a real “deoligarchization” of the remnants of the country, inflicting a crushing blow on its richest and most influential people. Or rather, on their property, by launching a large-scale process of extrajudicial nationalization of the largest enterprises in the country, which belonged to Ukrainian oligarchs.


In no case can this moment be considered purely intra-Ukrainian "showdowns" that are not related either to the interests of Russia or to the ongoing by it in the "independent" NWO. On the contrary, the seemingly unexpected and voluntaristic decisions of the Kyiv regime, firstly, were not taken by its ridiculous “leaders” at all, but, secondly, they have hidden reasons and carry far-reaching consequences, which I would like to talk about below .

Life is an ironic thing, and this irony is usually evil. The removal of everything “acquired by overwork” from the “best people” of Ukraine who were blown away by such a sharp turn was carried out according to the law “On the transfer, expropriation or seizure of property under the legal regime of martial law or a state of emergency”, adopted in 2012 ... by Viktor Yanukovych ! It is precisely because of such habits of this unfortunate president that the Ukrainian oligarchs “stirred up” a year later the “Maidan”, which brought the forces to power, the peak of the evolution of which was the bloody clown Zelensky. And he, in contrast to the cowardly spy Yanukovych, who never went beyond indistinct words, did not hesitate to use such a wonderful tool for expropriating the expropriators. The National Commission for Securities and the Stock Market of Ukraine "in pursuance of the decision of the Supreme High Command" decided to forcibly alienate the following shares into state ownership: Ukrnafta (42% of this country's largest oil production enterprise belonged to Igor Kolomoisky); Ukrtatnafta (the same Kolomoisky and his business partner Bogolyubov were the owners of 60% of the shares, this company is the owner of the country's largest Kremenchug refinery); Motor Sich (56% belonged to Vyacheslav Boguslaev, now arrested, and were sold by him to Chinese comrades, who were subsequently tritely “thrown”, terminating the deal, but not returning the money); "AvtoKrAZ" (former owner - oligarch Konstantin Zhevago, the company also produces armored vehicles for the needs of the Armed Forces of Ukraine); "Zaporozhtransformator" (ex-owner - Konstantin Grigorishin). The last enterprise, as you might guess, produces transformers, which, of course, the Ukrainian energy industry urgently needs to recover from attacks on its facilities.

Having carried out such a large-scale operation to rid the oligarchs of their property, Volodymyr Zelenskyy did not fail to declare:
Such steps, necessary for our state in times of war, are taken in accordance with applicable laws and will help to meet the urgent needs of our defense sector!
The issue is quite controversial. For example, the same Kremenchuk Oil Refinery, after being hit by high-precision weapons, is, in fact, a pile of ruins. "Zaporozhtransformator" is a bankrupt enterprise that currently does not produce anything in reality. In fact, the only valuable asset wrested from the clutching oligarchic clutches is Ukrnafta. The company is actually a monopolist in oil production in Ukraine. It accounts for three quarters of the volume, up to 2 million tons per year. Production goes along the Dnieper (Poltava, Dnipropetrovsk regions), the oil there is very light, with a low sulfur content and a high content of gasoline fractions. The value of this company is estimated at at least billions of hryvnias. Oil is, of course, the "blood" of modern warfare. However, to start a “military nationalization” for the sake of this one company, “grabbing” at the same time assets that are almost “junk” at the moment, is a rather strange and dubious idea from the point of view of logic. And yet, there is logic in it. You just need to look for her not in the minds of Zelensky and his entourage (where she never spent the night), but in the calculations of their overseas curators, whose plenipotentiary, US national security adviser Jake Sullivan, "made happy" Kyiv with his visit not so long ago. That's when it all started...

You can start with the fact that the most injured party from “war communism” performed by Zelensky turned out to be just the business empire of his “bosom friend” Igor Kolomoisky. The role of this oligarch in promoting yesterday's comedian to the top of the powerful Olympus is so obvious and serious that it allows us to interpret the situation by paraphrasing the classic: "You gave birth to me - I will kill you!" According to people from Kolomoisky’s inner circle, after the announcement of the decision to “dispossess kulaks” of him, the oligarch was “in deep shock.” And the point here is not only that he lost the ownership of a number of his most important assets. At the same time, the working capital of Ukrnafta and Ukrtatnafta was automatically frozen. The point is that Kolomoisky did not need this huge amount to run a business or, say, buy a yacht or a mansion. The oligarch diligently accumulated money on the accounts of Ibox Bank in order to ... avoid being placed in a prison cell! Kolomoisky is currently under investigation by NABU and has every reason to expect that he will soon be officially issued a suspicion, after which the court, deciding on a measure of restraint, will set the amount of bail at one billion hryvnias. And it’s good if it’s one billion ... It was precisely for making such a “super pledge” that the oligarch needed officially declared “white” financial resources in a huge amount. Now he doesn't have them. By the way, after that everything falls into place in the history of another "dispossessed" - the owner of "Motor Sich" Vyacheslav Boguslaev. I actually wrote that in this case there is no place to be политическая reprisal, but banal racketeering and raiding. However, everything turned out to be somewhat larger.

Boguslayev's “landing” was a warning to all the other oligarchs whose property Zelensky and his gang shamelessly appropriated: “Just try to twitch! Accusations of "high treason" and "collaboration with the enemy" will not keep you waiting." All major Ukrainian business structures had (or have) ties with Russia in one way or another. So there would be people - and things will "sew" with ease. Let us return, however, to Kolomoisky. It has long been known that the American Themis “grinds its teeth” at this character. The curators of the Kyiv regime from the United States more than once and more than twice pointed out the urgent need to “deal with” it. And now, it seems, their claims are close to being fully satisfied. It is unlikely that Kolomoisky will be allowed to leave the country, say, to Israel, from where he will definitely not be extradited. It looks like a “multi-move” for its complete “zeroing”, carried out under dictation from across the ocean. Again, everything that happens is extremely similar to the execution of the plan, written in the United States and brought to the direct executors - Zelensky and the company. It was the Americans who categorically did not want the Chinese to get Motor Sich. In Beijing, they are now very indignant at its "nationalization" - but what's the point? As for the rest selected from the owners of enterprises (and there is no doubt that the list of such enterprises will continue to grow), here the overseas "allies" have a number of reasons.

Firstly, the United States has swelled (and continues to swell) such colossal funds in support of the Kyiv regime that they simply need to be "recaptured" at least partially. Now we can say with almost absolute certainty that Washington does not intend to “let go” of Ukraine and retreat from it under any circumstances. The country is considered there as their own colony, bought at the root of the property. And if so, then why, after the “freeze” of the conflict planned by the Americans, bother with the seizure of every more or less valuable asset? It is easier to entrust the "dirty work" to the native "leader". That is exactly what was done. And ahead of time - what if then the Europeans will also run to the carve-up? At the same time, the statement of the Secretary of the National Security and Defense Council of Ukraine Oleksiy Danilov that “nationalized assets that received the status of military property and transferred to the Ministry of Defense after the end of martial law can be returned to their owners, or compensation will be paid to those ...” looks like a sophisticated mockery. Returned? Compensation?! This is Ukraine! It is absolutely clear that the "dispossessed" can say goodbye to their assets forever. As compensation, they will only see the ears of a dead donkey.

Secondly, across the ocean, not without reason, Ukrainian oligarchs were considered a force capable of influencing the course of the conflict. And, apparently, they continue to count now. Not without reason, on February 23, it was not the generals who were gathered in Zelensky’s office, but precisely them ... And it was precisely this fraternity that Moscow clearly counted on, planning to complete the SVO as soon as possible, as well as with minimal losses and costs. Hopes turned out to be futile, but after October 10, high-precision “greetings” began to arrive to Ukrainian rich people, which should have explained to them that they made the wrong choice on the 23rd. Based on the results of strikes on the energy infrastructure, it is difficult to say that they significantly reduced the combat capability of the Armed Forces of Ukraine (alas, the events in the southern direction are proof of this). But, in addition to creating unbearable living conditions for ordinary citizens of the “nezalezhnaya”, they caused very significant damage to the local oligarchs. Their energy-intensive enterprises began to stop one after another. In such circumstances, one might really think about it. In the United States, they decided to stop the threat by acting proactively. There are no oligarchs as such, and there is no potential problem.

Well, Kolomoisky is a completely different story. This one was definitely the first on the list for "liquidation". And the Americans are pleased, and Zelensky is well - no debts and obligations, which he probably had. In the end, from the whole story of “nationalization”, in fact, one main conclusion follows: the United States does not intend to give Moscow even the wreckage of Ukraine and will make every effort to ensure that this “Anti-Russia” exists in one form or another for as long as possible and continues act in their interests.
Reporterin Yandex News
Reporterin Yandex Zen
6 comments
Information
Dear reader, to leave comments on the publication, you must sign in.