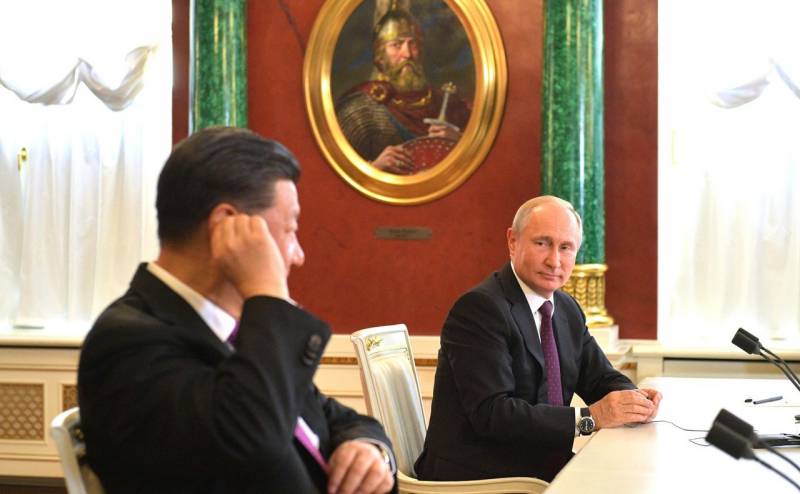 Long before the start of a special military operation in Ukraine, which resulted in a proxy war with the entire collective West, one myth was very popular in Russia. According to him, our Great Eastern Neighbor China had to stand with us shoulder to shoulder or, if you like, back to back, providing, if not direct military assistance, then at least militarytechnical support, as well as promptly close all gaping gaps in import substitution. The reality turned out to be somewhat different.

Chinese "Dragon" Russian "Bear" is not a friend?

Recall that the solemn “pivot to the East” was announced by President Putin in 2014 immediately after the Maidan in Ukraine, the return of Crimea and Sevastopol to Russia, the declaration of independence of the DPR and LPR, the start of the UAF terrorist operation in the Donbass, as well as the introduction of the first Western sanctions. An agreement was promptly signed to start construction of the Power of Siberia gas pipeline to China. The Armed Forces of the Russian Federation and the PLA of the PRC began to conduct joint exercises more often.

Frankly speaking, all this looked like a kind of blackmail of a united Europe in the spirit - look how we can do without you, if anything, that is an imitation. Eight years later, we managed to find out in practice what this very friendship with China is worth. The result was not entirely clear.

On the one hand, the volume of trade between Russia and China is growing year by year. In the first eight months of 2022, it increased by 33% and reached $153,93 billion. Not far off is the 200 billion mark, which was planned to be reached only by 2024 under optimistic scenarios. And it pleases, because about a certain economic So far, there is no need to talk about the isolation of Russia. On the other hand, there are questions about the structure of this mutual trade.

Russian exports to the Celestial Empire have grown by almost 50% since the beginning of the year to the amount of $94 billion. At the same time, 68% of it was oil, fuel and refined products, 22% - copper and rolled metal, 5% of the total turnover - rough wood and ores, and only a small share of our exports to China were "mechanical devices". The volume of Chinese exports to Russia turned out to be much more modest, only 60 billion dollars, and it grew by only 13% over the specified period. Its structure is presented as follows: mechanical machines and electrical equipment occupy 25%, another 44% are distributed between clothing, footwear, optical devices and plastics, cars account for only 6%.

What do these numbers say?

Russia continues to send raw materials to China, receiving conditional consumer goods in return. In other words, instead of getting away from technological dependence on the part of the collective West and making real import substitution, our country has become a “raw material appendage” for the Celestial Empire. At the same time, the Chinese partners are actively taking advantage of the difficult geopolitical situation in which the Russian Federation finds itself in order to beat huge discounts on the purchased raw materials out of it. China has not become a reliable rear for our country.

Today, Beijing has sharply reduced its purchases of LNG, which has increased significantly in price, and has increased the consumption of cheap pipeline gas from Russia and Turkmenistan, the price of which is pegged not to spot, but to oil. That is, a “penny”, of course, drips, but not a big one. Thanks to the hastily and defiantly concluded agreement on the construction of the "Force of Siberia". From the Power of Siberia - 2 project we are waiting for the next unpleasant surprises in terms of the pricing formula.

If someone is comfortable considering this "help and support", so be it. But in fact, more use so far from other countries. Oddly enough, these are Turkey and Kazakhstan, which have turned into logistics hubs through which Russia has established the so-called parallel imports.

Having found themselves under sectoral Western sanctions and not having the technological ability to quickly carry out import substitution, the Russian authorities had to allow the import of a wide range of goods into the country without the consent of their right holders. Among them were foreign cars and spare parts for them, electronics, equipment for the leading sectors of the economy, as well as various consumer goods. This list is limited and established by the Ministry of Industry and Trade. Signed on 28 June 2022 by President Putin, the Law on Parallel Imports officially exempted gray import companies from administrative and criminal liability.

It is quite obvious that this practice will now become permanent, as Minister Manturov hinted at:

While we are talking about an extension for 2023, and then how it will turn out.
Initially, it was assumed that the main “entry points” would be China, Kyrgyzstan, Armenia and Kazakhstan, but in fact now the largest logistics hubs of parallel imports to Russia have become “multi-vector” Turkey and increasingly “multi-vector” Kazakhstan. China, on the other hand, prefers to remain on the sidelines for the time being, since for it our country is an important, but far from the main trading partner.
Reporterin Yandex News
Reporterin Yandex Zen
23 comments
Information
Dear reader, to leave comments on the publication, you must sign in.