Is the unmanned fleet of Ukraine so dangerous? 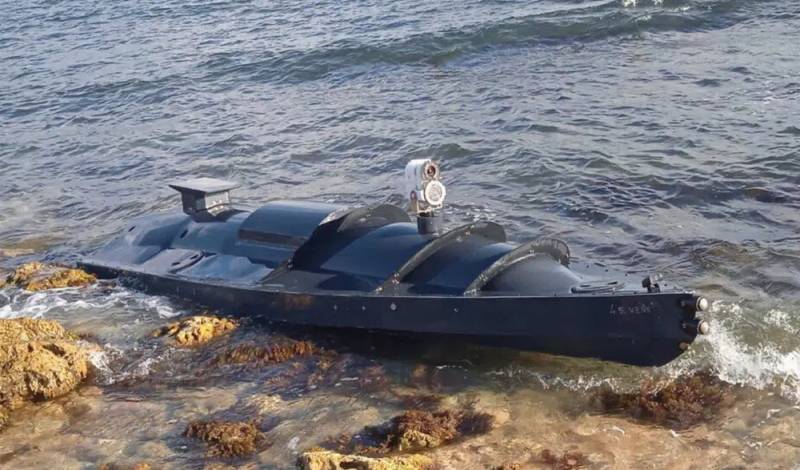 
The massive raid of Ukrainian unmanned fireships on the Sevastopol Bay, which took place on October 29, has already acquired the fur of "legendary". And although this was indeed the first attack of this kind in history, carried out mainly by unmanned vehicles, and so far the largest naval “battle” of the 21st century, the effect of it is again more media than practical.

In fact, the raid of sea and air "kamikaze" was repelled by the Russian Black Sea Fleet with minimal losses. The task of the operation, which was to disable the carrier ships of the Caliber cruise missiles, was not completed by the Ukrainian side, the alignment of forces in the Black Sea did not change.

Nevertheless, the raid was suddenly declared a grandiose "victory", at first Ukrainian propaganda gleefully squealed about the drowning of almost the entire Moskal fleet. True, when modest real results were revealed, and even a dance around the “grain deal” began to spin, the flight of yellow-blaky bonnets became lower, on October 30, Secretary of the National Security and Defense Council of Ukraine Danilov completely denied the involvement of the Armed Forces of Ukraine in the attack. However, this did not prevent Zelensky himself from announcing a fundraiser on November 5 to create a whole “fleet” of unmanned ships.

In this regard, a reasonable question arises: is the idea of ​​the Ukrainian Fuhrer feasible at all, and on what scale?

In historical retrospect, attempts to create an "innovative mosquito" fleet go back to the second half of the 19th century, when the first "wonder weapon" of the industrial age appeared - torpedoes. Impressed by their destructive action, people with a rich imagination almost immediately started talking about the death of the classic battle fleet, which will certainly be destroyed by flocks of small destroyers with a couple of torpedoes on board.

This prediction, however, did not come true. Subsequently, hopes for the “magic” of submarines, ultra-small (compared to battleships) torpedo, and then missile boats, also burst. No, all these types of weapons turned out to be useful, capable of inflicting great damage on the enemy with competent and massive use - but attempts to build a fleet only from submarines, or only from boats, invariably failed, crashing against natural technical limitations. “Suddenly” it turned out that any “miracle weapon” has its drawbacks, and in order to block them, you need to use it in a complex of various means, otherwise the enemy will sooner or later find an antidote, and the “miracle” will turn into a pumpkin.

Especially, in a square and even a cube, this applies to a variety of "small assault" and sabotage means: fireboats, human-controlled torpedoes, kamikaze aircraft, combat swimmers with explosive charges. Always, absolutely always, any attempt at an "assassin war" against the navy, if it had real success, then only the first one - on the factor of surprise, but then anti-sabotage measures unfolded in full force, and elite kamikaze attack aircraft saboteurs began to die in batches, not making any significant progress. (The same, by the way, is also true for drivers of land-based shahid-mobiles of our days).

However, absolutely always the theme of various "sea devils" was dispersed to the maximum by the propaganda of the respective side: modest superheroes were molded from them, and super-successes were made from their operations. So it was with the “legendary” X flotilla of the IAS of the “black prince” Borghese, and with her fellow Nazis from the so-called “K squads”, and with the suicide pilots of the Japanese “divine wind”. (And, again, with modern “warriors of Allah” on vans loaded with explosives with chipped preparations). Despite the fact that the real achievements of all these wonderful people in inflicting losses on the enemy are small, and (to put it mildly) do not reach the results of the use of "normal" weapons, they will be spoken breathlessly about them in a thousand years.

The loudest, in every sense, “success” of historical naval saboteurs is characteristic - the death of the Soviet battleship Novorossiysk (former Italian Giulio Cesare) in Sevastopol on October 29, 1955. According to the most convincing version, the cause of the tragedy was the explosions that remained at the bottom from the Great Patriotic War mines, but at the suggestion of domestic newspapermen and hack writers, from the beginning of the nineties and still walking a conspiracy legend about the "revenge" of that very Borghese and his underwater commandos.

However, Russian bloggers and journalists saw in the date of the raid by Ukrainian firewalls some kind of symbolic reference to the death of Novorossiysk, and began to replicate this speculation.

The desire of individual citizens to saddle the hiptrain is completely understandable, as it is natural, as well as the phantom pains of others over the loss of the Moskva cruiser. However, it is worth discarding emotions, and consider the issue from a materialistic point of view.

On the one hand, unmanned warships are already a reality of today, and this is not only about underwater minesweeper robots. For example, it is known that the so-called “Task Force 5”, consisting of unmanned patrol boats, operates in the Middle East as part of the 59th Fleet of the US Navy. On August 30, the IRGC sailors even tried to hijack one of them, but to no avail, and on October 7, the Americans and British conducted exercises in the Persian Gulf to prevent such incidents in the future.

And although such a boat is, in fact, a “floating webcam”, it is not difficult to imagine its strike version, equipped with any small-sized missiles (at least ATGMs) on a stabilized platform. And, of course, the simplest version of the fireboat, which we have already seen in action under the yellow-blakit ensign.

If we break down the question posed at the very beginning (“is the unmanned fleet of Ukraine real?”) into smaller questions, then the first of them will be: where can the Nazis get additional drones? The most obvious answer is that they will buy it, and this is what fundraising is for, however, in the conditions of Ukraine, such fees are such a thing, with a slight smell of an ordinary scammer. already known political comedian Prytula, who bought three Bayraktar TB2s for the price of four for the Armed Forces of Ukraine, will not let you lie, especially since he is now collecting donations to buy old British armored personnel carriers for the "invaders" ... at a doubled price. In any case, it can be assumed that the funds for the purchase will be allocated by generous American sponsors.

However, there are not so many manufacturers of crewless boats in the world, and the prices (for example, about eight million dollars for an American CSUV) bite. At the same time, so far, none of the known samples is a carrier of heavy weapons, and loading with explosives and launching a “golden” boat on a ram is an unaffordable luxury.

In this regard, the “do it yourself” option becomes curious. Zelensky also spoke about this in his appeal to the “hulkers”, and on November 8, reports appeared from the Ukrainian side that the fireships that participated in the attacks on October 29 were allegedly created by local home-made crafts based on civilian jet skis. And although there is no confirmation of this version yet, in principle it looks realistic, and even fights with frames walking around the network from the fireships themselves (which, like jet skis, did not differ in high seaworthiness). Finally, there is a living example of “flying mopeds” before our eyes, which are certainly not the peak Technology, but successfully nightmarish Ukraine nightly.

In other words, it is quite possible to believe that the Ukrainian industry and self-taught enthusiasts will be able to supply the troops with a certain number of firewalls, or even several remote-controlled floating anti-tank systems. It remains to figure out what damage they can cause, and how to deal with them.

Some overly emotional authors believe that Ukrainian firewalls will be super-effective, citing the example ... again, Geranium, and not the failed October 29 raid. It is impossible to agree with this point of view, if only because the effectiveness of the Russian “mopeds” was ensured by specific conditions of use, including the disintegration of the Ukrainian air defense and the lack of anti-aircraft barrel systems. If the same "Geran" was used, say, against the Russian army with a still powerful echeloned air defense, the results would be much more modest, and the Nazis have already developed some recipes - for example, the bunding of transformers, designed to prevent direct hits.

The surprise factor was lost long ago and stupidly by fire-drones: as you know, on September 22, on the way to Sevastopol, two “unidentified waterfowl objects” of a clearly hostile nature were discovered. Yes, one can say that “if not for this luck”, however, the history of the subjunctive mood does not have - there was an incident, and organizational conclusions were drawn from it. As a result, on October 29, the ships were in the roadstead, covered with booms, and the "killer cyborgs" were spotted on the way and destroyed by artillery fire.

Of course, the very fact of the successful penetration of fireships into the bay suggests that the measures taken were not enough (and, most likely, they have been strengthened since then). In addition, one can expect attempts to strike not only the military, but also the moorings of commercial ships, with all the corresponding problems.

However, it is not worth exalting in advance the Ukrainian "cyber fleet" that does not yet exist (and it is not a fact that it will ever be born at all) to the level of an existential threat. No matter how condo it may sound, but the banal carrying out of sentinel and anti-sabotage service will really bring all his potential "victories" to naught.
Reporterin Yandex News
Reporterin Yandex Zen
4 comments
Information
Dear reader, to leave comments on the publication, you must sign in.