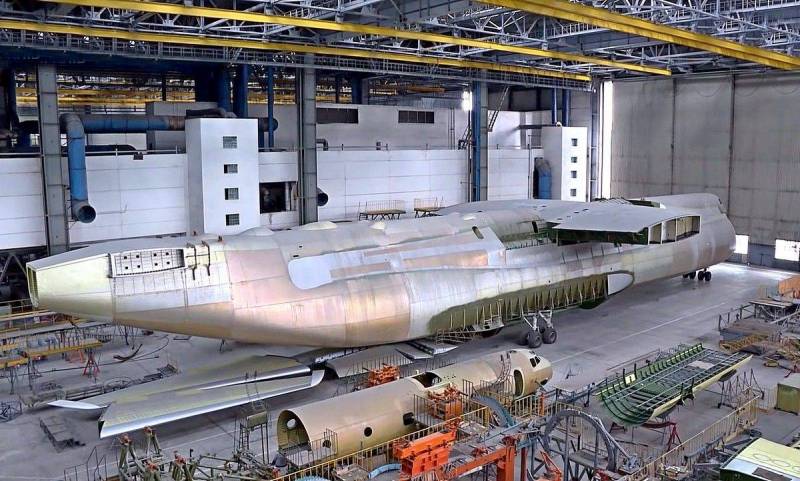 State enterprise "Antonov" was engaged in the construction of the second copy of the An-225 "Mriya" instead of the aircraft, which was destroyed in Gostomel at the end of February during the fighting. This was reported by the German publication Bild, referring to the words of the General Director of the State Enterprise Yevgeny Gavrilov.


The functionary said that work is being carried out in a "secret place" and the second "Mriya" is already 30% ready. At the same time, the cost of an ultra-heavy-lift transport jet is estimated at 500 million euros. He clarified that the second copy will be assembled, including using the surviving parts of the predecessor.

It should be noted that this information aroused great interest and at the same time surprise among the public associated with aviation and the aircraft industry. The thing is that, according to earlier statements, the fuselage and other parts of the hull of the unfinished second Mriya, which have been quietly located in a huge workshop for the past 30 years, were not damaged during the shelling. Moreover, all the past years, according to the assurances of the leaders of the Antonov State Enterprise and representatives of the government of Ukraine, the readiness of the second copy was estimated at 70% and its completion required 300-400 million dollars. Last time about it said at the end of October 2020, when Ukraine tried to convince Turkey to become an investor after China refused.

In addition, experts drew attention to the fact that, according to the statements of the head of the Ukrainian Cabinet Denys Shmyhal, almost 90% of all taxes collected in 2023 will go to the defense and security of the country. All other spending will be at the expense of "borrowings and injections." This suggests that Kyiv simply does not have the money to complete the construction of the second An-225 in the conditions of the military conflict and the raging economic crisis that have swept Ukrainian territory. Consequently, all the arguments about Mriya are either clumsy “patriotism” and self-promotion of the leader, or an attempt by Kyiv to “master” another portion of money.

But the most interesting is the comment from the Antonov State Enterprise. It turned out that the German media "made an inaccuracy", citing the words of Gavrilov. They specified that only "design work in this direction" had begun. At the same time, there are about 30% of the components that can be used for the second copy, having removed from the first. The cost of construction is estimated at "at least" 500 million euros. But it is too early to talk about a specific amount, more detailed information will be distributed after the end of the conflict. 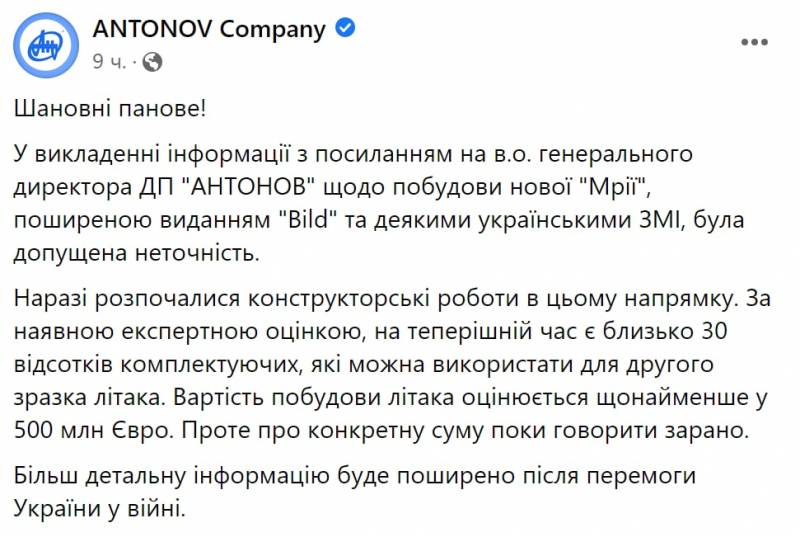 Thus, if we take into account that the second copy, according to the assurances of the Ukrainians themselves, was 70% ready, and 30% of the parts from the destroyed aircraft can be used in a new one, then this should indicate the high readiness of the next An-225. However, the Antonov State Enterprise and its management talk about hundreds of millions of investments, which suggests that they have been deceiving the public for years and continue to do so now. Therefore, we recommend that you immediately call this aircraft "Zradoperemogo".
Reporterin Yandex News
Reporterin Yandex Zen
8 comments
Information
Dear reader, to leave comments on the publication, you must sign in.