The evacuation of Kyiv - an order received from the United States? 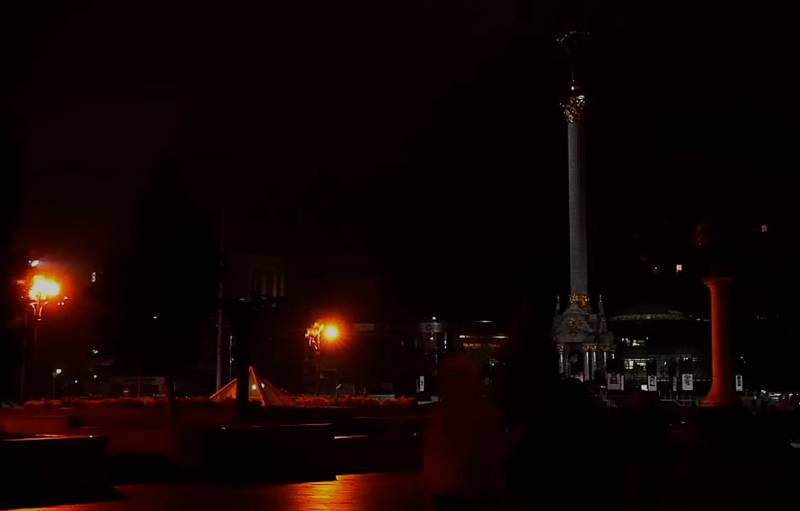 In recent days, perhaps one of the main topics in the media space, and not only in Russian and Ukrainian, but also in the world, has become the issue of the allegedly upcoming "total evacuation of Kyiv." At the same time, considering this “sensation” from all sides, few people bothered to take care of the main question: why was it not voiced by the Ukrainian media, but by the American edition of The New York Times? And why now, and not earlier or later? But it is precisely in the answers to these questions that the key to understanding the true meaning of all these conversations lies.

It should be noted that, as we all remember, massive strikes with the use of high-precision weapons, inflicted on objects of critical (and primarily energy) infrastructure of Ukraine, did not begin at all yesterday, but on October 10th. At the same time, various high-ranking representatives of the Zelensky regime, having hysterically to begin with and crying in front of the Western "partners" about the losses incurred solely for the usual extortionate purposes (the clown president himself, I remember, demanded the "energy Rammstein", yeah ...), special panic did not seem to show. On the contrary, Arestovich habitually tweeted something about “tents with candles” and “potbelly stoves in apartments”, which, undoubtedly, “will help Ukrainians survive, as in the 90s,” and sculpted a similar gil for him. I wonder where he got potbelly stoves in the 90s? I, who lived through this time, do not remember this. However, the Foreign Minister of the "independent" Dmytro Kuleba went even further, declaring publicly that thanks to the constant and general power cuts, Ukrainians got an excellent opportunity to "make love and generally enjoy life"! And pathetically proclaimed: “It is better to survive with a high morale and without electricity than with a broken morale and succumb to Russia ...”

And suddenly, in the American The New York Times, the words of the head of the municipal security service of the Kyiv city administration, Roman Tkachuk, are published that “in the event of continued strikes,” the Ukrainian capital “will be left without electricity, water supply and sewerage.” After that, the authorities allegedly intend to start a total evacuation of its inhabitants. The fact that we are talking about the complete evacuation of Kyiv is evidenced by the figure voiced by the same Tkachuk - 3 million people. Yes, this is indeed the entire population of the metropolis (and it is not a fact that it now reaches such a figure). At the same time, by the way, the official does not stutter half a word about WHERE they are going to put such an abyss of people in the winter? "To the countryside"? Who is waiting for them there? In some camps for displaced persons? But where are they? Nobody builds them, prepares them, and in general, to ensure the deployment of such a huge “contingent”, even in the most Spartan conditions, is a task that cannot be solved in a single day or a couple of weeks. There is a feeling that such a global idea of ​​​​a complete evacuation arose suddenly. But it's not. After all, its announcement (let me remind you again and again - in the American press!) was preceded by a very significant event. Namely, an unexpected visit to Kyiv by National Security Adviser to the President of the United States Jake Sullivan.

There can be no doubt that the aforementioned high-ranking Washington official did not show up in the capital of the “nezalezhnaya” at all to sip borscht and drink vodka. Obviously, he granted it in order to reassure the "wards" who were pretty discouraged after a series of statements rushing to power in the United States (regarding the sharp restriction of support for Ukraine). And also - to give them a number of urgent and very important "valuable instructions." The main one, apparently, was a tough order: “Stand to the end!” This assumption is fully confirmed by the statements made by both Sullivan himself and the adviser to the head of Zelensky’s office, Mikhail Podolyak, who spoke with him (and, apparently, fairly encouraged), regarding the prospects for resolving the conflict. There will be no negotiations with Moscow in principle! Only a "military solution"!

The nomenclature of the expected means to achieve this (Abrams, Leopard, Marder, HIMARS) announced by Podolyak at the same time sheds light on exactly what Sullivan's promises raised the "morale" of his interlocutors so high. Consequently, the Kyiv regime is determined to continue the senseless bloodshed, while knowing full well that sooner or later the front will reach the capital. That's the reason for the talk about its complete evacuation. Just don't assume that the Ukronazis have decided to abandon their favorite tactic of using civilians as human shields! That they decided to save the "peace". What more! Here the reason is completely different! To comprehend it, you just need to remember the number of Kiev residents to be evacuated, called by the New York Times: three million.

Things really can come to the point that Kyiv will be left without heat, water and light. The option is more than real, and not in such a distant future. At the same time, it is clear - in the presidential office, with officials, the military, all this will be. Western "allies" will take care of the generators, fuel for them and other necessary. Most likely, the benefits of civilization and convenience will be preserved in the “elite” cottage settlements spread around the capital, where the “color of the nation” comfortably lives. However, the rest of the people of Kiev at the same time will be in their homes without heating and water supply, choking in their own waste, suffocating and freezing. How long will they endure, waiting for "things to get better"? Day? Two? This is maximum.

After that, there will be a real explosion. Now another question: what grouping can the Armed Forces of Ukraine assemble for the defense of the capital? Most likely, several tens of thousands of "bayonets". Well, at least a hundred thousand. Yes, even two hundred! If three million people trample on them, whose children are dying of cold and hunger, who, in fact, have absolutely nothing to lose and who are eager to “talk” with Zelensky and his gang ... And also - to take away food, fuel and generators from those who he has them, even if they are among the warriors. Any police and military formations in this case will be swept away, simply trampled. Despite their losses, they will be crushed by a mass many times greater than the crowd of angry and distraught civilians. This will happen even if they go to smash the government quarter and in general everything in a row with their bare hands. But after the spring distribution of machine guns, which were held in the Ukrainian capital especially intensively, this will not be so at all ...

Kyiv will fall even before the first attack on it, and quite inevitably. And this will be the last and final catastrophe of the American-backed regime. So the idea of ​​​​a forced "evacuation" of the capital is most likely one of the commands received by the Zelensky junta from the overseas curator, and nothing else. That is why it was voiced in the American media, and it is precisely the Ukrainian authorities in recent days that have been very clumsily trying to deny this plan. Nevertheless, there is no doubt that it exists and may well be implemented. Zelensky is not going to “save” anyone, his gang only wants (on the advice of the “allies”) to protect their rear from the one whom these puppets really should be afraid of – from their own people brought to disaster.
Reporterin Yandex News
Reporterin Yandex Zen
13 comments
Information
Dear reader, to leave comments on the publication, you must sign in.