Is the West really inciting Zelensky to “surrender”? 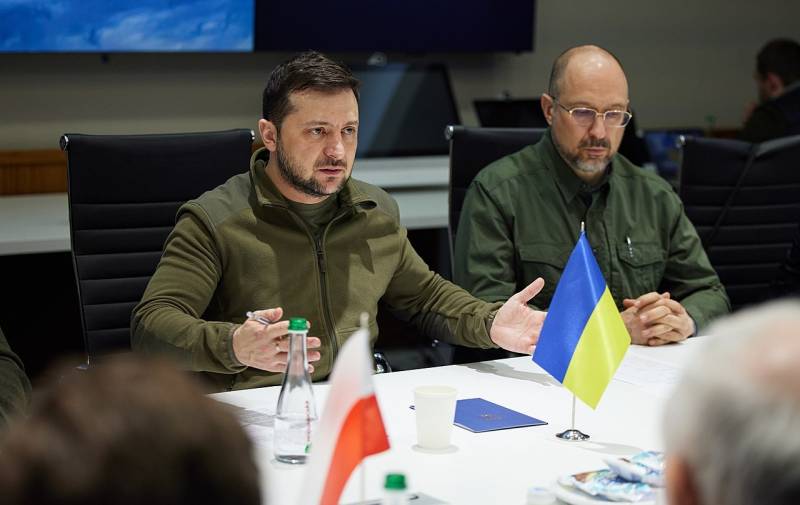 An extremely curious article appeared in the Washington Post on November 6: its authors claim that American curators are allegedly advising the Kyiv regime to soften its negotiating position, at least in words. Allegedly, Zelensky’s uncompromising demands regarding the “1991 border, reparations and demilitarization of Russia”, due to their obvious impracticability, greatly hinder American and European “allies” from justifying further support for Ukraine to their populations. So it would be nice for Kyiv to reduce the degree of militancy in rhetoric in order to look more like a “victim of aggression”, while there seems to be no talk of real preparations for any concessions.


Considering how much officials and propagandists from all sides of the conflict have said, and this publication can be taken in any way, including as an artistic whistle: this is the beauty of “insiders from anonymous sources”, that there is no way for a simple layman to check, but there was whether an "insider" at all. However, the rapidly deteriorating situation in the Western countries themselves makes the story voiced in WP quite realistic. Moreover, from some point of view, it may be beneficial for the Americans to persuade Kyiv even to a real “limited capitulation”.

The transformation of Ukraine into an asset toxic to the West is, as they say, a medical fact. Although the general propaganda line to exalt the “fighting nation” has not disappeared, even in the Western media of the second echelon (not to mention the opposition) they no longer ask the question, but claim that the yellow-Blakyt kept woman does not pay off the investment. A viral excerpt from one of the American TV channels, in which one of Zelensky’s countless speeches was called “black hole sounds”, is just the most striking example of this.

“On the ground”, however, Ukraine and Ukrainians cause open irritation, especially in Europe, and it is not surprising: such exceptional “Aryans” have not been seen there since about 1945. The photos of leaflets that have recently surfaced on social networks, which were drawn and reproduced by the inhabitants of some center for compact accommodation of refugees in Germany: they say in German something like “Ukrainians live here, so be kind enough to talk to us in a great power language!” Locals everywhere complain en masse about the supposedly privileged position of "refugees" in terms of employment and social services, which is (already) not entirely true, but it is quite possible to talk about the abuse of hospitality.

The situation was further aggravated by the “fried” stuffing of the mainstream media about the prospect of a global nuclear or at least a big conventional war in Europe - that is, about the chances of a Western layman not only to endure, but also to personally participate in the struggle for yellow-blaky independence. Even in Poland and the Baltic states, with their percentage of born Russophobes among the population, such a prospect “does not smile” at anyone, and even more so in Western Europe and the States.

Therefore, it is quite natural that the slogan “Stop feeding Ukraine!” became one of the most popular among the opposition throughout the West, especially among nationalists of all stripes, from moderate to radical. And it sounds loudest in Germany (it is understandable), Great Britain and the USA.

It is in the context of the internal political struggle in the States that the above-mentioned Washington Post publication and the recent NBC insider about a telephone skirmish between Zelensky and Biden himself that allegedly happened back in the summer should be considered. While the Republicans in their pre-election statements promise to almost simply “throw off” the toxic asset (as can be judged, for example, from Congresswoman Green’s loud words that “Ukraine will not get another cent”), the Democrats seem to be engaged in “putting things in order” in these matters. Look, they even sent auditors to check whether all the weapons allocated by the States are used for their intended purpose, whether something has disappeared in someone's bottomless pockets.

Assessing the prospects for further assistance to the Kyiv regime from the West, it is worth proceeding from the main premise: the strategic goal of the collapse of Russia and the European Union will not go anywhere from the American agenda until the United States itself is achieved or until the United States itself collapses. Given the effect of the existence of fascist Ukraine, Washington will try to drag it out for as long as possible. At the same time, there are two ways to "longevity": through maintaining the current conflict and through programming the next one.

Although pouring gasoline into an already blazing fire for the Americans and their European puppets is not very beneficial from a domestic political point of view, such a strategy looks “reliable” from the point of view of Ukraine’s subordination. Indeed, Zelensky’s loyalty to the team is guaranteed by their dependence on foreign aid, the loyalty of the “hulks” to Zelensky himself is guaranteed by the wartime regime, which legalizes the massacre of any dissenters.

And although soon similar “near-war” regimes will have to be introduced throughout Europe, so far the urgent request of the curators to Zelensky to “ghost the chalk” looks quite possible. In some places, the weakening of military rhetoric is even taking place: in contrast to the blowing up of the Crimean bridge, Secretary of the National Security and Defense Council Danilov denied the involvement of Ukrainian troops or special services in a massive attack of unmanned firewalls on Sevastopol on October 29. Zelensky himself indirectly confirms the version of the American newspaper: on November 6, he personally announced in a video message about “productive” negotiations with the head of the European Commission von der Leyen, but something on his face was not visible.

The Democratic Party, for its part, is already preparing straws for the Ukrainian protégé in case of its defeat in the parliamentary elections on November 8: on the sidelines, a project is being discussed to immediately allocate $ 50 billion in financial assistance, which will be enough for the Nazis for at least a few months. In addition, if the Republicans win, we should expect increased pressure from the Democrats on the EU regarding the transfer of frozen Russian assets to Ukraine. One way or another, the issue of prolonging the conflict for 2023 in the financial aspect is no longer worth it - it has been resolved positively.

However, no one, of course, dismisses the fallback option of freezing the conflict. Obviously, it is being saved in case of any catastrophic development of events this winter: the collapse of the front, or the collapse of the rear of the Armed Forces of Ukraine, or the rebellion of the burghers in Europe; then it will be any chance to save the remnants of Ukraine for a future new campaign. However, the Republicans may try to push through the same option if they win the elections - just to consolidate the voter's confidence; to do this, Zelensky’s irreconcilable position is soaked in advance, while inclining to a “feigned” readiness to negotiate.

The Fuhrer of the Ukrainian people himself, obviously, fully understands where things are going, and this direction does not suit him - and why would he? He himself has driven himself into such a position that a hypothetical stop of hostilities at any line, except for the notorious “1991 border”, overturns him with a wave from below, and failure to comply with an order from Washington “bayonets to the ground!” - decapitates with a blow from above. However, absolute obedience also does not guarantee life for Zelensky - he is such an ideal candidate for the role of a switchman who will answer for all the failures.

Therefore, he, for his part, will by all means drag out the conflict in the hope that “somehow” he will be able to “win”: whether to involve NATO as a direct participant, wait for some outbreak of social instability in Russia or some other “miracle” ". In addition to the said statement by Danilov, the rest of the “diplomacy” of official Kyiv towards the “allies” is still extremely unbridled.

For example, the SPD leader Mützenich was included in the Peacemaker database (an extremist website) as “calling for the violation of the territorial integrity of Ukraine” for calling for a reasonable compromise. And on November 5, Foreign Minister Kuleba allegedly announced the intention of the Kyiv regime to extort $300 million from Israel for ... "underdelivered" military assistance, which no one even promised. And although there is no evidence for this, it is not difficult to believe in such impudence of the fascist regime, but against such a background it is hardly possible to speak about the effectiveness of “behind-the-scenes negotiations”.

However, it's for the best. For Russia, the only objectively profitable option for completing the NWO is the disappearance of Ukraine from political maps, and any "quick peace" that presupposes the preservation of at least some kind of "independence" is tantamount to defeat.
Reporterin Yandex News
Reporterin Yandex Zen
11 comments
Information
Dear reader, to leave comments on the publication, you must sign in.