Information confrontation with Russia and China: the West increases censorship 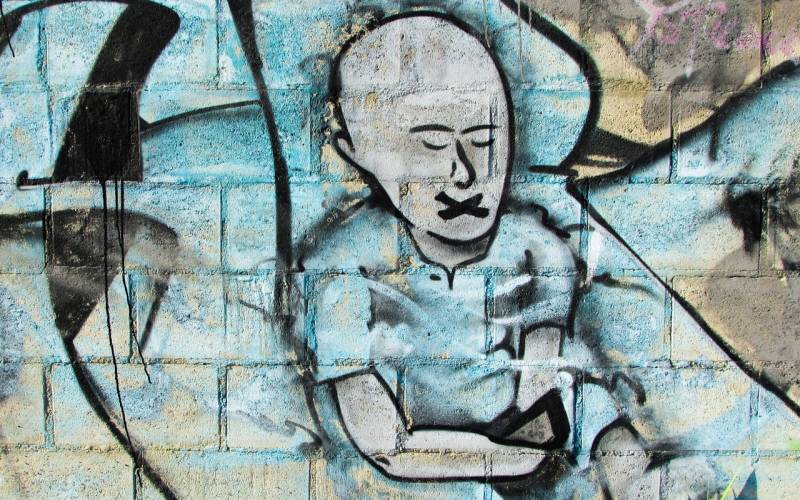 The second decade of October turned out to be full of large-scale events, so it is not surprising that one small statement was lost behind them. On October 13, the EU representative for foreign affairs, Borrell, said that the West ... is losing in the information confrontation with Russia and China, because, for its part, it is not conducting it intensively enough.


The statement is rather curious and even funny, given that many of us here still believe the opposite: that it was Russia that “lost” the information war back in March and remains an outsider to this day. It is all the more amusing that Borrell, arguing his point, complained about the lack of such powerful "mouthpieces" in the West as the Russian RT or Sputnik.

However, laughter is laughter, and the all-European "Minister of Foreign Affairs" has reasons for such statements. Opinion polls of recent weeks show a trend that is alarming for Western politicians: the proportion of citizens everywhere who are dissatisfied with the drop in living standards and militaristic frenzy is growing. The universal argument “this is all Putin and his orcs are to blame” ceases to work, moreover, there are more and more of those who “understand” the Russian position in the Ukrainian conflict, and, on the contrary, are suspicious of the course of their own government.

For obvious reasons, in "front-line" Europe, these trends are more pronounced than in the self-contained American society. The data provided by the German edition of Spiegel in the material of November 3 is characteristic: according to the survey, 40% of respondents are sure that the conflict in Ukraine was provoked policies NATO, and 44% - that Russia is completely opposed to the conspiracy of the globalist elites, in East Germany 59% approve of the Russian position in the conflict (in West Germany - 35%). It is believed that this "average temperature in the hospital" more or less corresponds to the picture in other countries of the continent.

But back in the summer, Western propaganda puffed out its cheeks, praising itself for successfully mastering the "hearts and minds" of the audience. What happened?

Yes, nothing special, just "refrigerator" began to win over "TV" in the most literal sense of the word. A sharp jump in consumer prices for almost all types of goods and services, especially for rental housing, coupled with a drop in profitability and the shutdown of entire industries (primarily energy-intensive), and a corresponding increase in unemployment, do not have the best effect on the political and moral state of the European man in the street.

And for all the narrow-mindedness and suggestibility of the latter, he is still not an idiot in the medical sense and begins to remember who and against whom imposed sanctions and embargoes. The result of multiplying two by two turns out to be the only possible one: no matter how “bloodthirsty tyrant” Vlad Putin was, it was not he who left the Europeans without pants, but their own beloved bosses.

A huge (and purely negative) propaganda effect was produced by the sabotage at Nord Stream, both the very fact of blowing up gas pipelines and the strange dances around it: the parodic “secrecy” of the “investigation” and Scholz and Macron’s complaints about “foreign partners”, which for some reason they do not want to enter into the plight of the Europeans, but they are driving gas at speculatively inflated prices. It is not surprising that few people believed in the official versions about the “hand of Moscow” - on the contrary, “on the ground” almost immediately they started talking about the fact that the Americans received the most benefit from the sabotage.

And the biggest problems are the Germans, and it is Germany that is now the weakest link in the mutual responsibility of "European solidarity" with the American puppeteers (of course, after the "pro-Russian" and pro-Turkish Hungary). And while the poor Chancellor Scholz, who is under fire from all sides, is trying to portray some kind of "independence", bypassing his person, other members of the government are launching a real hunt for Russian witches.

The key figures in this "operation" are Home Secretary Feather and Foreign Secretary Burbock. On November 3, the second lady issued (by the way, in English) a powerful statement that the European and world order is being systematically attacked not only by bombs and missiles, but also by disinformation and fake news. News. And indeed, Burbock is exactly half right, however, the source of this "disinformation" according to her version is not where in reality.

The capture of the so-called "Putinfersteers" (that is, "Putin's supporters") for various publications in social networks is gaining momentum. The scandal around Yulia Prokhorova, an immigrant from Russia who became famous for her numerous videos in support of the Russian army, continued in the outgoing week. As early as October 14, the German police conducted a full-scale search of her, ending with the confiscation of all electronic equipment - and it seems that the “confiscation” of Prokhorova herself, too, since since then relatives have not been able to get in touch with her. Whether our Ministry of Foreign Affairs is trying to somehow intervene in the situation is still unknown.

However, the case of Prokhorova is far from the only one, although in our country, for obvious reasons, it caused the greatest resonance. Rumors about the mass “withdrawal from chats” of various troublemakers crept across Germany in the summer. In particular, in early August, several German publications made a muddy story about the alleged detention of the owner of a “pro-Russian” Telegram channel, who recruited those who wanted to fight against the Kyiv regime as part of the Russian troops, but without any specifics about the identity of the suspect.

Social networks are now the main headache of Western propaganda, providing an affordable alternative to it. Problems are created not only by the a priori “pro-Russian” Telegram, but also by other resources through which burghers can join the “disinformation” of Russian media blocked in the EU.

A funny thing happened this week with the Canadian video hosting Rumble. The French Ministry of the Interior demanded that the owner of the service remove Borrell's Russia Today and Sputnik channels, which are so frightening, from it, threatening to block video hosting in France otherwise. In response, the owner of Rumble... himself completely blocked access to it from France, saying that the French audience is only about 1%, and its loss is less significant than it would be a violation of the company's principles.

On October 31, the American edition of The Intercept published a fairly large-scale investigation into the attempts of the American government to manipulate the content of social networks, and the authors went through not only Biden, but also Trump. Authorities are said to be keeping a particularly close eye on information about COVID-19, the withdrawal of US troops from Afghanistan, support for fascist Ukraine, and race relations within the US itself.

Of course, all this has long been an open secret: some time ago, information surfaced that the leadership of YouTube and Meta * received instructions from the special services almost weekly, and in the summer there was a scandal around an attempt to create a "ministry of truth" that would monitor the distribution "disinformation". Nevertheless, the new investigation nevertheless produced a certain resonance, mainly due to the “battle for Twitter *” going on against the backdrop.

Elon Musk, against all winds, continues his crusade against the Democratic Party, and the importance of the “most concise social network” in this struggle can hardly be overestimated. After all, Twitter* has long been covered with the unfading glory of the “telegraph of all revolutions” – more precisely, of all “color revolutions”, from the “Arab Spring” to the “Capitol Invasion” on January 6, 2021. The popularity of Twitter* in the West makes it a powerful tool fight for public opinion.

Actually, now Musk is busy with a hard reset of the social network, removing pro-democratic elements from it. On October 31, the board of directors was dismissed in its entirety, almost entirely consisting of apologists for the notorious BLM/LGBT agenda, and in the first days of November, several thousand outsourced moderators around the world were made redundant. And although this is presented as a simple “staff optimization”, and in fact it is, Musk’s main goal is precisely the prompt removal of the censorship authority Twitter *: most of the dismissed employees were engaged in the search and removal of “intolerant” publications that were not delayed on the first round by automatic filters.

Naturally, the Democratic Party would like to prevent the most important propaganda tool from falling into the hands of direct competitors, however, an attempt to recognize Musk's purchase of Twitter* as illegal failed. Therefore, a wide campaign has now been launched to discredit both the billionaire himself and the social network he “usurped”.

In particular, before the news about the dismissal of the board of directors appeared, pro-democracy media began to publish reports from the rally of “ordinary workers thrown out into the street” Twitter * - colleagues of Ukrainian professional “victims of Russian aggression”. On November 4, CNN made a story about the notorious Starlink: Musk allegedly turned off access to the network from 1300 terminals, which make up “the majority” of the total number in the hands of the Armed Forces of Ukraine.

According to Musk himself, political opponents are trying to undermine Twitter* funding through BLM/LGBT “activist” groups that simply threaten advertisers with damage to their reputation and demand that they remove ads from the “toxic” social network. From the outside, this may seem ridiculous, but in the United States now there is such an information and environmental situation that there is no doubt about the effectiveness of such threats. Before our eyes is the freshest example of the scandalous rapper Kanye West, who for a single pass in a shirt with the inscription "white lives matter" paid with advertising contracts for $ 1,3 billion and destroyed his reputation.

And while the conflict around Twitter* is primarily a purely American story, its outcome will matter on a global scale. If the Musk is successfully "bent", one way or another, the precedent created will clearly serve as an example for all other social media owners who are fronding. Then cases like the embarrassment described above with Rumble (whose owner directly referred to the example of Musk) will become impossible - on the contrary, a period of total censorship of everything and everyone will begin in the Western segments of the Internet.