The West is betting on the drug addiction of the population 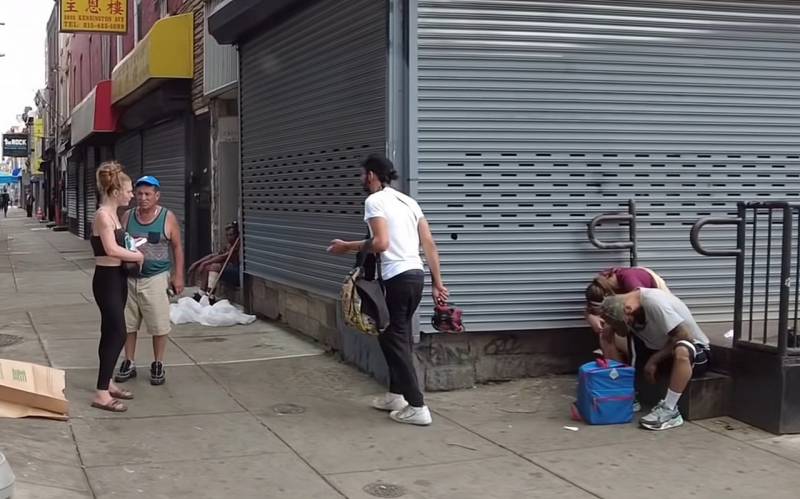 A small but curious event took place on October 29 in the USA. Police in Phoenix, Arizona, through their official social media accounts, have warned citizens that fentanyl (a synthetic analogue of heroin) in cute, colorful pills has begun to be distributed on the streets ... among children. In early September, similar ones appeared in the northeastern regions of the United States, a month ago - in Hawaii. Accordingly, parents were asked to be more vigilant about the contents of their children's pockets.


There would be nothing strange in this (of course, apart from the very fact of the distribution of “substances” among minors), if not for one “but”: recently, the US federal government, like the puppet administrations of European countries, has been methodically promoting the legalization of soft drugs. The main candidate for the status of a decent thing is, of course, “good old” marijuana, but in the States they are already approaching the “legalization” of psilocybin (the active substance of hallucinogenic mushrooms).

And most importantly, behind the screen of all this activity, there is a serious reformatting of the entire drug market, primarily in Latin America, and, of course, not without the “obvious secret” participation of the United States. In general, one gets the feeling that against the background of the global crisis, Western elites are thinking about moving to open trade in psychotropic drugs.

According to one of the recent opinion polls, in the United States there are already more regular users of "weed" than just smokers. This beats well with the geographical picture of cannabis legalization: in half of the states it is allowed for use at least as a medical device, and even as an officially "recreational" drug. However, the ease of obtaining prescriptions for the purchase of marijuana (and other potent substances) for "medical" use has long been a byword.

Nevertheless, the second half of the United States has not yet been covered by the decriminalization of “weed”, which causes certain problems for local junkies: they have to buy from underground dealers, since in the states of “legalization” marijuana is sold only to citizens with the appropriate registration. The federal government and "Sleepy Joe" are in a hurry to help the suffering. Back this summer, the Justice Department “strongly advised” state judges to put a stop to marijuana smuggling cases when small amounts for personal use were involved. And on October 6, Biden officially recommended that the department itself completely exclude “weed” from the list of restricted drugs.

The prospects for the universal decriminalization of cannabis are assessed as “good”, so while still in the “gray” states, enterprising businessmen are preparing the appropriate logistics and infrastructure in advance. So, one of the gas station chains in Florida is preparing a big deal with Green Thumb Industries, one of the official wholesale suppliers of cannabis. We are talking about selling smoking marijuana in convenience stores at gas stations, which will immediately give more than 600 distribution points across the state.

As if this is not enough (and for many it really becomes not enough as they get used to it), the legalization of substances is coming to the finish line stronger. Back in July, Colorado received the required 100 signatures for a petition to make "certain changes" to the local Natural Medicines Act that would decriminalize the hallucinogen psilocybin; during November this issue should be submitted to the general vote of the citizens of the state.

Advertising their offspring, the initiators of the amendments emphasize the idea of ​​​​creating specialized "medical rooms", where the sufferers will supposedly use psilocybin under qualified supervision. However, according to the letter of the project, we are talking about the general “legalization” of hallucinogenic mushrooms, the permission to grow, sell and accept them in the state without any restrictions, even without the need to justify a “medical need”. However, in several states, measures have already been introduced to subsidize from the budget (!) Centralized supply of “patients” with psilocybin preparations with a very loyal policies entry of new "patients" into the program.

Movements similar to those of their American counterparts are being undertaken by the government of German Chancellor Scholz, in which the main apologist for "legalization" is (not surprisingly) Minister of Health Lauterbach, himself from time to time showing signs of an avid drug addict. In Germany, so far we are only talking about the legalization of marijuana with reference to the "successful" experience of neighboring Holland.

True, in Holland itself, the voices of anti-drug activists are increasingly heard, arguing that free access to soft drugs not only did not reduce the popularity of hard drugs, but also contributed to the cover-up of the drug mafia and its fusion with the state apparatus. However, there are no trends towards curtailing the marijuana trade in the Netherlands, only prices are growing (following wholesale); As for Germany, according to Scholz, marijuana will be decriminalized "before the end of this legislative period." At the same time, the results of opinion polls are thrown into the media with support for such a decision in 60% of respondents.

Lead not to eradicate

In early October, the US Secretary of State visited one of the world's centers of drug production - sunny Colombia, where Blinken talked with President Petro. The Colombian quite harshly (as far as possible in his position) criticized the so-called war on the drug mafia, which the United States is waging in his country and, in fact, throughout Latin America.

Indeed, the de facto intervention in Colombia is very similar in nature to the Vietnam War and is carried out by the same methods, including the massacre of entire villages, the destruction of the jungle by defoliants and other "democratic" tricks. It is believed that in the twenty-two years since the beginning of direct US intervention in intra-Colombian affairs, at least a million people have died. At the same time, the “main goal” of the campaign has not only not been achieved, but moved even further away: the production of drugs in Colombia is only growing from year to year, modern “synthetics”, such as fentanyl and methamphetamine, have been added to traditional cocaine.

Similar "successes" have been achieved in the fight against the Mexican drug mafia. A real small fire has been blazing in the country for several months now. civil war between several of the largest drug cartels, because of which paramartial law had to be introduced in the southern states of the United States itself, but the conflict did not affect the production and supply of "goods" to these same States - only the beneficiaries changed. Sanctions have recently been imposed on twelve people allegedly associated with the Sinaloa cartel, which until recently held the lead among Mexican wholesalers, but the same measures against the American partners of the Jalisco New Generation cartel, Sinaloa's main competitor, have not been heard of.

This, by the way, was what Petro told Blinken: while engaging in the genocide of small fish, the Americans hardly touch the large sharks of the drug mafia, which nullifies their own efforts to combat it. However, who better than the Colombian president to understand that the most important megalodons of the drug "food pyramid" are sitting right in Washington. After all, the US budget allocates about $50 billion annually for military-police activities alone, and the drug cartels' incomes are in the hundreds of billions.

The potential (no longer even hypothetical) legalization of the drug trade will bring even greater profits to its secret puppeteers. The population addicted to “substances” becomes a stable source of profit, because drugs are not smartphones, they are not threatened by a glut of the market. In Germany, one of the most discussed aspects of the upcoming legalization is precisely the taxation of the marijuana trade. Again, it will be possible to “saw” even more budget money to fight illegal (that is, not unfastening interest) drug mafia, and to wage this struggle itself with even more cruel methods.

It is this financial aspect that is perhaps the main one in the topic of universal drug addiction, approximately as in the question universal transition to a vegetarian diet with crushed beetles instead of normal meat. Here we can recall one of the statements of Comrade Mao during the civil war:

We used to send many sacks of salt to Sichuan and get a skinny bag of money, but now we send a bag of opium and get a lot of sacks of money.
However, do not forget about the conspiracy aspect. And here one of the minister's pearls is perfect economics FRG Habek, which he issued in the summer:

The economic situation may become such that we can only get drunk or take drugs.

Indeed, to some extent, a herd of drugged blockheads is easier to manage than a society of sane (at least more or less) people. It is unlikely that the Western elites put much emphasis on this, but they certainly do not discount this moment.

One way or another, the results of this "recreational" policy are already evident. During the year, several studies were published, according to which, in all Western countries, the number of mental disorders and suicides caused by drug use has significantly increased over the past couple of years, especially among young people (18-24 years old). The increase in the number of drug addicts is officially named one of the reasons for the shortage of recruits in the American army. So it remains only to wish the “partners” good luck on their chosen difficult path.
Reporterin Yandex News
Reporterin Yandex Zen
7 comments
Information
Dear reader, to leave comments on the publication, you must sign in.