Flying will be worse: TOP 5 airliners of the future 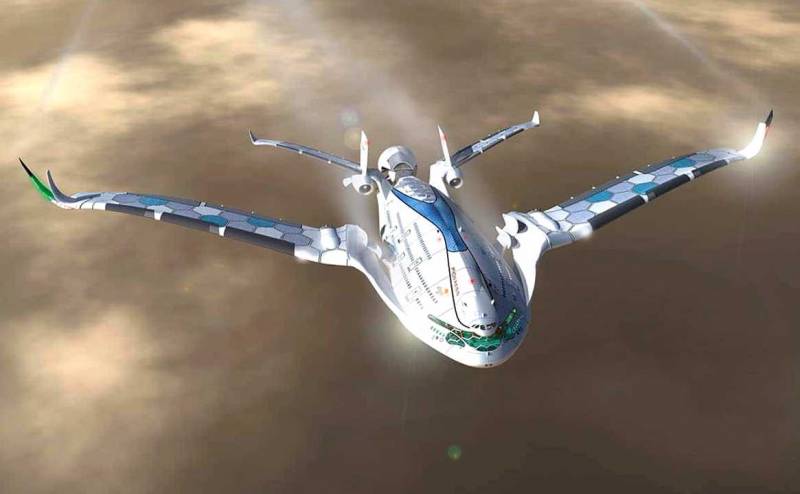 
The near future of passenger aircraft can be easily estimated if you look at the current model range of two leading world aircraft manufacturers - American Boeing and European Airbus. This applies, inter alia, to domestic transportation. “Today we have almost 80% of the market - these are Airbus and Boeing,” said Dmitry Rogozin in 2017. The incorruptibles and face of the Boeing 737 and Airbus A320 have transformed into the highly economical Boeing 737 MAX and Airbus A320neo, which can fly for decades. Well, the latest and revolutionary in many respects, the Boeing 787 Dreamliner can be used for at least half a century: the life cycle of aircraft is steadily increasing.

This, however, does not mean at all that the designers of passenger aircraft have run into a dead end. At a minimum, their economy will continue to increase, and in addition, attempts will continue to create a completely “green”, non-environmentally friendly aircraft. Moreover, it should be in demand in the market, that is - cheap. Another direction is the creation of new supersonic airliners, which, in comparison with the Tu-144 and the Concord, will be low noise. Recall that an object moving in the atmosphere at supersonic speed generates a shock wave, which affects the senses of living things. That is, supersonic airliners clearly did not make life on earth more comfortable. This problem is now being solved by the Americans, who intend to create a demonstrator. of technologies quiet supersonic aircraft of the future. So far we are talking only about a single winged car of small sizes. But for now. Moreover, technical limitations are not an obstacle for artists and engineers from different countries, offering their vision of passenger aircraft of the distant future as concepts. We’ll talk about them now. 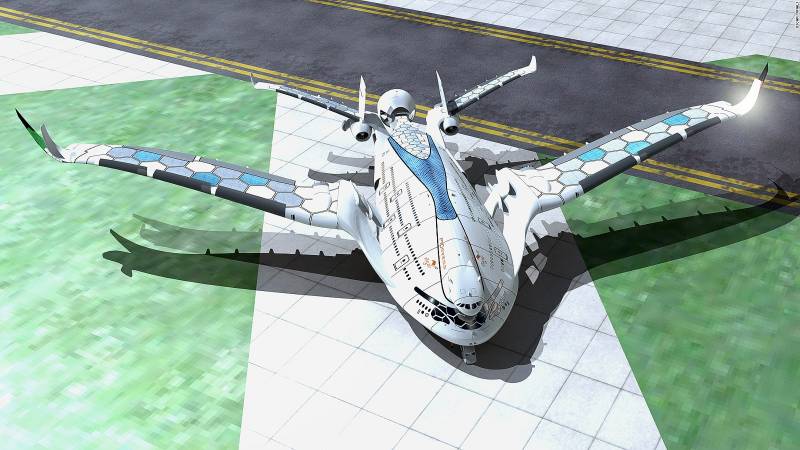 The Spanish artist Oscar Vinals cannot be denied a lack of imagination. In 2015, he showed the world his idea, which he himself called AWWA-QG Progress Eagle. We are talking about a giant "flattened" airliner, on board which can accommodate up to 800 passengers. The central idea of ​​the concept, as you might guess, has become environmentally friendly. The energy necessary for the operation of the engines, Vinals proposes to generate due to solar panels installed on the roof and wings of the aircraft. Purely conceptually, the airliner is seen as a sort of successor to the Airbus A380. The artist hopes that the winged car can be seen live by about 2030. In fact, this is unlikely: in front of us is just a bold flight of imagination (however, not without common sense). Leading aircraft manufacturers may have very different perspectives on the future of civil aviation. Therefore, we can rank Progress Eagle only on the fifth line of the rating.

Airbus loves to patent various insane at first glance ideas. Most often, they are also nothing more than concepts that are unlikely to be ever realized: a patent is a safety net against the machinations of “insidious” competitors. Airbus filed one of the most unusual patents in 2013. It is a plane that is split after landing. The airliner will consist of two parts: one will include a cockpit, wings, engines and a tail section. The second will be a removable module, where passengers and cargo will be located. A special crane will install it on the plane. The airfield of the future, according to Airbus experts, may also undergo changes: it will become round, which will ensure the fastest installation of modules. In general, despite the complexity of the idea, according to its authors, the modular design will make landing / disembarking faster. But now the concept looks unnecessarily technologically complex. 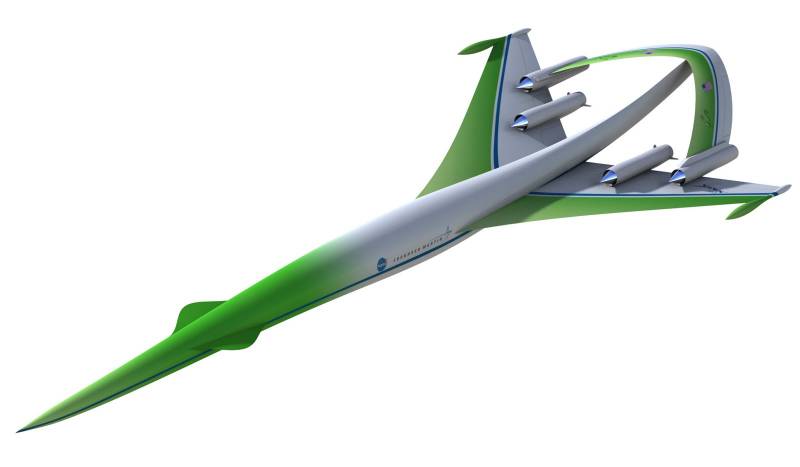 Supersonic Green Machine is far from the newest concept. The American company Lockheed Martin introduced it back in 2010. The “green” plane was nicknamed because of its power plant. New types of aviation fuel are called upon to help protect nature: methane or hydrogen. It is assumed that at low speeds Supersonic Green Machine engines will operate as conventional turbojet engines, while at high speeds they will transform into ramjet engines. The original rear wing, according to the idea, will reduce sonic boom when flying at supersonic speed. The image of the aircraft even now proudly flaunts on the NASA official website, but do not forget that we just have a general plan of work for the future. A “green” airplane is unlikely to ever appear in exactly the video in which it was presented.

In 2015, it became known that Airbus was able to obtain a patent for a hypersonic aircraft capable of flying at a speed of 4,5 times the speed of sound. Purely visually, the ship does not look like any existing or promising aircraft, not to mention specifically passenger airliners. In addition to speed, one of its distinguishing features should be a low noise level. The aircraft will receive all these qualities thanks to the unique layout, which involves the use of three different types of engines at once. Turbojet engines installed in the lower part of the fuselage will extend, depending on the flight mode. The most interesting thing is that in the rear of the fuselage the ideological inspirers of the concept decided to place a rocket engine: it will be used for sharp, almost vertical climb. In other words, after takeoff, the aircraft will hide the turbojet engines and “stand on its hind legs”, turning into a kind of “Space Shuttle” from the world of civil aviation. This, among other things, will minimize sonic boom when flying at supersonic speeds. 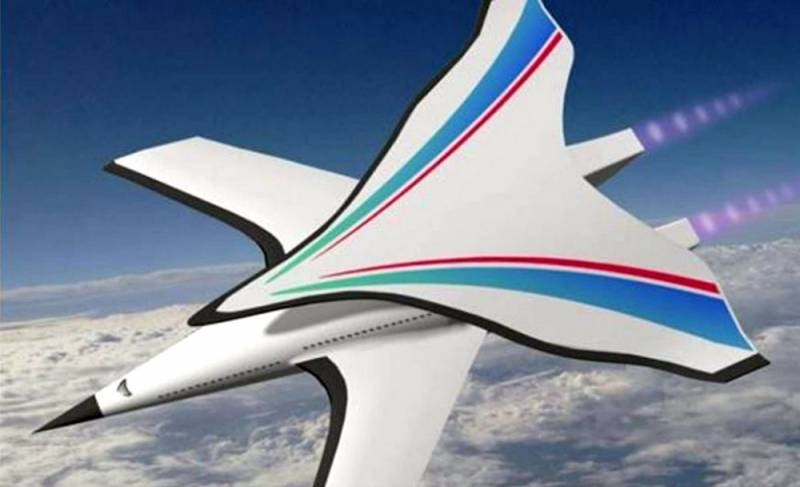 The first place in our rating is deservedly given to the Chinese engineers who worked under the direction of Tsui Kai. They suggested creating a hypersonic whatnot. As you know, a biplane is an airplane that has two bearing surfaces (wings): one is located above the other. Due to this design, you can get a large wing area and lift with a small wing span. Such aircraft were actively used in the First World War. Now the Chinese have proposed to equip the airliner with a large lower wing and a small upper one. According to the idea, during a hypersonic flight, shock waves will form on the lower wing: the upper wing will rely on the shock wave, due to which a large lifting force will appear on it. All this will allow the aircraft to consume less fuel and be economical. But this, of course, is in theory. The described concept is very far from practical implementation. It is known that at the beginning of 2018, the Chinese built and tested a model with a length of 500 mm. Further plans of the engineers of the Middle Kingdom are unknown.
Ctrl Enter
Noticed oshЫbku Highlight text and press. Ctrl + Enter
We are
Will Russia's new project be able to challenge Boeing and Airbus
MS-21 airliner: there are risks, there is no plane
Reporterin Yandex News
Read Reporterin Google News
Ad
We are open to cooperation with authors in the news and analytical departments. A prerequisite is the ability to quickly analyze the text and check the facts, to write concisely and interestingly on political and economic topics. We offer flexible working hours and regular payments. Please send your responses with examples of work to [email protected]
1 comment
Information
Dear reader, to leave comments on the publication, you must sign in.