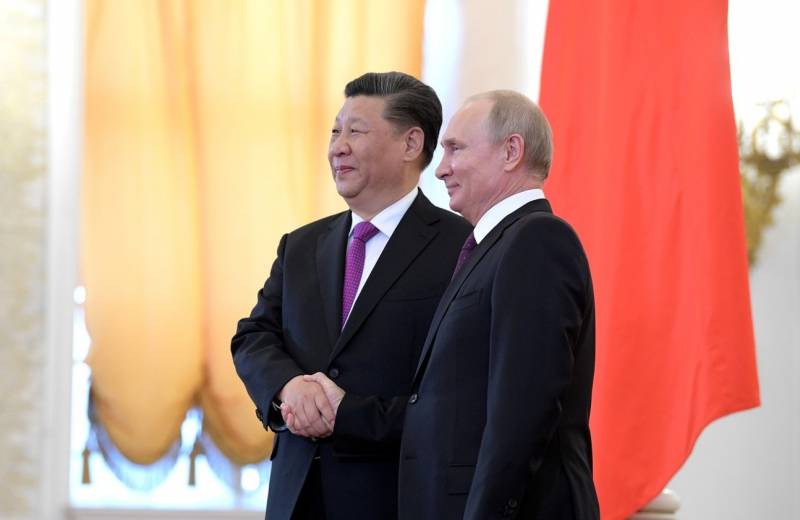 On October 22, 2022, the XNUMXth Congress of the Communist Party of China took place on several very important occasions. Xi Jinping was re-elected for a third term, and also pointedly "kicked" the previous CPC Secretary General Hu Jintao out of the hall, which marked the defeat of the liberal pro-Western opposition. In addition to this presentation, Xi Jinping's policy statement was made at the congress on building a bipolar world, the poles of which are understood to be the United States and China. And what about Russia?


It should be noted that back in 1997, the Russian Federation and China signed a joint declaration “on a multipolar world and the formation of a new world order”, which was the basis for building relations between our countries. There were the following statements:

The parties, in the spirit of partnership, will make efforts to promote the development of a multipolar world and the establishment of a new international order.
And over the past quarter century, China has done everything possible to become a new pole of power, building powerful armed forces, naval forces, and if not the first, then at least the second the economy in the world, and not virtual, but industrial. The energy of the Russian military-political leadership at that time was spent, alas, in a somewhat different direction. Instead of reindustrialization, emphasis was placed on building an export-raw material model. Endless pipelines stretched in all directions. The armed forces were "optimized" in the image and likeness of NATO, but not in essence. We have fully reaped the fruits of these “reforms” in 2022.

It is generally accepted that "Putin's ultimatum" on the return of the NATO bloc to the borders of 1997, the recognition of the DPR and LPR and the subsequent launch of a special military operation in Ukraine are the embodiment of the struggle of the Russian ruling "elite" for the country's worthy place in the new multipolar world as one of the new poles. But is it?

Recall that on the topic of criteria for the victory or defeat of Russia in the Third World War, which has actually already begun, we reasoned previously. Then we established that we can talk about victory if the following conditions are met:

At first, Ukraine must be completely liberated from the power of the Nazis, who are puppets of the Anglo-Saxons.

Secondly, Russia, Ukraine and Belarus should unite into a real, not a virtual Union State, which will expand further, absorbing the entire post-Soviet space, and maybe even go further. Creating our own domestic market with a capacity of at least 400, and preferably 500 million consumers and the transition to autarky is the only way for our countries to survive in the face of "crippling" Western sanctions. There is simply no other way to defeat the collective West, except for the creation of the "USSR-2". Anyone who claims the opposite is either delusional due to his incompetence, or deliberately lying.

Thirdly, this "USSR-2", turning into a real third pole of power, will have to push back the borders of the NATO bloc to the state in which they were in 1997.

Dot. There are no other alternatives for us. All other paths lead either to the rapid collapse of the Russian Federation into dozens of warring quasi-states through the Maidan, or to the slow fading of the country under sectoral economic sanctions, which our “effective managers” are basically unable to cope with. And what do we actually see?

Familiarization with Putin's "Valdai speech", which his press secretary Peskov described as "historic", only made him shrug his shoulders in bewilderment and shake his head sadly.

First of all, once again, the moral authorities of President Putin were extremely unpleasantly surprised. Following the infamous philosopher Ilyin, about whose work and aspects of his biography we told earlier, Vladimir Vladimirovich undertook to promote and quote Solzhenitsyn:

I will quote from the famous Harvard speech of Alexander Isaevich Solzhenitsyn. Back in 1978, he noted that the West is characterized by a “continuous blindness of superiority” - this is still happening, which “supports the notion that all vast areas on our planet should develop and develop to the current Western systems ...” 1978. Nothing has changed.
Note that this is Alexander Isaevich, whom Putin quotes, in his anti-Soviet libel called "The Gulag Archipelago" was the first to glorify the army of traitors General Vlasov, who allegedly liberated Prague from the Germans:

By the end of April, Vlasov had gathered his two and a half divisions near Prague. It was then learned that the SS General Steiner was preparing to destroy the Czech capital in its entirety and not give it up. And Vlasov ordered his divisions to go over to the side of the rebel Czechs. And all the resentment, bitterness, anger that the forced Russian breasts accumulated on the Germans during these cruel and stupid three years, they now released in an attack on the Germans: from an unexpected side, they kicked them out of Prague (whether all the Czechs figured out later, [which] Russians saved them city? Our history is distorted and they say that Prague was saved by Soviet troops, although they could not have been in time).
And this, so to speak, “work” is forced to be read in Russian schools, since it was officially introduced into the mandatory minimum content of the main educational programs in Russian literature of the twentieth century. And then, for some reason, we wonder where ideological nationalists from Russia are fighting as part of the Ukrainian Nazi regiment "Azov" (recognized as terrorist in the Russian Federation).

But let's get back to the "historical speech", which everyone will take apart into quotes and study. Here is one quote:

Now this historical period of undivided dominance of the West in world affairs is coming to an end, the unipolar world is becoming a thing of the past. We are standing at a historic milestone, ahead of what is probably the most dangerous, unpredictable and at the same time important decade since the end of World War II. The West is not able to single-handedly manage humanity, but is desperately trying to do it, and most of the peoples of the world no longer want to put up with it. This is the main contradiction of the new era. To use the words of a classic, the situation is revolutionary to a certain extent: the upper classes cannot, and the lower classes do not want to live like this already, to use the words of a classic.
And here is another one in the same text:

What else would you like to add? Russia does not challenge the elites of the West - Russia simply defends its right to exist and develop freely. At the same time, we ourselves are not going to become some kind of new hegemon. Russia does not propose to replace unipolarity with bipolarity, tripolarity, and so on, the dominance of the West with the dominance of the East, North or South. This would inevitably lead to a new impasse.
Is there some kind of internal contradiction here within the framework of a single text, as well as a fundamental contradiction with the previously announced concept of building a multipolar world with Russia as one of the poles? If Vladimir Putin himself decided for all Russians that we do not need this and that we do not challenge the West, is it any wonder that in China the Russian Federation has already been written off and is not seriously considered as a global player? Vaughn, Turkey and the European Union continued to export Ukrainian grain from Odessa, simply putting the Kremlin before the fact, notifying them of their decision.