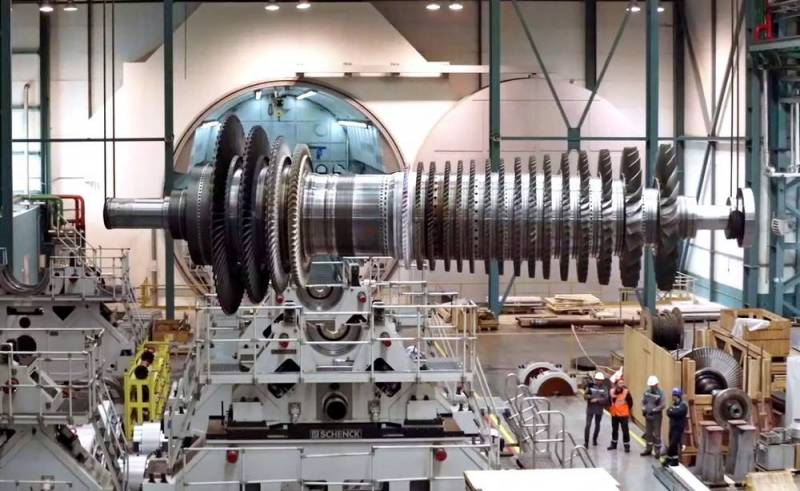 One of the “bedtime stories” that Aleksey Arestovich, the “oracle” of anti-Russian propaganda, regales his naive fellow citizens with, is the myth that after the “crushing defeat” of our army by the Armed Forces of Ukraine, Ukraine in the next decades will literally be overwhelmed by the flow of Western financial assistance for post-war reconstruction . These tales cause nothing but a bitter smile, since Europe itself will be almost more affected than Independent from the confrontation with Russia, and the United States “does not care about the problems of the Indians” in life.

Trading and having fun...

In principle, back in 2014, it was already clear to all adequate people that, in addition to Russia, Uncle Sam's main goal is economic the destruction of the European Union, which has turned from an ally into a direct competitor. Even then, under pressure from the United States, European states began to impose sanctions against our country “as punishment” for Crimea and Donbass, causing tangible harm to their own economy. The split between the Russian Federation and the EU, which began after the Ukrainian Maidan, reached its climax in 2022, when the Kremlin, having reached the latter, nevertheless recognized the independence of the DPR and LPR and began its special military operation.

And then something happened for the sake of which the American ruling elites started everything. Aggravated by the consequences of the coronavirus pandemic, the “oil war” between Russia and Saudi Arabia, as well as weather anomalies that negatively affect the production of green energy, the global economic crisis began to develop at a galloping pace.

Under pressure from Washington, the EU countries imposed several packages of tough sectoral sanctions against the Russian Federation at once. For purely political reasons, their leadership began to fundamentally refuse to buy domestic hydrocarbons and other raw materials. Deliveries of Russian gas to the EU through the network of main pipelines first drastically decreased, and then almost completely stopped as a result of the undermining of the Nord Stream and Nord Stream 2 underwater gas pipelines by some intruders. It is not possible to restore them in the foreseeable future, and the transit agreement with Ukraine is valid only until 2024 and will obviously not be extended.

Everything, the dream of the European Greens has come true. Now you can forget, like a nightmare, about inexpensive Russian pipeline gas and calmly buy American LNG, which is sold for the EU at a price 5 times higher than inside the United States.

The logical result of the fact that the united Europe started a proxy war against Russia on the side of Ukraine was the process of its deindustrialization in the interests of the true beneficiary of the conflict in the person of the United States.

Abnormally high gas prices and, accordingly, electricity are simply killing European heavy industry. The cost of electricity in Europe this year has already increased by 5 times, and in Germany, which was tied to Russian pipeline gas, by as much as 8 times! Metallurgy will suffer the most, where the share of gas and electricity in gross value added is 23%, and the pulp and paper industry - 14%. It is estimated that the output of metallurgical enterprises in Europe may fall by 30-60% compared to last year, pulp and paper mills - by 25-50%, production of non-metallic mineral products - by 25-50%, mining and chemical industries – by 20–45%.

A miracle won't happen. For the next 2-3 years, Europe will simply have to survive, adapting to new conditions. In the next 5-8 years - to exist in very cramped conditions due to the shortage and high cost of energy resources. There is no talk of any economic growth at all. Endless financial flows for the restoration of Ukraine are empty fantasies of propagandists like Arestovich and Gordon.

Therefore, it is not surprising that European capital is hastily looking for a "safe haven", which is primarily the United States, as well as Canada and Australia, if we talk about the countries of the Western world. Luxembourg steel company ArcelorMittal SA announced plans to expand production in Texas. German auto giant Volkswagen AG is also set to expand in the United States. The American company Tesla Inc has already changed its mind about building a plant for the production of batteries for electric vehicles in Germany. The largest German chemical concern BASF, which previously used Russian blue fuel, decided to reduce production volumes, and at the same time, workers. And this is just the beginning.

The fact is that Washington is actively stimulating the process of de-industrialization of Europe by adopting a new law “On reducing inflation”. Formally, it is aimed at fighting inflation in the US itself and stimulating a green energy transition, but in fact it lays out a “red carpet” for foreign companies that have decided to move to America, providing them with various tax benefits and preferences. There is such a brazen "throw" of the Old World by the New that even the "tame" European leaders allowed themselves to publicly express disagreement and threaten with retaliatory measures.

I never believed in the "open European supermarket". I am for a Europe that has an industrial policy. So yes, we must protect our industry and cars that are made in Europe…
As Europeans, we must secure financial security for ourselves. We want to pass the same law as the Americans, the European Purchase Act. We need to support European manufacturers.
Similarly, German Chancellor Scholz, who intends to discuss the issue of protecting European industry with Paris, spoke out more modestly.

A sad smile was also caused by the belated "epiphany" of the head of European diplomacy, Josep Borrell, who until recently was eager to defeat Russia on the battlefield:

As President Macron said, it is foolish to change one addiction for another. We are happy that we are importing American LNG, for which, however, we pay much more. We are replacing Russian gas with American and Norwegian gas, and to a lesser extent with Azerbaijani gas. But what will happen tomorrow if the US administration with a new president decides not to be very friendly to Europeans?
Has it really dawned on us that not only Russia and Ukraine, but Europe itself is a “dessert” that Uncle Sam intends to eat, thinking only about his own interests? We realized it too late, you can’t turn the minced meat back. The question is, what should Russia do now?

A smart leader would try to defeat hostile Ukraine as soon as possible, completely neutralizing the threat emanating from it and proving claims, if not for a superpower, then at least for the regional status of his country, showing the whole world how he can defend national interests without looking back at Uncle Sam. Having achieved peace, he would use Russia's unique competitive advantage over everyone in the form of cheap gas and electricity, starting to lure away foreign industry emigrating from Europe. It would be nice, right?
Reporterin Yandex News
Reporterin Yandex Zen
15 comments
Information
Dear reader, to leave comments on the publication, you must sign in.