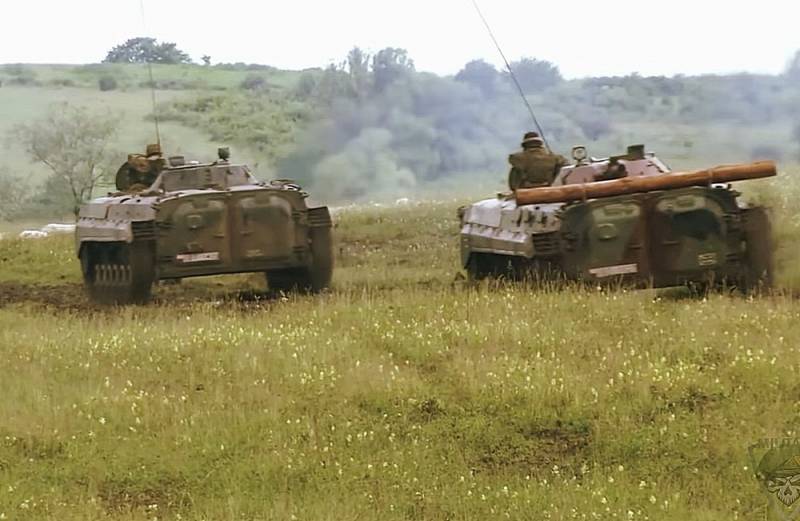 The fact that Poland could become the next "torpedo" against Russia has been said for a long time and often. And now, against the backdrop of the accelerating degradation of fascist Ukraine (we are talking about the loss of the ability to continue hostilities, everything else there has already degraded to the last limit), it seems that the Polish “shell” has begun to be prepared for battle: refuel and fasten the warhead.


In recent weeks, many of the officials of the Polish government have managed to make serious statements. So, on September 9, Deputy Defense Minister Otsep said that his department considers a direct military conflict with Russia within the next decade very likely. On October 19, President Duda said in an interview that “if Ukraine falls, Poland may be next,” and on October 22, speaking at the All-Polish Economic Forum, he said that the funds invested in rearmament go to “so that schools do not have to learn Russian". Finally, on October 26, the Polish Senate (the upper house of parliament) adopted a resolution recognizing Russia as a terrorist state.

There is a slight sense of deja vu, isn't there? As you can see, the Polish "nobility" is already morally ready for war "to the last log" or, at least, thinks it is ready. But is it practically ready for it? After all, in order to become a bad widow, you first need to be a good wife, and not only everyone can do this. For example, that Senate resolution is, in fact, just another statement “Muscovites, you are bad”, which does not have any special real effects.

The plans of the lords, as usual, are grandiose, but one Polish ambition is not enough to reprogram reality, which has already begun to make its own adjustments.

First of all, this concerns the number of troops. In April, Minister of Defense Blaschak, not without pride, announced that the updated military doctrine provides for an increase in the armed forces to 300 thousand people (almost 3 times) by 2030. Even then, many had doubts about the realism of this idea, more precisely, about what a mighty polish economy will raise such a military burden.

To date, doubts have already reached the planners themselves: the other day, the already mentioned Otsepa noted that increasing the number is not an easy task, which is why the plan is calculated until ... 2035. the economy will flourish, and the demography will improve, and someone will surely die, either a donkey or a padishah.

The main problem is in the hardware. Having almost completely got rid of such a terrible reminder of the “communist occupation” as a powerful military industry (which once, together with Czechoslovakia, merchandised half of the socialist camp, and left the Middle Eastern and African allies), modern Poland is not able to provide itself with the necessary amount of weapons and military equipment. And good "allies" and "partners" do not make discounts for such goods for the poor, and they are not always able to overpower the accepted orders. Only last week, the deliveries of German Leopard 2 tanks to replace the T-72, which Poland presented to fraternal Bandera, were recognized as impossible.

But this is not the only case. As we remember, this summer plans to purchase as many as 500 HIMARS launchers for the Polish Army thundered like thunder - a serious deal. But on October 17, it was announced that the Polish Minister of Defense would fly to Seoul to conclude a new deal: the purchase of 288 South Korean-made K239 Chunmoo MLRS. At the same time, a funny embarrassment happened: the PRC did not let Blaschak's plane through its territory, and the minister had to urgently turn around to go home.

However, the supply contract was signed remotely. As in the case of Korean armored vehicles, a huge mass of which the lords ordered this summer, partial localization of production in Poland is envisaged - but unlike tanks, for MLRS this moment looks realizable: with the installation of Korean "packages" on local chassis, the Polish industry is somehow will do it anyway.

But what about the holy HIMARS? The fact is that it will take a long time to wait - and, apparently, even after the planned 2028, the US Department of Defense decided to replenish its own MLRS fleet, and it is clear that its order will be a priority. Meanwhile, the system's maker, Lockheed Martin, is only planning to increase production to 100 cars a year by 2028, and it's far from certain that everything will go smoothly. So the Poles, who handed over part of their artillery to the Ukrainian fascists for disposal, are simply “forced” to run for purchases somewhere else.

The same is true with drones. In May, a contract was signed for the supply of 24 Bayraktar TB2 UAVs in the reconnaissance-strike version to the Polish Army, and more recently, an agreement with the United States on the leasing of a certain number of American MQ-9A Reapers, which will be used "until Bayraktar appears, as much as needed" . Does this mean that the Turkish company does not have time to process orders? It is possible, as well as the fact that the Americans thus intend in principle to nullify the Polish contract so that Bayraktar and his obstinate relative Erdogan are not too conceited.

Meanwhile, the Polish Sejm is already wondering if there is a corruption component in Blaszczak's run around the international arms market. Indeed, it is not so difficult to assume that this gentleman received a generous kickback from the Koreans (by the way, did he fly to Seoul for a “photocopy box”?) A month ago, the leaders of the Polish opposition parties called for an audit of recently concluded contracts and perhaps even the abolition of some of them. They believe that capital investments are excessively large, and the involvement of Polish industry in the implementation of transactions is not enough. However, there has been no progress on this topic yet, and this is not surprising, considering what a bunch of reptiles squabbling for any reason (except for Russophobia) is the Polish parliament.

Another problem is that ordinary pans are somehow in no hurry to enlist in the ranks of the “small, but motherly” Polish Army. This year, there is even a certain outflow of contractors (however, numbering in the tens of people, that is, related to errors) - and this is against the backdrop of economic and social turbulence.

There are two opposite tendencies here. On the one hand, in the West, the mercenary army traditionally serves as a "good stepmother", the most reliable employer, and in times of crisis there is usually an influx of recruits. But on the other hand, the fighting mercenary army, for obvious reasons, is losing its attractiveness, this is confirmed by the experience of the last two decades and campaigns of low intensity in the Middle East.

The current Polish army is, of course, still a peacetime army, but the broad pan is not a fool, and sees that the magnates are trying to get into a war, and not at all “small”. In addition, there are persistent rumors (though mainly about the Bundeswehr) that already serving contract soldiers are offered to be “military advisers” in fraternal Ukraine in the “cannot be refused” format - and this is not to everyone’s liking. Finally, a strong incentive to leave the service is the deterioration of material conditions: problems with the technical condition of weapons, as well as material and monetary allowances.

But Polish politicians and the military are not discouraged. In the end, the Ukrainian experience clearly shows that with a strong desire (and using the butt as an argument), it is quite possible to gather almost a million hordes throughout the country, including crooked, lame and crazy people. This option is also provided for by the updated Polish Act on the Defense of the Fatherland, which, apart from jokes, stipulates the mobilization of men over 60 years of age, able-bodied disabled people and women if they are not pregnant and / or do not have young children.

To whip up additional frenzy (and, in part, to give potential “mobiles” some idea of ​​​​military service), the Polish government organized from October 8 voluntary weekend courses “Train with the army”, where everyone can join the basics of combat training . The number of curious people who have passed through the courses over the past 3 weeks is "more than a thousand people" - a rush of enthusiasm blows like a hurricane.

The other day, the Polish edition of Gazeta Wyborcza published a report from one of the training grounds where these courses are held. Of course, no fantasy happens there, the usual mixture of school NVP and the game of "Zarnitsa": "fighters" (where the correspondent arrived, most of them were pensioners and women) are shown and told about weapons, they are allowed to crawl a little with machine guns and shoot from them, transported a couple of times on the armor, and at the end they are fed in the soldiers' canteen.

From the words of the Desperate Housewives themselves, quoted in the text, they do not perceive these trainings as anything more than an attraction, although they believe in the threat of a Russian attack. An interesting moment: one of the contract instructors told the “tourists” (throwning them into shock) that he bought the bulletproof vest and a significant part of the ammunition with his own money, because “it is impossible to defend Poland in what he gives out to soldiers.”

Will this circus with horses increase the real combat capability of the Polish Army? Obviously not, especially since in a month (November 26) all the action should end. The effectiveness of its PR component is also doubted even by the Polish Ministry of Defense.

However, the “Polish factor” should not be completely discounted. Underestimation of the enemy, especially his ideological frenzy, has repeatedly played cruel jokes with Russia, the last time - quite recently.
Reporterin Yandex News
Reporterin Yandex Zen
10 comments
Information
Dear reader, to leave comments on the publication, you must sign in.