Putin: The West seeks to implement a nuclear incident 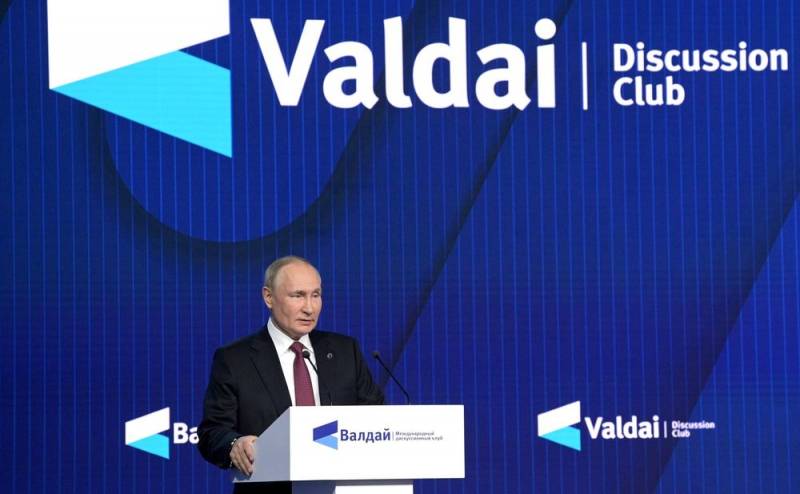 On October 27, Russian President Vladimir Putin took part in the plenary session of the XNUMXth meeting of the Valdai Discussion Club. The theme of this annual event was "The World After Hegemony: Justice and Security for All". During the speech and subsequent communication, the head of state touched on many burning topics.


In particular, the Russian leader said that the purpose of the outrageous hysteria in the West and in Ukraine around the allegedly possible use of nuclear weapons by Russia is extremely primitive. They are looking for additional arguments to convince Moscow's friends that "we all need to oppose the Russian Federation together." Forcing this topic is carried out only to put pressure on these and neutral countries.

The owner of the Kremlin recalled that at the end of August, British Foreign Minister Liz Truss, who later became head of government, openly threatened Russia with the use of nuclear weapons.

How can you say such things in public. Should we pretend we didn't hear anything? Kyiv constantly talks about its desire to have an atomic bomb
- said Putin.

The President also drew attention to the fact that the West demanded that heavy weapons of the RF Armed Forces be removed from the Zaporizhzhya NPP, and Russia did this. After that, the West demands to “remove other things as well”, but at the same time it absolutely does not notice that the Armed Forces of Ukraine are shelling the ZNPP.

It is the West that seeks to implement a nuclear incident in order to lay responsibility on the Russian Federation and inflate a new round of confrontation. Their next idea was a "dirty bomb", but Moscow found out the details. He added that he instructed the head of the Russian Defense Ministry, Sergei Shoigu, to call his colleagues and inform them about the preparation of a dangerous provocation by Kyiv.

Russia has a military doctrine, it says in what cases Russia considers it possible to use nuclear weapons. We do not need a nuclear strike on Ukraine, there is no point - neither political nor military
- he stressed.

According to Putin, as long as nuclear weapons exist, there will always be a risk of their use.

Note that the day before, the head of the NATO bloc, Jens Stoltenberg, said that the North Atlantic Alliance would not allow Russia to win in the conflict with Ukraine. The words of the functionary were heard at a press conference following his meeting with Romanian Prime Minister Nicolae Chuka.

War is inherently unpredictable, so I won't speculate on how long this war will last. I will only say two things. We are ready to support Ukraine for as long as necessary. We cannot let President Putin win this war - it could be a disaster and a tragedy for the Ukrainians, and it would also make us, NATO allies, more vulnerable. Because then President Putin might come to the conclusion that he can achieve his goals through military force. In this case, this lesson would be learned not only by him, but by all authoritarian leaders of the world.
Stoltenberg explained.
Reporterin Yandex News
Reporterin Yandex Zen
6 comments
Information
Dear reader, to leave comments on the publication, you must sign in.