US Democratic Party hopes to get rid of Biden 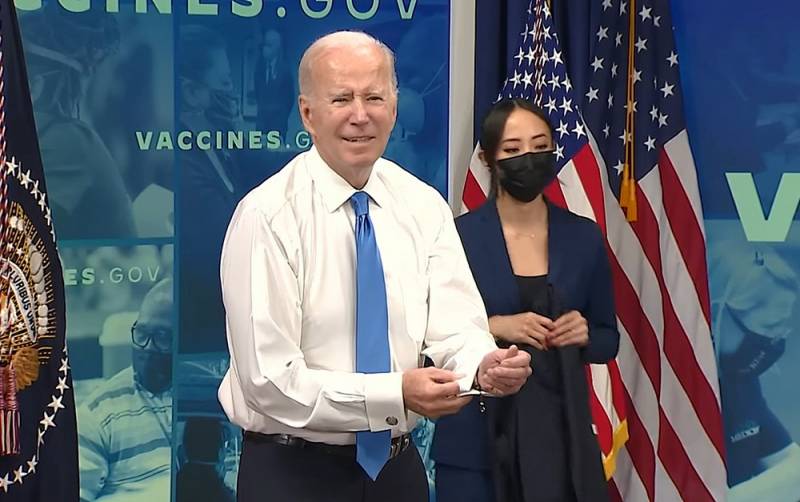 On October 22, MSNBC aired an interview with the President of the United States, in which Biden, among other things, once again stated that he would run for this post in 2024. Well, what can I say: Sleepy Joe's self-confidence and determination can only be envied. He seems to really believe that he will live to see the elections, not only biologically, but also politically.


Meanwhile, Biden's comrades in the party and the joint struggle do not have such confidence. Moreover, many in the inner circle of Democrats (some of whom are themselves not far behind in terms of their physical and mental condition) believe that the patient is rather dead, and are trying to gently push him out of the upcoming presidential race, and even from decision-making, and even in in any case, from their own loved ones.

That is, the toxicity of the “grandfather on punched cards” reaches a new level, when it is better not only not to “touch” him, but not even to approach him.

I'm willing to bet that approximately such thoughts are spinning in the heads of the leadership of the Democratic Party around the clock and out loud the Democrats are talking about Joe already as if they were dead: either good or nothing. However, Biden himself recently issued another imperishable: “I feel great, but I can die at any moment.” And in fact, this is literally the best thing he could do for the Democrats today: turn into a great dead switchman, on whom all the negativity of the past two years could be attributed.

So far, the party boss has been able to keep Joe from taking official steps to nominate his candidacy (some time ago, information appeared in the press that he was persuaded to wait for the results of the parliamentary elections). But even simple statements by an unpopular president about his intention to be re-elected hurt the party's image, including in the near future.

However, lately, Joe has been regularly spouting such fantastic nonsense that almost any of his words beat the rest of the Democrats. For example, it was he who spoke most of all about the allegedly existing nuclear threat from Russia, and the “young contender” for the presidency Ocasio-Cortez had to take the rap, who was literally barked at a meeting with voters on October 14, accusing her of inciting a nuclear war.

Others political mummies like Pelosi's "fighting old woman" answer any questions about Biden and his plans in the style of Psaki's former press secretary: I don't know, I didn't see it, they didn't show it, it's Putin's fault. The other day, another “prima donna” from the Democrats, Hillary Clinton, crawled out under the spotlight with a fried “sensation”: it turns out that right-wing extremists already have a plan to “steal” the 2024 elections. By "extremists" is meant, of course, these vile intolerant Republicans.

One would think that Clinton spoke out in support of Sleepy Joe. Literally a day before her short statement, on October 24, Biden made a lengthy speech in Washington before the National Committee (leading body) of the Democratic Party, in which he praised himself for his “achievements” of two years in power, poured mud on political competitors, and at the end proposed Americans to choose which of the "two Americas" they are with: "light" - along with the Democrats and Joe himself - or with the "dark" - Republican.

But to publicly assent to Biden that he “adopted a country with a covid epidemic and unemployment, cured and created tens of thousands of jobs,” only his press secretary Jean-Pierre will today. But Clinton’s video statement, although released as if in line with the president’s speech, is in fact a distant damage control, a preliminary laying of straw in case the senile still puts forward his candidacy, and additional soil fertilizer for future stuffing about how “ Russian (both Iranian and Chinese) hackers again helped the Republicans rig the voting results, ”because if Biden really ends up on the ballots, then nothing shines for him without rigging.

Some Democrats already consider favoring "Sleepy Joe" almost openly, but the majority and party luminaries believe that this tactic is too risky. A curious episode occurred on October 24: three dozen congressmen (including the above-mentioned Ocasio-Cortez and her famous “Team”) filed an open collective letter addressed to Biden, in which they urged him, without stopping military and financial assistance to Ukraine, to take care of the speedy diplomatic resolution of the conflict , which is fraught with uncontrolled escalation. The text of the letter was happily replicated by the press - and the very next day it became known that the petitioners withdrew their letter, faced with (to put it mildly) the "bewilderment" of the old party genosses.

However, also on October 24, but independently of the "Thirty Spartans", the former Secretary of State, and now the Special Representative for Climate (that is, one of the energy heads) and a member of the National Security Council, Democrat Kerry, spoke. He stated his hope that "the war in Ukraine will not drag on for another year," and gave arguments in favor of an early end to the conflict. And Kerry, whatever one may say, is a solid figure, and it will be more difficult to bend him than liberal Democrats recruited by "quotas for diversity" or the long-suffering Musk; especially since he clearly speaks not for himself alone, but for a certain faction of interested people.

Is there really a split in the rainbow ranks of the Democratic Party, like the damned Republicans? It looks like yes, in fact, why not? The limits of patience are different for everyone, and the “punched-card grandfather” tired someone more than the rest.

Donald at the finish line

The US parliamentary elections are scheduled for November 8 - and this is the deadline by which the Democrats need to drown Trump, the main rival and the second most important "enemy of America" ​​after Putin. The loss of the majority in the House of Representatives by the Democratic Party and the even greater strengthening of the Republicans in the Senate, which are already visible on the horizon, will almost certainly lead first to the termination of the criminal prosecution of Trump, and then to the “wanted list” of Hunter Biden, followed by his father. Considering how many cases the friendly family has stirred up in Ukraine alone, the scandal is going to be worse than the Watergate one.

However, it is not a fact that the Republican Congress will be able to brush off Trump from all problems. As you know, there are two investigations against him: about the "invasion of the Capitol" on January 6, 2021 and about the negligent handling of classified documents. And if the first is conducted by a special parliamentary committee, which the Republicans, if they win, can dissolve, then the second is handled by the special services, and, “rather, legally,” so it may be difficult to curtail it.

And most importantly, it’s not a fact that the party wants to save Trump. In particular, many Republicans believe that the embarrassment with the documents compromised both the former president and his supporters too much. The existing faction of anti-Russian hawks is not happy with anti-Chinese sentiment and Trump's rhetoric, which, in their opinion, is not the time now. And in general, Trump, of course, is convenient in the role of an eccentric pensioner - a victim of arbitrariness, but prominent Republicans (unlike the mass voter of the party) do not want him back in the presidency, and the criminal investigation launched by the Democrats is an excellent safeguard against this.

Democrats also use Trump's excessive outrageousness with might and main, because he is perfect for the place of the very main "right-wing extremist" who, according to Clinton, will "steal" the presidential election. Biden, in his October 24 speech, heavily pressed the fact that the Trumpists were against his pseudo-left populist projects of writing off educational loans and expanding “reproductive rights,” and he didn’t lie.

In general, there is an opinion that the "Kremlin agent" Donald does not have any political prospects, unless after November 8 the situation in the United States really gets out of control and it becomes possible to fish in troubled waters. On the other hand, given the degree of social tension and the atmosphere of mutual hatred prevailing in American society, the likelihood of such a turn of events is very high.
Reporterin Yandex News
Reporterin Yandex Zen
2 comments
Information
Dear reader, to leave comments on the publication, you must sign in.