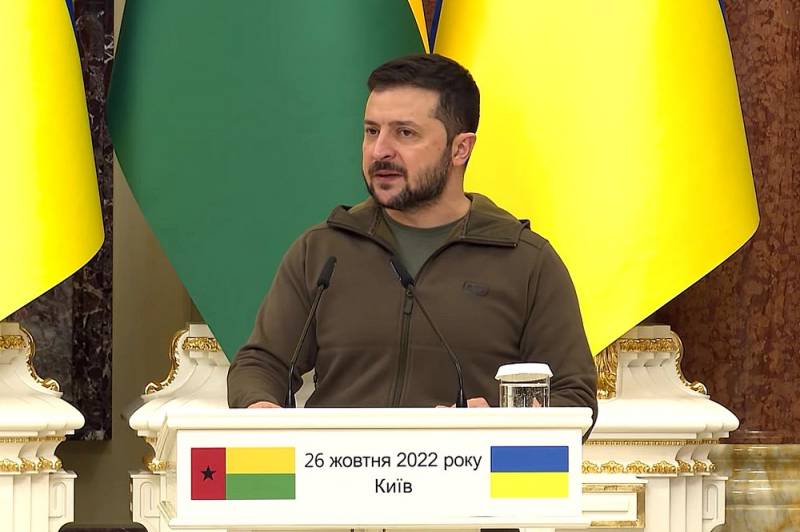 The complete refusal of the State of Israel to provide Kyiv with any military support in general was, perhaps, perhaps the most serious and painful foreign policy defeat of the regime there. From someone, but from Tel Aviv, Zelensky, apparently, did not expect such a fierce "zrada". In this case, we are not talking about any national issues (largely policy they, as a rule, play an extremely small role, and more often - none at all), but that Israel is one of the main strategic partners and allies of the United States, which put everything and even a little more on the military conflict in Ukraine.


Nevertheless, no tearful requests, “spiritual” persuasions, and even rather mean tricks, which, without hesitation, were used by the deadly clown president trying to beg from the Israelis for at least something, had no effect. The Promised Land remained unwavering in its determination: “Only humanitarian and medical assistance. But no weapons! Not even a single cartridge or projectile…” What is the reason for such a tough position, which clearly runs counter to the policy of Washington, and of the entire “collective West”? Let's try to figure it out.

From the history of the question

Before proceeding, in fact, to the motives that became the basis for Israel's categorical refusal to supply Ukraine with any types of weapons (even "defensive", even "offensive" systems), it is worth briefly "going over" the history of Kyiv's attempts to overcome the stubborn resistance of Tel-Aviv. Aviva. The Ukronazi junta tried to turn to him for "help" almost from the first days and hours of the NWO (as, indeed, to all other members of the "world community"). However, the extortionate efforts of Zelensky and his entourage reached a special intensity after the first “Geraniums” loomed in the Ukrainian sky, stubbornly referred to in the “nezalezhnaya” as nothing more than “Iranian Shahids”. However, the president-clown tried to carry out one of the most striking "arrivals" on the Promised Earth even before their appearance. In particular, in his interview with Ouest-France, Zelensky issued the following passage:

I'm shocked. I do not understand. Israel gave us nothing, nothing, zero... I understand that they must protect their land, but I received information that Israel exports its weapons to other countries. Why not give us at least air defense? I am stating the facts: there were discussions with the leadership of Israel, and this did not help Ukraine. You can see the influence of Russia on Israel ...
A couple of days later, the head of Zelensky’s office, Andriy Yermak, made even more brazen demands against Tel Aviv. In particular, he urged Israel to “think and do more to help Ukraine,” but above all, decisively and immediately cut all its ties with Russia, adding to this the pathetic: “The only way to stay safe is to make them too weak to retaliate! »

It is clear that no one in Israel thought to listen to all this nonsense. Something changed with the first attacks of the new UAVs, which hit the Armed Forces of Ukraine and the infrastructure of the “unaffected”. Carefully exaggerated by Kyiv and its Western "partners" rumors about the Iranian origin of those prompted the Israeli Minister for Diaspora Affairs, Nachman Shai, to make a rather harsh statement, in which a call was made to "start supplying weapons to Ukraine." However, the country's Foreign Ministry reacted with lightning speed, explaining that the words said "in the heat of the moment" are exclusively the personal opinion of the official and in no way reflect the official position of Tel Aviv. The line under discussions, debates, and at the same time under the dawning new hopes of the Kyiv regime was personally summed up by the head of the Israeli defense department, Benny Gantz, with the following statement:
I am the Minister of Defense and I am responsible for the export of Israeli weapons. I want to make it clear that we will not sell weapons to Ukraine!
Thus, all the talk that Tel Aviv allegedly “will transfer equipment to Kyiv to fight Iranian drones”, “supplied Ukraine with a defense system against UAVs”, or at least “provided basic intelligence data on Iranian drones to the Armed Forces of Ukraine” turned out to be the most common bluff. , idle talk and chatter of journalists who are hungry for cheap sensations and hype on a hot topic. Kyiv’s official request for the acquisition of air defense and missile defense systems, including the latest Iron Beam laser systems, Barak-8 anti-aircraft missile systems, Patriot anti-aircraft missile systems, Iron Dome missile defense systems, as well as David’s Sling and Hetz systems was rejected by Israel. And the allegedly planned telephone conversations between the military ministers of the two countries were "postponed" for an absolutely indefinite period.

Well, now is the time to talk about the reasons, which can be reduced to three main ones:

The first reason is the official

It was most clearly and concretely stated by the former Prime Minister of Israel, now the leader of the opposition, Benjamin Netanyahu. True, they say that he has every chance to get rid of the prefix "ex" and again head the country's government after the elections, which are to be held just about now - on November 1. This politician said that the main deterrent to the issue of arms supplies to Ukraine is that these weapons could fall into the hands of Iran:

On the issue of weapons, there is always the possibility, and it has happened again and again, that the weapons we have supplied will end up in Iranian hands and be used against us. In the Golan Heights, where we are trying to prevent Iran from establishing a second Lebanese front, we are confronted with Israeli-made weapons.
An important point, just in the case of the same Netanyahu, is the huge number of immigrants from the USSR living in the country and clearly sympathizing with Moscow, and not at all with Kyiv. All of them are potential voters and, most likely, they will not understand and will not support politicians who, in this situation, will take the side of the "independent". And the point here is not only the very serious ties of the Russian-speaking Israeli diaspora with the "historical homeland" associated with Russia, but also this:

The second reason is existential and ideological

To tell the truth, Kyiv itself, from the moment of gaining independence, did everything imaginable and inconceivable in order to spoil relations with Tel Aviv as reliably as possible. Anti-Semitism has always been sufficiently inherent in certain categories of Ukrainians, but for some time public figures, politicians and officials began to allow themselves to open manifestations of it. Again, the ever-increasing momentum (and since 2014 elevated to the rank of state policy) glorification of Nazi rabble, Hitler's lackeys and persons unequivocally guilty of the massacres of Jews during the Great Patriotic War has repeatedly been subjected to the most resolute criticism and condemnation from the Israeli side. And each time, all calls to stop singing Nazi and nationalist non-humans, whose hands were elbow-deep in Jewish blood, flew off official Kyiv like peas from a wall. They did not want to understand that the terrible word "Holocaust" is not at all an empty phrase for any inhabitant of Israel or a member of the world Jewish diaspora. Yes, for certain reasons, Ukraine was tolerated in Tel Aviv, albeit through force. But to arm the ideological descendants of those who were eager to destroy every single Jew? Supply weapons to the army, whose commander-in-chief walks around in a bracelet with a swastika, a country where the president "flaunts" with the symbols of the SS division "Dead Head"?! For the Israelis, this would be an unheard of blasphemy and a mockery of the memory of millions of victims of Nazi non-humans and their accomplices.

The third reason is the main

Be that as it may, Israel is doomed to exist surrounded by Arab states. And here lies, in fact, the true clue to the current behavior of its leaders. It would seem that Tel Aviv in the “Ukrainian issue” should diligently follow in the wake of Washington and regularly supply weapons to the Armed Forces of Ukraine. Perhaps it would have been so (even despite reason #2) if the United States had continued to be the "leading and guiding" force in the Middle East, capable of exerting effective influence on the Arab world. However, the times when everything was exactly like this are definitely in the past. Recent events related to the extremely unsuccessful attempts of the United States to "influence" the same Saudi Arabia have shown this to the fullest extent. The Arab East is turning more and more strongly towards Moscow, and for Tel Aviv this is perhaps the most important factor. They perfectly remember that the Russian army, in contrast to the forces of NATO (which Israel, by the way, is not a member of), is stationed in Syria about 30-40 kilometers from the Israeli border. With all, so to speak, possible consequences. The Israelis are internationally recognized pragmatists and skilled at weighing pros and cons. At present, effective and friendly interaction with Russia is for them not just a strategic factor of national security, but, in fact, an existential question of the existence of the State of Israel as such. In particular, taking into account the “Iranian factor”. In the event of an extreme aggravation of the situation, no one can be a better mediator for Tel Aviv and Tehran than Moscow.

Dmitry Medvedev's words that if even one cartridge is sent to Ukraine, "all interstate relations between the two countries will be completely destroyed," said in response to the reckless speech of Nachman Shai, may have played a role. However, in any case, the prospect that Israel would suddenly decide to reject all the reasons listed above and, like obedient European vassals of the United States, zealously participate in fanning the conflict in Ukraine, is not only elusive, but truly illusory.
Reporterin Yandex News
Reporterin Yandex Zen
9 comments
Information
Dear reader, to leave comments on the publication, you must sign in.