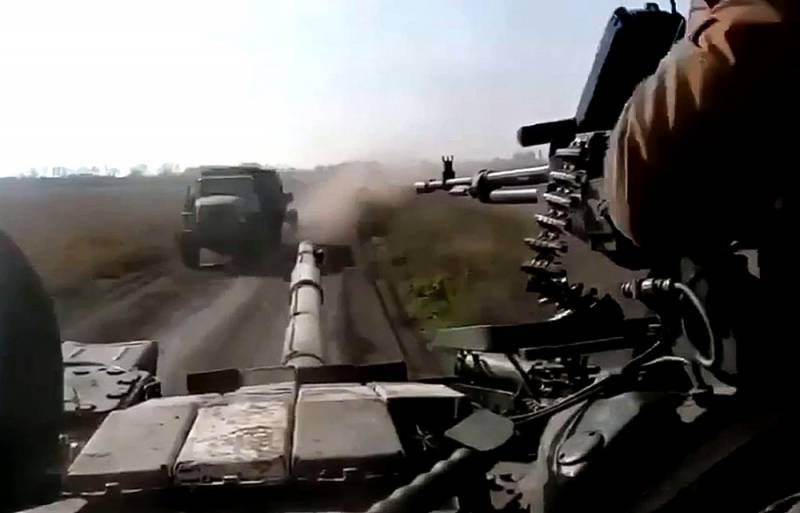 A video of a confrontation between a tank of the Armed Forces of Ukraine on the one hand and two Russian Urals-43206 with D-30 howitzers and an MT-LB armored personnel carrier on the other has been leaked to social networks. The incident occurred in the Nikolaev-Krivoy Rog direction.


Russian technique accidentally ran into a Ukrainian tank. Apparently, such a meeting was a surprise for both sides of the confrontation. The Ukrainians opened fire, but to no avail.

Both Urals passed the enemy tank, but later one of them was stopped, which can be seen at the end of the video.

A Russian armored personnel carrier opened fire in return, damaging the heavy machine gun on a Ukrainian tank. The machine gunner replaced the box. Then, after hitting the cover of the receiver, the soldier of the Armed Forces of Ukraine was wounded and had to go down into the tank. At the end of the video, artillery shells are heard.


Meanwhile, according to the Russian Defense Ministry, on October 26, the Russian Armed Forces repelled five enemy attacks in the Kupyansk direction. An attempt to attack in the Kuzemovka area was made by the Ukrainian BTG and a company of foreign mercenaries with a total number of about five hundred fighters. All attacks were successfully repelled by artillery fire and ground attack and army aviation. During the fighting, more than 160 Ukronazis were destroyed, five tanks, nine armored vehicles and ten pickup trucks were hit.
Reporterin Yandex News
Reporterin Yandex Zen
7 comments
Information
Dear reader, to leave comments on the publication, you must sign in.