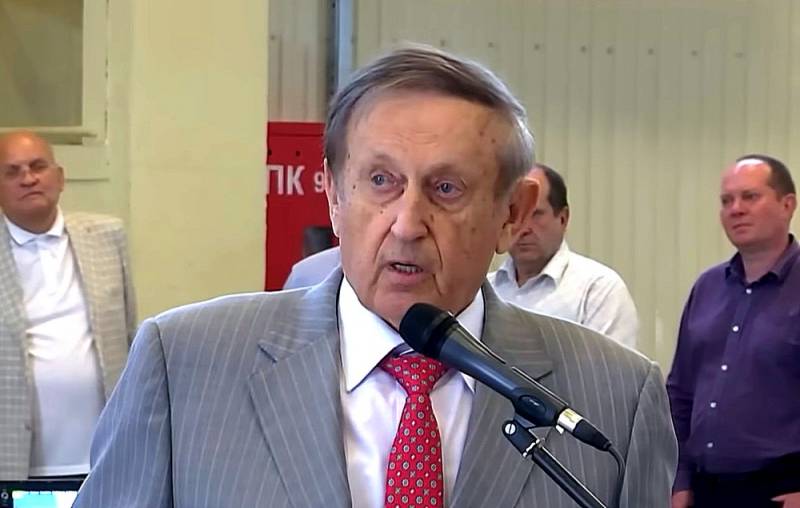 The detention and then the judicial arrest of the honorary president of Motor Sich PJSC, which has made a lot of noise in the Ukrainian information space, after which a hefty trail of international scandals has been trailing for the past few years, is assessed differently both in the country itself and abroad. outside of it. Like any “deal” hastily concocted and sewn together by Ukrainian unfortunate “law enforcement officers”, the case of Vyacheslav Boguslaev initially raises a huge number of questions and gapes with holes both in the motivational part and in the evidence.


Chief among these questions, without a doubt, is one: why did the Zelensky regime (and the go-ahead here was clearly given at the highest level) suddenly needed this scandal at all and why did it erupt right now, and not, say, a few months earlier? Upon closer examination, another round of unscrupulous fuss around Motor Sich suggests that in this particular case we have before us even brutal political repression, but the most common raiding. Or rather, another act of drama that has been going on around the long-suffering enterprise for more than a year.

Generally speaking, the main person involved in this story (in addition to Boguslaev, another top manager of the company, the head of one of the departments, was arrested) Vyacheslav Boguslaev belongs to the category of persons who have always had the status of untouchables in the “non-destructive” one. A more than wealthy and, moreover, a very public person (a former people's deputy), a hero of Ukraine, who, until his arrest, easily entered fairly high offices ... And suddenly - an accusation under two extremely unpleasant articles of the Criminal Code at once: 111-1 (collaboration activity) and 111-2 (assisting an aggressor state). Both are quite drawn to life imprisonment, and Boguslaev is already 83 years old, so this is, in fact, a death sentence. Incidentally, the detention itself, the search at the place of residence of the head and minority shareholder of Motor Sich (during which the SBU special forces acted as if they were storming the headquarters of terrorists - they took out the doors and smashed everything in a row), the sudden trial on choosing a measure of restraint - this speaks of some kind of terrible haste in which everything was done. But why? The most interesting thing is that the first block of questions, which is definitely the most unpleasant for many high-ranking representatives of Kyiv, begins from this very place. The materials provided by the SBU to the court as “irrefutable evidence of guilt” of Boguslayev include, in particular, audio recordings of his telephone conversations. They, relatively speaking, can be divided into several parts. In one case, someone in a voice similar to the voice of the accused says that he is “not at one with Ukraine” and “understands the missile attack on the territory of Motor Sich”. Such was inflicted at the beginning of the SVO - the only time and without significant consequences.

In the other, it is supposedly about much more serious things. Those that, in fact, formed the basis of accusations of "treason", "complicity" and everything else similar. There, again, someone "is negotiating the supply of the company's products for the Russian army." According to the Ukrogestapo, Boguslaev, “acting in collusion with representatives of the Russian corporation Rostec through a chain of intermediary firms in three countries of the Middle East, Europe and East Asia (in particular, firms from the United Arab Emirates and Croatia are implied), set up a scheme of illegal supplies of PJSC "Motor Sich" of military goods for Russian attack aircraft, and the products obtained in this way were used for the production and repair of Russian attack helicopters of the type MI-8 AMTSh-VN "Sapsan", Ka-52 "Alligator", Mi-28N "Night hunter". This aircraft was then used in the course of a special military operation in Ukraine. According to the SBU, the Ukrainian military found evidence during the destruction of Russian helicopters - there were Motor Sich engines. Through intermediaries, the repair of Russian aircraft using Ukrainian components was also organized. The "evidence", to put it bluntly, is so-so. Even if Ukrainian “engines” were found somewhere, they could well have been delivered even when Russia was officially and legally the main trading partner of Motor Sich, until 2014 and even more so until 2022. But even if we assume that everything was as the SBU claims, then the matter becomes even more complicated. All "damaging" records are dated March of this year! Why was it necessary to wait more than six months, having discovered such a blatant "malice"? Why was it not possible to stop the "smuggling" immediately, not to arrest the same Boguslaev immediately, as he so absurdly and clumsily slipped through? Reasonable and logical explanations here simply can not be. And this is just one of the "white threads" clearly sticking out of this case.

No less strange, by the way, is the behavior at the trial of the character himself accused of the most difficult articles. First, Boguslaev declares that he completely denies all the charges against him, and then, when the judge announces the decision to close him for two months in a pre-trial detention center without the right to pay bail, he says that ... he is “very pleased” with the verdict! Absurd? Yes, complete. Senile insanity broke out? Yes, the head of Motor Sich never looks like a senile. There is clearly something else here. Let's try to guess what it is. True, for this we need to go back a few years. Specifically, by the time when the Chinese company Skyrizon Aircraft Holdings Limited, which is part of the Beijing Xinwei Technology Group holding, acquired 56% (that is, a controlling stake) in Motor Sich PJSC. The same Boguslaev, who is now puffing in the dock, acted as a seller. True, later everything went awry - the SBU and the Antimonopoly Committee of Ukraine stood in the way of this deal, blocking it as "contrary to the interests of national security." The Chinese comrades, who had already invested a lot of money in the enterprise, were thrown with the dashing and utmost arrogance of the gangster 90s. Simply divorced, as they say, out of nowhere. For greater guarantees, Zelensky personally imposed sanctions against both the buying company and against its owner, comrade Wang Jing, so that they would not even try to rock the boat and return their own. The Chinese, seeing such a case, did not shed bitter tears, but turned to the international court in The Hague with a lawsuit for a tidy sum of 4,5 billion dollars. According to experts and specialized lawyers, their chances of winning in this case are very high. That's the story in a nutshell. And now it's time to add details.

At one time, Wang Jing accused not the state of Ukraine, but specifically Boguslayev of shameless “kidnapping”, calling his behavior “the embodiment of boundless greed and betrayal of a man who has lost his conscience, who pays for good with evil.” What is it about? Is the version true, according to which the owner of Motor Sich himself turned to the SBU in order to disrupt the deal, naturally, after receiving money from Chinese counterparties? And the Ukrogestapovtsy were glad to try - because they participated in this case not at all on duty, but with a very handsome percentage. There were such rumors at one time, and very stubborn ones. Again, let's not forget that the most ardent opponents of the sale of Motor Sich (or rather, the ones available there) of technologies) the Chinese were not representatives of Kyiv at all, but their American puppeteers and curators. Washington not only did not hide its interest in the deal not taking place, but in every possible way emphasized and emphasized it. For some time, the Americans even pretended to be ready to act as alternative buyers, which, of course, did not happen and could not happen. It hurts that they need it, they have their own factories of the corresponding profile. And there is reason to believe that overseas forces are again behind the current nix around the company. How so? Yes, very simple. One of the proofs of this can be the fact that Boguslaev's "Russian citizenship" was "discovered" just in time by "investigative journalists" financed directly from Washington. Why is all this being done and for what reason exactly at the present time? I will allow myself to state my own version, which everyone can perceive as he pleases.

Part of the Zaporozhye region, on the territory of which Motor Sich is located, has already become part of Russia. Is it likely that the rest of its territory, including the regional center, will follow the same path? Yes, and very big. Thus, the enterprise is in Russian jurisdiction. Is it realistic that in this case the Chinese comrades will make claims against him as legitimate (in fact, this is so) owners? Why not? Can things turn out in such a way that the Russian side will satisfy these claims? It may well. In any case, the lawsuit in The Hague has not gone anywhere - and sooner or later Ukraine will have to answer for it. So here's a version for you: the entire current miserable circus was started solely for Boguslaev to testify that he concluded a deal with Skyrizon "on command from Moscow", while carrying out "subversive activities against Ukraine." In light of the current Russophobic psychosis for judges in the Netherlands, this could be a weighty argument in favor of denying the Chinese their claims. Well, if Motor Sich ends up on Russian territory, representatives of the “independent” will go to court, again challenging the property rights of the Chinese side with the same argumentation. Let's not forget that the Turks also claimed the same enterprise not so long ago. True, as far as is known, such a dubious undertaking was abandoned in Ankara - too much dirt has already been spread around the company, it has become too “toxic”. And that's all Americans want...

Within the framework of this version, both the incomprehensible “slowness” of the SBU and the more than strange reaction of Boguslayev himself in court receive an explanation. There are no "repressions" here and close! There is another act of a raider performance, where everyone knows their roles and is not at all afraid of what is happening. Your will, but it is extremely difficult to explain what is happening in any other way.
Reporterin Yandex News
Reporterin Yandex Zen
2 comments
Information
Dear reader, to leave comments on the publication, you must sign in.