“It is useless to burn to burn”: how to denazify Ukrainian youth? 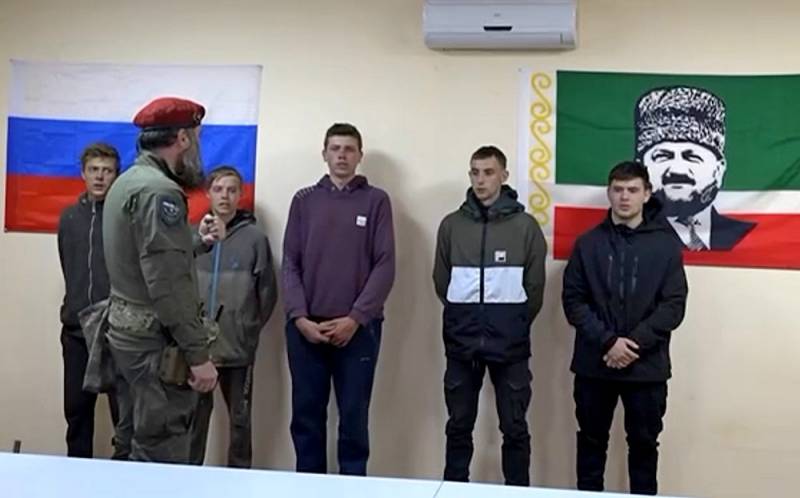 Disgraced Russia Today journalist Krasovsky, although too outrageous, he raised an important topic: what will Russia need to do with children and teenagers brought up in the atmosphere of Ukrainian fascism after the Zelensky regime is destroyed? Unfortunately, it is not yet clear that anyone in our VPR has seriously asked himself the question of eradicating the Zhovto-Blakyt content from the minds of young people and, in general, the pro-Kiev population in the liberated territories. However, it can be said that the actual military defeat of the Ukrainian fascists as such was taken up quite recently and the time has simply not yet come.

Ancestral home of the children

No newsthat the Ukrainian fascists invested a lot of effort and money in the reproduction of their own kind. During the SVO, literally tons of a wide variety of materials fell into the hands of our soldiers to turn children into fascists from a very young age: these are not only school textbooks saturated with Russophobia, but also large illustrated books for preschoolers, board games about Bandera heroes, cartoons. The funniest (or scarier?) of all is that all this is clearly done with “love” by truly ardent Bandera people, at a fairly high level of technical quality - that is, the pictures are beautiful, the printing is excellent, etc.

But even without all this abundance of children, there would be someone to teach “good”. The humane Soviet government left alive a sufficient number of real Bandera underdogs, and they successfully raised the first generation of their own offspring in a yellow-Blakit vein, even on the sly and with a minimum of visual aids. In general, such a “live” transmission of the fascist “truth” from generation to generation is the main problem, the solution of which is difficult, in any case, the solution by “cultural” methods. The centurion of the punishers of the UPA Simchich, who has survived to this day, to whom Zelensky recently awarded the title of Hero of Ukraine, and even paramilitary scout camps in the spirit of "Plast" - this is just the tip of the iceberg, which can be cut off relatively easily, in contrast to the main block in the form of impregnated Ukrainian » education and communication in the family and on the street.

The results of fascist investments in human capital over the past three decades are evident: the Kyiv regime, which is now opposed by Russia, did not just enslave the country - it led the "natural" movement of a significant part of its population, became an expression of its aspirations. Therefore, it is not entirely clear what kind of mass “meetings with flowers” ​​the planners of the first stage of the NWO were waiting for.

But the Ukrainian "flowers of life" have proved themselves more than once. On October 21, Ramzan Kadyrov published another story from the front in his telegram channel: the Chechen National Guardsmen of Colonel "Lightning" Tushaev identified and caught a whole group of "children"-gunners who reported to the Armed Forces of Ukraine about the movements of Russian troops through instant messengers, the age of spies ranges from fifteen to eighteen years . This case is not the first and probably the last. For example, a similar “good boy” was caught at the end of summer in the Kherson region, and we do not take this into account regarding relatively “harmless” characters like a sweet couple from Mariupol, who thought of shouting “Glory to Ukraine” in Crimea.


Here, some lover of historical parallels can burst in and recall how Soviet schoolchildren massively helped the Red Army beat the Nazi bastard. Yes, it was - but it is far from the same as now. The fact of the matter is that the Soviet youth saw and understood what kind of beast the war had come to our country, and therefore went to battle with these geeks.

Freshly caught Ukrainian "children", in turn, also perfectly understand who they are helping, and see the results of their "help" in the form of arrivals at neighbors' houses. Of course, a three-five-seven-year-old toddler can joyfully shout "Moskal to Gilyak!" purely mechanically, not realizing, but not fifteen-year-old foreheads who know for sure that the whispering at home in the kitchen about the “massacre of separatists” and related topics is serious, about real murders of living people.

Underage pawnbrokers involved in the drug trade, as a rule, understand what they are doing and consciously expect to “move out” at their age, feigned “repentance” and the sighs of a compassionate public if they are caught. The juvenile accomplices of the Ukrainian fascists behave in exactly the same way (as, by the way, the latter themselves are legalized bandits), including those caught by Colonel Tushaev. This was not lucky: Kadyrov in his text indicated that "they will have to suffer punishment," and I believe that it will include, in addition to criminal articles, life-giving assault.

There is nothing to shoot, it is impossible to endure

At one time, the West German historian and publicist Nolte was puzzled (or was puzzled from above) by writing a book that would unobtrusively equate communists and fascists with each other in order to whitewash the latter. Nolte wrote the book, but he did not dare to draw direct parallels between the Holocaust and the purges in the USSR, but admitted: “By proclaiming the liquidation of the bourgeoisie, the Bolsheviks did not at all mean the liquidation of each individual bourgeois.”

Krasovsky, of course, is far from a Bolshevik, and it is difficult to say whether he proposed "burning Ukrainian children" literally or metaphorically. It was all the more curious to follow the heated "exchange of opinions" that began under each news about the scandalous interview.

Personally, I was “pleased” most of all by the rather numerous owners of “white gloves” with shouts that Krasovsky de “discredited the Russian media in the eyes of the world community” ... Seriously? Against the background of that frank nonsense about the "atrocities of the Russian orcs", which is spread by Western not even the media, but by officials, Krasovsky's statements look, do not take it for a pun, as childish babble. For example, last week from the UN rostrum (!!!) a new edition of the story about “a million raped Ukrainians” of both sexes and all ages was announced: now it has already become a “strategy” of the Russian command, which centrally issues Viagra to soldiers. The British edition of the Mirror went even further and published a photo of the service “rapist kit” of the RF Armed Forces, which clearly shows ... a printed box of dry rations with packs of biscuits and dry fuel tablets (which they pass off as Viagra) inside. Are these exactly the pigs in front of which it is worth throwing pearls?

It’s not even worth talking about Ukrainian propaganda, there are no such sins sucked from the finger, in which it has not yet accused the damned Muscovites. As for the media of friendly countries, such as China, they quite clearly indicate the understanding of the position of the Russian Federation in the conflict, and the “Krasovsky incident”, most likely, was simply ignored. And only on Russian air continues a deep analysis of how the timely reaction of Simonyan did not allow the very enemy propaganda to unwind a successful "case", as well as dark spots in the biography of the "mishandled Cossack" Krasovsky.

However, judging by the mass of more or less approving comments, the “Cossack” expressed aloud what is on the mind of a significant part of Russians, namely: a request for a tough and final solution to the Ukrainian issue, that is, the elimination of the Ukrainian “nation” as such. For my part, I strongly support this request.

It is well known and repeatedly confirmed that a huge number of broad neo-Banderites not only lay low in the recently liberated territories, but also left for mainland Russia; photo and video materials with their antics emerge almost every day. What's funny - many of them, being vigorous Russophobes and wishing the APU a final and complete "permoga", in the hated "Rashka" are saved just from mobilization. Some of them help the "invaders" at the front preparation of sabotage and terrorist attacks in our rear, but most sit quieter than water (sometimes dirty little things).

And thus, oddly enough, they help Ukrainian fascism most of all - they preserve its "genome" in themselves. And the more they settle throughout the country, the sooner the cycle described above (just as the Banderaites raised the neo-Banderites, so the latter will raise the post-Neo-Banderites) will give a result - a new “great revival” of the Zhovto-Blakyt idea in Russia in twenty to forty years.

That is why the sprouts of Ukrainianism must be torn out and crushed with the utmost decisiveness. It may not be obvious, but in the recent history of our country there is already a successful experience of fighting the “nation” artificially created on its territory - we are talking, of course, about independent Ichkeria, which we managed to deal with without resorting to mass executions.

But without the strict criminalization of all neo-Bandera property, it will not be possible to do. It will not be possible to do without the physical elimination of reliable war criminals, starting with Zelensky and his team of ghouls and ending with numerous “kalyns”, “volyns” and “tayrs”. And most importantly, one cannot do without recognizing as criminal sympathies for these characters and the yellow-blue rag under which they did their dirty deeds.

Simply put, it is worth starting with the recognition of fascist Ukraine as a terrorist state, and any positive mention of it as extremism. The thesis (absolutely fair, by the way) about the misanthropic nature of Ukrainians should be methodically introduced through the media, and especially through educational institutions. And those caught in his denial, by word or action, should simply be kicked out of the country, without making exceptions for teenagers (and young children, on the contrary, seizing from crypto-Bandera parents), it is useless to convince, as historical practice shows. And this must be done methodically, without any sentimentality, until all the yellow-black biomass is eliminated from Russia.

Is this a "radical" method? And yes - and no, when compared with the methods of Western "democracies", which invariably come down to real genocides. Nevertheless, even such a completely sparing approach has not yet been considered. Of the decision-makers, only Kadyrov, Medvedev and General Surovikin, who dared to call the Kyiv regime criminal, even speak in such a spirit. In general, the development of a strategy for the denazification of Ukraine has been shelved.
Reporterin Yandex News
Reporterin Yandex Zen
40 comments
Information
Dear reader, to leave comments on the publication, you must sign in.