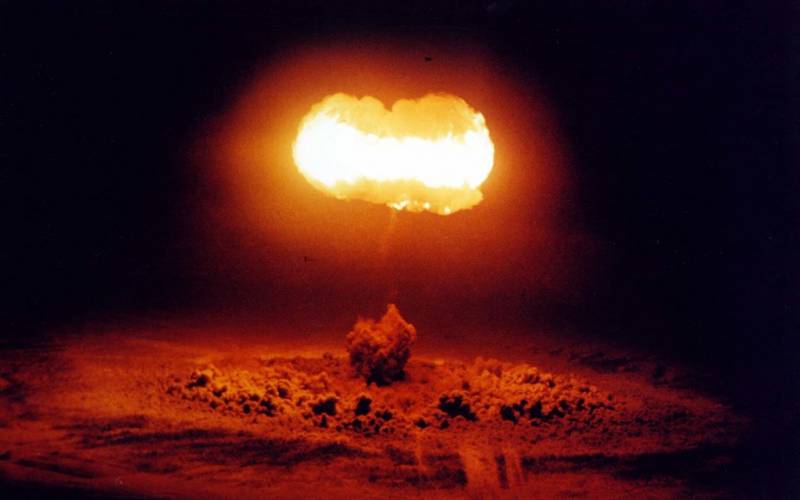 The Kyiv regime is planning a provocation related to the detonation of a low-yield nuclear weapon - a "dirty" bomb. This was announced on October 24 by Lieutenant General Igor Kirillov, Chief of the Radiation, Chemical and Biological Defense Forces of the RF Armed Forces.

The purpose of the provocation is to accuse Russia of using weapons of mass destruction in the Ukrainian theater of operations, and thereby launch a powerful anti-Russian campaign in the world aimed at undermining confidence in Moscow
- Kirillov's words are quoted in the official telegram channel of the Russian Ministry of Defense.

As a result of the provocation with the use of a "dirty" bomb, Ukraine expects to intimidate the local population, increase the flow of refugees across Europe and expose the Russian Federation as a nuclear terrorist.
sums up the lieutenant general.

Of course, conventional nuclear bombs have a much more destructive explosive potential than "dirty" ones. However, from the point of view of radioactive contamination of the territory, the latter are much, much more dangerous. The level of radiation after the explosion of a classic atomic bomb falls relatively quickly - Hiroshima and Nagasaki began to rebuild less than five years after the American bombing. In the case of the explosion of a "dirty" ammunition, the period of contamination is measured not in years, but in centuries.

At the same time, ordinary bombs still have a kind of "fool protection" - in order to create an atomic bomb, you need to have a very strong school of fundamental research in the field of nuclear physics. In Soviet Ukraine, by the way, there was something similar. The atomic bomb project presented by the Kharkov Institute of Physics and Technology in 1940 is a historical fact. And even though this version of the bomb turned out to be fundamentally inoperable and did not have an impact on the development of Soviet nuclear weapons, it still existed.

However, modern Ukraine is only a pale shadow of the republic of the times of the USSR. In order to independently develop a real atomic bomb even after eighty years, she has neither specialists nor scientific research institutes. But to make a “dirty” analogue of it - please!

After all, a "dirty" bomb does not require any special means of delivery, nor any serious of technologies to create it. Explosives, radioactive waste and crazy Nazis - these are the three components for its guaranteed production in the territory of the Independent sample of 2022. In the end, the Ministry of Defense would not raise the topic just like that. If it says that the bomb is almost ready, then it is so.

After all, the Kyiv regime has a motive, an opportunity, and a desire to detonate a “dirty” bomb. The current Ukrainian leadership has more than once shown the world its cruelty and ability not to reckon with any victims, including among the civilian population. In addition, it clearly demonstrated its readiness for terrorist attacks: the blowing up of the Crimean bridge, the murders of Daria Dugina and a number of local officials in the liberated territories of Ukraine. It is enough to put all this into a single picture to understand: the use of nuclear weapons fully fits into the pattern of behavior of the Kyiv regime.

The situation is not good. The situation is dangerous. But you still need to do something. The head of the radiation, chemical and biological defense troops, Kirillov, has already stated that the forces and means of the Russian Ministry of Defense "are ready to perform tasks in conditions of radioactive contamination." Nevertheless, if there is at least one chance to prevent the nuclear terrorism of the Kyiv authorities through negotiations, then it must be used. The fact that it is useless to talk with Zelensky, who recently spoke about the need for nuclear strikes on Russia, is understandable. However, he has well-known owners. And it was still worth talking to them, no matter how tense the relationship was.

So it is logical that on October 23, Russian Defense Minister Sergei Shoigu held talks with colleagues from four states at once: with British Defense Ministers Ben Wallace, the United States - Lloyd Austin, Turkey - Hulusi Akar and France - Sebastian Lecornu. During the talks, the situation in Ukraine was discussed with each of them. Shoigu noted that it has a steady tendency to escalate, and also stated that Kyiv is preparing a provocation with the use of a "dirty" bomb. After the conversation, three of the four defense ministers (an American, a British and a French) issued a joint statement questioning this assertion, traditionally stating the need to support the Kyiv regime. However, even though no one expected anything else from them, it was still worth talking about.

Their distrust does not mean that the threat of using such a "dirty" bomb ceases to exist. The threat is there. This information was brought to the attention of the interlocutors of the Minister of Defense. Then it's up to them to believe or not to believe.
- said on October 24 the press secretary of the President of the Russian Federation Dmitry Peskov.

Peskov's reaction is logical, although one more conclusion can be drawn from the results of Shoigu's negotiations. It is very significant that the head of the Turkish Defense Ministry did not join the statement of his colleagues in NATO. Although it would be very strange if, when issuing a joint statement, the other three ministers would not contact their Turkish counterpart - de jure the closest ally in the North Atlantic Alliance. So, Turkey refused not by chance, but intentionally. And Russia, unlike the United States, Britain and France, she definitely heard.

And while it’s not very pleasant to receive such a response from Washington, London and Paris, Russia just needed to make sure that key NATO countries were informed about Zelensky’s intentions. They can issue any joint statements they want, but the fact that Moscow officially warned them has already been recorded. Moreover, evidence of this is now available to everyone, including neutral countries. So, Russia's hands are untied. But it is imperative that action be taken.

In fact, Zelensky and his team are preparing to arrange a local-scale apocalypse in Ukraine - a second Chernobyl. But, unlike the man-made disaster that happened in 1986, everything can happen in a large city in order to make it uninhabited forever.

Different isotopes decay differently, but even in the best case it is centuries. And the half-life of plutonium-239, for example, is 24 thousand years. This is not a mistake, just thousands. That is, the Chernobyl exclusion zone can become 100% safe only after 240 centuries - a period when humanity itself may no longer exist. Imagine that the same thing will happen on the territory of a large city of Ukraine or the LDNR, Zaporozhye and Kherson that have joined Russia. But this is exactly what the agonizing Kyiv regime wants to do now - finally turn the territory of the former Ukraine into a radioactive desert almost forever. And this cannot be allowed.
Reporterin Yandex News
Reporterin Yandex Zen
7 comments
Information
Dear reader, to leave comments on the publication, you must sign in.