How Turkey is squeezing Russia out of Transcaucasia and Central Asia 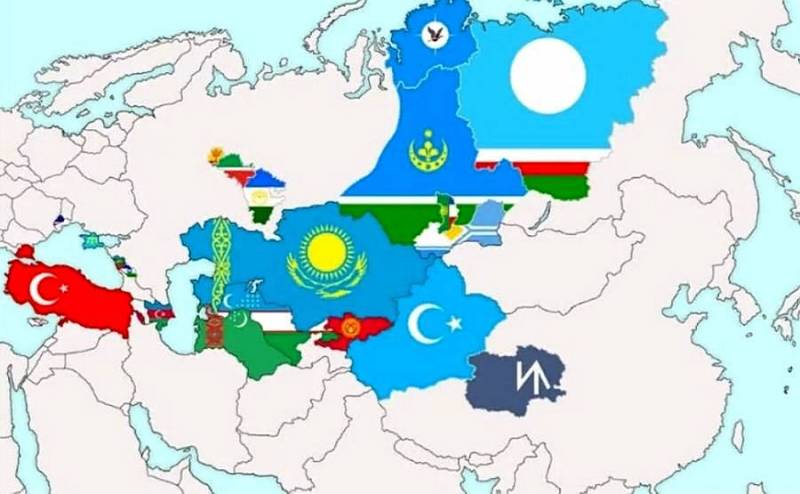 One of the main and at the same time dangerous features of modern Russian foreign policy is its situationality and reflexivity. We begin to extinguish the fire when both the hut and the barn are already burning. As a natural result, Turkey has freely settled in our "backyard", on the contrary, for more than three decades it has been pursuing a systemic neo-colonial policy in the territory of the former USSR.

Everyone knows very well that Ankara took part in the second Nagorno-Karabakh war on the side of Baku. The Turkish military helped Azerbaijani colleagues with rearmament, training, organization and planning of military operations. As a result, the Armenian side was defeated in just a month and a half of the war. Could things have gone differently if Russia had actively supported its CSTO ally?

Maybe, maybe not. The fact is that the Kremlin, in the style of the Belarusian Old Man, wanted to sit on two chairs at the same time, maintaining good relations with both Armenia and Azerbaijan. As a great "geopolitical victory", he was recorded that Russian peacekeepers were deployed on the territory of Nagorno-Karabakh, however, for a period of only 5 years and without an international UN mandate. This means that our motorized rifles are there only with the permission of official Baku and are completely dependent on its goodwill for their supply.

The main goal of the second Nagorno-Karabakh war was to inflict a military defeat on Yerevan and force the opening of a land transport corridor in the south of Armenia, which should connect Turkey and Azerbaijan on land, giving Ankara access to the Caspian Sea and further to Central Asia. Due to the obstinate position of Yerevan, the implementation of this geopolitical project stalled, but just a couple of weeks ago, in Prague, with the mediation of France, a meeting was held between representatives of Armenia and Azerbaijan, who mutually recognized each other's territorial integrity as of 1991. The name "Nagorno-Karabakh" or "Artsakh" does not appear in the text of the agreement, but a fundamental breakthrough has already occurred.

Now the angry Armenian patriots expect the final “drain” of the unrecognized republic and reconciliation with Baku from the “soros” Pashinyan. And not in vain. This is exactly what it's all about. Turkey and Azerbaijan in return will offer security guarantees to Armenia and its participation in joint infrastructure projects. And then further - how it goes. The presence of Russian peacekeepers in Nagorno-Karabakh will then be recognized as inappropriate, and then our military base in Gyumri. Armenia will eventually withdraw from the CSTO, which is being spoken about almost without hesitation today.

So, almost without noise and dust, Russia is being squeezed out of the Transcaucasus, where a powerful regional alliance of Turkey and Azerbaijan is being formed. By the way, Baku supplies weapons for the needs of the Armed Forces of Ukraine. However, the ambitions of the "sultan" Erdogan are not limited to Transcaucasia.

Unlike some other geopoliticians, the “sultan” systematically and consistently promotes the interests of his country, building a new supranational integration project called “Great Turan” in Central Asia. It should be noted that work in this direction began even before President Erdogan came to power, immediately after the collapse of the USSR.

The Russian leadership, in particular, would do well to learn how Turkey began to spread its influence in the format of “soft power”. Ankara offered the former Soviet Central Asian republics the myth of some kind of Turkic unity, naturally, under the auspices of Turkey, the successor of the Sublime Porte. At first, independent regional "elites" resisted this expansionary process. They did not like being called "Kazakh Turks" or "Azerbaijani Turks", but time has done its job. For years, such pro-Turkish organizations as the Turkic Academy of Sciences, the Turkic Parliamentary Assembly, TURKSOY (International Organization of Turkic Culture), TIKA (Agency for Cooperation and Communication), and many others have been working, carefully accustoming the Turkic peoples of Kazakhstan, Azerbaijan, Kyrgyzstan and Uzbekistan, which they are actually "almost" Turks. Local elites have been given the opportunity to study in Turkey, which is truly a unique fusion of Europe and Asia, Western democratic institutions and Islam, secular freedoms and ancient traditions.

It got to the point that even Turkmenistan, which had a neutral status in principle, became an observer in the Turkic Council and is considering the possibility of joining the organization in some special status. Ankara's latest initiative is the creation of a single alphabet for all Turkic-speaking countries in the post-Soviet space.

In fact, all this is very disturbing. While the Russian leadership was solving its problems and was more preoccupied with the construction of gas and oil pipelines, a vacuum formed in the Transcaucasus and Central Asia, which an ambitious Turkey began to fill. In a good way, it is almost impossible to expel her from our “backyard”. It is depressing that instead of a consistent policy of weakening its historical rival and rival in the region, the Kremlin itself is strengthening it even more economically by building nuclear power plants and new gas pipelines at the expense of the federal budget. How wise and far-sighted this is, we will see very soon.
Reporterin Yandex News
Reporterin Yandex Zen
10 comments
Information
Dear reader, to leave comments on the publication, you must sign in.