"Hackers and feminists, two steps forward!" How the West fuels instability in Iran 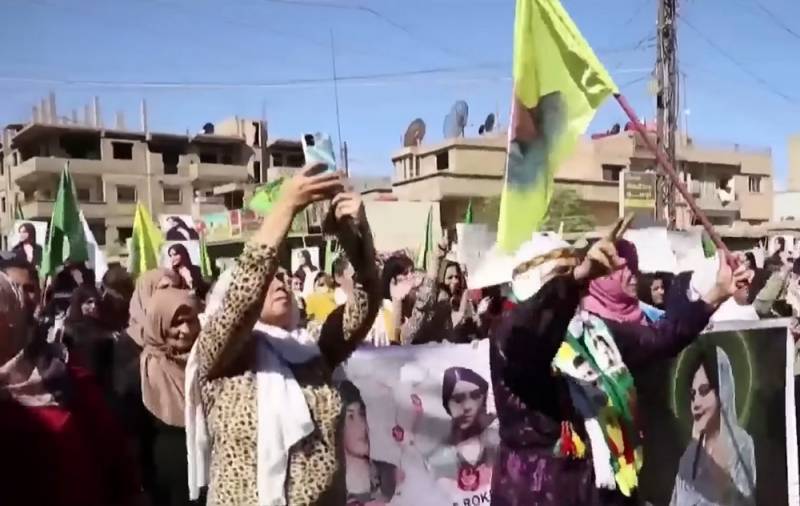 The popular unrest in the Islamic Republic, which has been going on for more than a month, will not be allowed to subside by “well-wishers” from outside. By the end of the first decade of October, the situation seemed to have stabilized: after the rolling blackouts of Internet access and the arrests of the most remote provocateurs, the excited masses began to leave the streets. Young girls continued to take part in demonstrations, but the number of young men and men involved in pogroms decreased noticeably, which lowered the intensity of passions...


... But then General Surovikin went to work, and the All-Ukrainian "end of the world". And since the Persian loitering munitions played a huge role in this “apocalypse now”, the US and the gop company have an urgent need to increase pressure on Iran. However, the "black kerchief revolution" that began towards the end of September was, from the very beginning, a means, including against the strengthening of Russian-Iranian military cooperation.

Based on the results, so to speak, of the first round of this very “revolution”, organizational conclusions were made by both sides, but not the fact that they were correct. Judging by the statements of officials of the Islamic republic, the protest movement is considered suppressed, and the ongoing hesitation is residual. The Americans, on the other hand, seem to consider their tactics on Iran to be generally correct, and its failure as an unfortunate set of circumstances against which recipes are now being sought.

On the diplomatic front, the united forces of Western diplomacy are advancing on Iran, which strongly condemned the supply of "terrorist weapons" by Tehran to Russia. The Iranian government took up a dead defense, “deaf” in the literal sense of the word: it simply denies all claims to the origin of the “Geranes” in unison with our Foreign Ministry (“the name is written in Russian, which means Russian!”) Ayatollah Khamenei himself notably trolled the Europeans: “ Then you claimed that Iran did not have drones, and now you say that there are.”

Surprisingly, for some reason, the Western "partners" are not satisfied with this - their favorite - approach performed by Iran. On the one hand, the “white gentlemen” who do not accept double standards are trying to use the authority of the UN: on October 21, Great Britain, Germany and France submitted a collective letter to the secretariat of the organization with a call to “investigate” the supply of Iranian kamikaze drones. A spokesman for the Iranian Foreign Ministry voiced a sharply negative reaction to this attack, threatening the countries that initiated the resolution with some kind of "responsibility."

On the other hand, there is an old, kind, cheap work for the public, mainly with the calloused hands of the yellow-Blakyt “victims of aggression”. During the week, a number of Ukrainian officials, including Secretary of the National Security and Defense Council Danilov and Advisor to the Minister of Internal Affairs Gerashchenko, loudly spoke either for breaking diplomatic relations with Iran, or for imposing sanctions against it, or asking for sanctions from Western "partners". On October 18, Ukrainian extras picketed the diplomatic missions of the Islamic Republic in Kyiv and Warsaw, accusing Tehran of "complicity in the war crimes of the orcs."

Naturally, under such pressure from vox populi, the United States and the European Union imposed sanctions against three Iranian officials and the Shahed Aviation Industries aircraft manufacturing company, which produces various types of UAVs and helicopters. And to increase the negative through the media, stuffing is made not only about the imminent deliveries of Iranian ballistic missiles to Russia (as practice shows, this may turn out to be true), but almost about the direct participation of the IRGC soldiers in hostilities side by side with Russian troops . It was none other than Pentagon spokesman Kirby who said on October 20 that “Iran is conducting direct combat operations on the ground,” and some Ukrainian media channels immediately reported that several Iranians were allegedly killed by the “invaders” on the front line.

However, "Shaheda", "Fathi" - it's all right, to scare children. Adults operate with the categories of nuclear war like hot snacks, and the Iranian theme could not do without them either.

On October 22, reports surfaced from the Iranian anti-government hacker group Black Reward, claiming that its members had hacked "the entire Iranian nuclear program." As confirmation, the hackers posted a video of a certain reactor plant and a number of scanned documents for public access, and in case of failure to fulfill their demand to release all political prisoners within XNUMX hours, they promised to publish all the secret materials they received.

Official Tehran partially confirmed the data leak: on October 23, the Atomic Energy Organization announced that the mail of one of its subcontractors was hacked and correspondence containing information about the nuclear program was stolen. The amount of stolen information is not specified.

However, even if the hackers did not steal “everything”, but only some part of the data, the problem is very serious. Recently, a real anti-nuclear hysteria has been inflated in Western society and elites, and under it the Iranian “case” can go so well that preparations for any military operation against the Islamic Republic will begin (at least in the form of missile and air strikes on compromised objects ). It’s not for the Iranian government to make a deal with the Black Reward: “who needs it” secret information has already gone anyway, and they demand to release not only and not so much students arrested at rallies, but hardened enemies of the regime from among the Kurdish separatists and OMIN.

In general, no matter how the matter ends, it is already possible to talk about the serious success of Iran's enemies on this front.

Apparently, the American administration decided that women's protests are a kind of "wonder weapon" in the framework of rocking internal unrest in Iran. In any case, on October 21 in Washington, a group of high-ranking officials met with political emigrants from the Islamic Republic. politicians led not by anyone, but by the chairman of the Gender Policy Council, Klein. According to rumors, at the “concilium” it was about how to use the “sisters of democracy” more effectively to overthrow the hated regime of the ayatollahs.

Most third-party commentators, trying to understand the logic of betting on the weaker sex, come to the following scheme: they say, girls and women go out to Maidan, the police start turning them around, and this provokes men to fight with her - husbands, fathers, brothers of “they are girls”. I will allow myself to disagree with this scheme, because the slogans under which they are trying to bring these same “girls” to the street condemn not only the clerical system of Iran as such, but also, in principle, the old-fashioned patriarchal value system, in which a woman is more an object than a subject. That is, it is assumed that the conditional husband-father will come out to support his wife-daughter in the struggle for the right not to obey unquestioningly to him? Doubtful.

In my opinion, the logic here is somewhat different and is similar to the logic of mobilizing teenagers and immature youth for anti-government protests in Russia. The bet is on a combination of feelings of oppression, suppressed social activity, lack of life experience and hormonally motivated behavior - in short, that unafraid reactive fools are easy to manipulate.

Characteristic are the images that young Iranian women are caught with, like a lure: well-known (well, at least to us here) glossy photographs from Iran in the 1960s and 70s, in which luxurious ladies in half-open dresses or even swimsuits pose side by side with cheap cars. A kind of embodiment of "Persia, which we have lost" - more precisely, which these disgusting pilgrims destroyed and crushed under themselves. And then there is just the heir of that very brilliant shah, who just give power, and he will immediately “return everything back” ... About the fact that in those photos there are representatives of a few high society, and the absolute majority of the population of Iran under the “brilliant shah "lived in poverty (and according to the patriarchal canon, by the way), of course, they don't talk to stupid" warriors.

In addition to fresh theses for this audience, Washington is also looking for new technical ways to reach it. Temporary restrictions on Internet access, practiced by the Iranian authorities in suppressing protests, turned out to be very effective: anonymous "coordinators" from abroad turned out to be unavailable, and without them local "leaders" of agitated crowds were already lost on the street. In addition, it became known that some British media broadcasting to Iran could be declared terrorist organizations in the Islamic Republic - and not without reason, since they are actively engaged in incitement and "advice" to organize sabotage and unrest (just like Russian-language pro-Western media-foreign agents).

In this regard, the American government again turned to the long-suffering Elon Musk with the question of whether the billionaire can now also provide Iranian “freedom fighters” with access to Starlink? Actually, a month ago, Musk himself was not averse to providing the latter with his satellite Internet, but a lot has changed since then, including the businessman's relationship with the Biden administration. In addition, even if access to the system is opened, what about the physical delivery of Starlink terminals to the Islamic Republic? They won’t let them open, and the smuggling and deployment of tens and hundreds of “plates” is hardly possible.

So the Iranian government should not worry too much about this "flank". But, having shown resistance to buildup from within, Iran thereby gave additional arguments to the Israeli, American and, possibly, Turkish "hawks" who advocate direct intervention from outside. Whether the States would risk making such a big mess amid their own internal problems is still unclear.
Reporterin Yandex News
Reporterin Yandex Zen
Information
Dear reader, to leave comments on the publication, you must sign in.