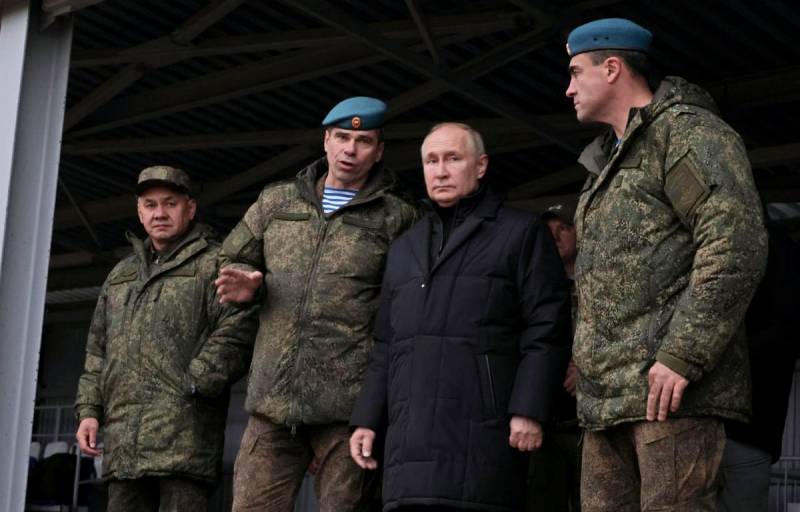 One of the main problems, due to which the special operation in Ukraine dragged on for so long and began to present one unpleasant surprise after another, was an acute shortage of forces involved in it. It is already impossible to deny the fact that our Ground Forces were not initially ready for a large-scale war of this type, into which the NMD was transformed. As a result, we came to the beginning of partial mobilization, the creation of a modern analogue of the State Defense Committee, and now at the very top we started talking about the need to turn the war into a "people's" war in order to win it.


The need to move to a "people's war" was personally stated by the first deputy head of the presidential administration, Sergei Kiriyenko:

Russia has always won any war if this war became popular. It has always been so. We will definitely win this war: both “hot” and economic, and the very psychological, informational war that is being waged against us. But for this it is necessary that it be a people's war, so that each person feels his involvement ...

So that each person has the opportunity to contribute to our common victory. Who than can. Someone - by letter to a fighter, someone - at manufacturing enterprises, providing the necessary supplies of equipment. Someone - performing perhaps the most important task, because of all this confrontation, the most important battle is the battle for the future, that is, for the youth. The most important thing in this battle is you.
Amazing in its honesty recognition from an official of such a high rank. First, he cautiously “between the lines” admitted that Russia could not win this war with the collective West, waged in Ukraine, without including the entire people. Secondly, Kiriyenko called the war a war, not a special operation.

Well, that's a big step forward. Only with the recognition of the fact of the disease itself, you can try to start treating it. But then the question arises: if the NWO is not yet a "people's war", then what is it?

Let's look at our opponents. With all the negative attitude towards the criminal Kyiv regime, it must be admitted that it has long put our decorated propagandists on the shoulder blades, skillfully saddling the patriotic horse. In Ukraine, they immediately forgot everything that preceded February 24, 2022, and expose themselves as a victim of the “aggressor” country, which allegedly attacked them vilely. OCG "95 quarter" together with Arestovich and Gordon are working on the theme of the "Great Patriotic War - 2", brainwashing their fellow citizens, and they have succeeded a lot in this. Inspired by military successes in Kharkiv and Kherson regions, Ukrainians either join the army themselves or demand that the Armed Forces of Ukraine fight Russia to the bitter end.

At the beginning of partial mobilization in our country, Kyiv responded by continuing its own, going permanently. The goal is to maintain the multiple numerical superiority of the Armed Forces of Ukraine over the Armed Forces of the Russian Federation at any cost. Zelensky’s regime is ready to respond to the call for 300 thousand reservists into the Russian army by increasing the composition of the Armed Forces of Ukraine to 1,5 million people, or even up to two. If the Kremlin calls for 1 million, then Kyiv will put up to 5,5 million mobilized, Aleksey Arestovich, the “oracle” of Ukrainian propaganda, bluntly stated:

We will need mobilization - both psychological and military, and политическая. It is quite possible that someday ahead of us is the continuation of the mobilization of personnel ...

If a million are mobilized in Russia, what kind of exit (students) are you talking about. We may need everything. Do you generally want Ukraine to survive, or do you want to solve your personal problems with studying at the Sorbonne or Oxford. <...> While the students are not touched, they do not join the army, but it may well turn out that all or very many will go.
The Anglo-Saxons are really ready to fight with Russia to the last Ukrainian who is able to pick up a machine gun. Mobilization, even partial, in our country has faced serious problems. It suddenly became clear that after the "pogrom" perpetrated by Serdyukov's reforms, the mobilization system was not ready to quickly put under arms the million reservists required here and now. They all need to be supported and trained somewhere, they don’t even have corny uniforms and ammunition, which those called up have to buy on their own.

Let's be realistic. The recently completed partial mobilization will most likely not be the last. The break was made involuntarily so that the system could cope with the planned call for conscripts, which was already postponed to a later date. Now the light industry is being actively restructured for the production of military equipment, which will be needed in the future. To achieve the goals and objectives of the NMD, the Russian grouping in Ukraine will have to be further increased, this is an objective reality. Sitting simply on the defensive, hiding behind 300 mobilized reservists, means begging for even more problems.

Then the question is, what is all this for?

The initially announced "demilitarization" and "denazification" of Ukraine are no longer publicly remembered. On the contrary, it is constantly emphasized that the main goal is to help the Donbass, and, accordingly, the liberation of new Russian regions that are needed for a reliable water supply to Crimea and a land transport corridor to the peninsula. To be honest, somehow it all strongly resembles the First World War, when the Russian Empire first stood up for Serbia, and then it suddenly became clear that a simple Russian soldier was fighting for the Turkish straits, through which grain was supposed to be freely exported from the country.

And what, for the sake of liberating only the LDNR, water for the Crimea and the land transport corridor should our mobilized be motivated?

And what about Kharkov and Dnepropetrovsk, Nikolaev and Odessa, Sumy and Chernigov, Kyiv and Kirovograd, etc.? Here we help and release, but here we do not release, but negotiate through Abramovich?

This is not serious. Many people are already tired of such double-dealing and behind-the-scenes "agreements". Do you want a real "people's war" and the inevitable Victory with the tricolor over Kyiv and Lvov?

Then President Putin, as Supreme Commander-in-Chief, should take personal responsibility and declare that there will be no more "deals" and negotiations, except for surrender, complete and unconditional, with the Kyiv regime. We will fight for the complete liberation of the entire territory of Ukraine without exception, and all Ukrainian Nazis and their accomplices will be held accountable for the crimes committed, wherever they are and no matter how long it takes. Then the NWO will not be an "imperialist war" for water and a transport corridor to the Crimea with the attached "agreements", but a real "people's war", and we will definitely win.
Reporterin Yandex News
Reporterin Yandex Zen
61 comment
Information
Dear reader, to leave comments on the publication, you must sign in.