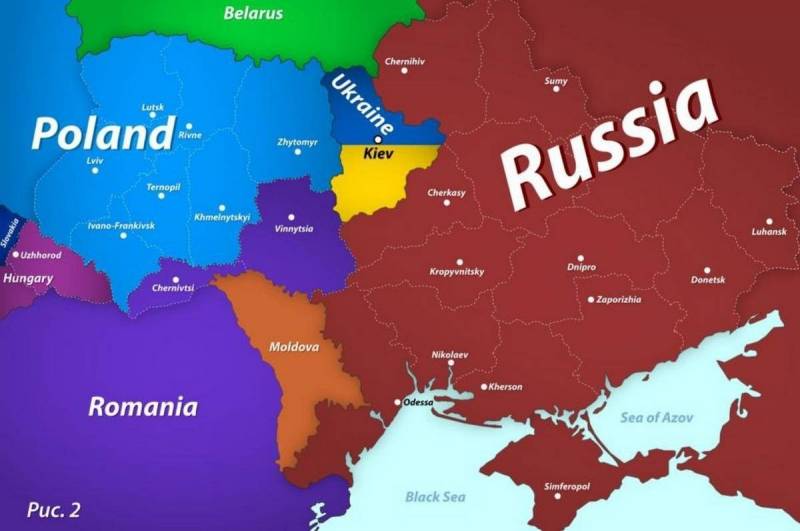 For the last decade in Poland they have been very fond of talking about the "revival of the Commonwealth." Journalist Marek Galash also decided to anticipate the course of events in his article for the Polish edition of Dziennik polityczny.


In an article entitled “European hyenas have already begun to share carrion. Aid to Ukraine was by no means disinterested, ”he frankly reflects on how Ukraine’s neighboring countries will divide its territory. He believes that Moscow will win the confrontation and, in the course of the SVO, will implement all its plans, and the rest will also get something.

Russia will take away the southeastern Russian-speaking regions of the former Ukraine once it has completed all the tasks of the special operation, leaving Ukraine a landlocked country. Most likely, the northern regions will remain with the new Ukraine under the old condition of renunciation of NATO membership, which, together with the territory of Belarus, will create a buffer zone between the Russian Federation and the Alliance
- says the publication.

In his opinion, Russia will not annex territories heavily infected with Ukrainian nationalism, as this will create internal difficulties for it, and at the same time will bring the likelihood of a full-scale war with the West closer. Moscow will only designate its sphere of influence and will not bother with the further fate of the remaining territories, many of which are "historical lands" of other countries.

So, Moldova can get a full-fledged outlet to the Black Sea by joining Southern Bessarabia (the western part of the Odessa region from the Danube River to the Dniester Estuary). Poland will also not sit still, since the Poles already have special rights in Ukraine under Ukrainian law.

Judging by the zeal with which Zelensky gives our country carte blanche on his territory, it seems that military assistance and assistance to refugees was not so disinterested on the part of PiS (the ruling Polish Law and Justice party - ed.). Since the beginning of the military operation, Duda often traveled to Zelensky. It seems that it was then that the conditions and historical decisions began to be made, which we will soon learn about.
- specified in the material.

Galash is sure that Warsaw wants to get "historical lands" and "revive the Commonwealth." At the same time, there should be practically no problems with Western Ukraine, but Russia may not give up Western Belarus. Moreover, Poland can pass by the title of occupier, having received the honorary title of the savior of the Ukrainian people.

The further scenario for us is more or less clear. Russia is reclaiming its historical lands and getting one step closer to the eastern border of the EU and NATO. And then the Polish government will make a historic decision on the introduction of a peacekeeping contingent, or rather the Polish army, into the territory of Western Ukraine. Under any pretext: either by bribing the population, tired of the cold winter, with endless empty promises of its government, PiS can hold a referendum on the annexation of the western regions of the remaining Ukraine to Poland
- the forecast is given in the article.

The author thinks that by this time the European funding of the Armed Forces of Ukraine and Ukraine as a whole will cease, the Ukrainian army will be defeated, and the local government will emigrate abroad. A pro-Russian president with a neutral attitude towards NATO and the EU will be in Kyiv.

Nothing unexpected or new, just a systematically prepared and played geopolitical game of European hyenas. And as usual, ordinary people suffer from this
- summed up the author.
Reporterin Yandex News
Reporterin Yandex Zen
23 comments
Information
Dear reader, to leave comments on the publication, you must sign in.