"Extremely northerly wind": the West is increasing its presence in the Arctic 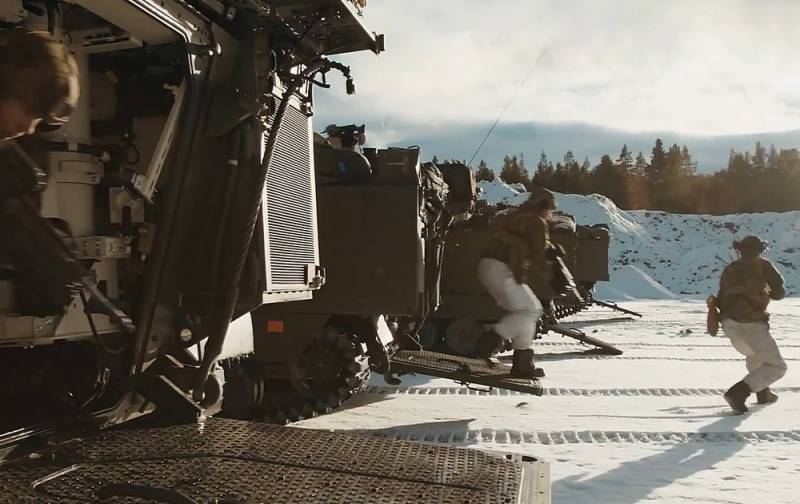 As you know, "dictator Putin" (or, if you like, "aggressive Putin's regime") has only two ideas in mind: to enslave Ukraine and arrange a nuclear war. You can do it one by one, you can do it at the same time, one does not interfere with the other.


During the week, they just tried to make another fried sensation out of an ordinary, in fact, case. On October 18, two Russian Tu-95MS missile carriers were patrolling in neutral space abeam Alaska, which they often do. Our planes did not violate the borders of the United States or Canada, but entered the enemy air defense visibility zone, extending hundreds of kilometers beyond the terrorist waters. As usual, the Americans raised a pair of their F-16s, which "led" our "95s", remaining, however, at a respectful distance.

All this mutual activity on duty has been an absolute norm since the 1970s: they “cheer” us, and we “cheer” them, and everyone understands that there is no need to make too sudden movements. However, this didn't stop the high-flyers on both sides of the barricades from inventing headlines like "Russian bombers invaded NATO airspace, but were expelled from there by alerted fighters."

But this incident, or rather, the “incident”, is far from the first this year (there were similar ones, for example, on August 8-9, and on August 16 a British plane violated the border of the Russian Federation over the White Sea), and hardly the last. Dominance in high latitudes promises solid profits, so it is not surprising that not only Russia and the Anglo-Americans, who were ordered by their geographical position, but also China and even the European Union are turning their attention to them. So far, the main resources of all applicants (except China) are occupied in the Ukrainian campaign, but the Arctic will clearly be one of the next theaters of some kind of action, possibly military ones.

The topic of cooperation beyond the Arctic Circle was one of many that were discussed at the 5th Eastern Economic Forum held on September 8-XNUMX. Among the projects are the development of hydrocarbon deposits, and even the "Northern Silk Road", which in the future will ensure the delivery of Chinese goods to European markets more reliably than the current routes through the Pacific and Indian Oceans.

True, a curious nuance is that many of the promising projects for the development of the North (both "red" and "blue") are based on the calculation that in some foreseeable future, in 20-50 years, the notorious global warming will make the region more hospitable. In particular, it would be extremely favorable for the organization of international trade routes if the glaciation boundary moves further to the Pole, and it becomes possible to navigate the Northern Sea Route at least most of the year without the company of icebreakers.

There is a catch with this: the concept of global warming (as, indeed, the “nuclear winter”) has long turned from scientific into political and populist, so it is already difficult to say whether there are any authoritative studies of this problem. Literally over the past two or three months, only in the philistine's field of vision, several materials have appeared containing polarly different statements. Some argue that by the middle of the century it will be +50 Celsius on average at the equator, and the polar caps will seriously decrease in size, while others claim that, despite fluctuations, the long-term average temperature of the planet has not changed in general. In the Soviet scientific community, indeed, the point of view was popular that over the years the Earth would only cool down, and projects were proposed for the artificial melting of polar ice as a means of combating "global cooling". And who to believe?

However, even if the Northern Sea Route does not become a “silk route”, with modern technique extraction of raw materials and other activities beyond the Arctic Circle are possible even under the current climatic conditions. For the United States and its new old "allies" the oil and gas jackpot is the most tasty in the region, so it is not surprising that they are trying to stake out the maximum area for themselves.

Anchorage Frontier and the Snow Queen

The states have been militarizing this area since the 1950s-1960s. At that time, bombers were the main carriers of strategic nuclear weapons, and in order to repel a potential massive Soviet strike across the North Pole, almost all of Canada was turned into one continuous air defense position area, armed with both conventional and nuclear anti-aircraft missiles.

With the development first of ICBMs, and then of new means of warning of a missile attack, priorities changed, and the value of the northern military lines fell markedly. The collapse of the Soviet Union and, as it seemed at first, the leveling of the “Russian threat” further crippled NORTHCOM. So the growth in recent years of interest in the Arctic from Russia and China has become a real gift from heaven for the "northern".

There is an opinion that it is the headquarters of NORTHCOM (which is responsible not only for the polar regions, but also for the North American continent as a whole) that is the main, if not the initiator, then the beneficiary of the stuffing about the malicious Russian bombers plowing the Bolshoi Theater near the Canadian borders. In particular, last summer, arguing with other "incidents" of a similar nature, the commander of the "northern" Van Herk sought from the Pentagon a significant increase in the budget of his direction. A solid volume of military construction is planned, including the expansion of the radar network (including over-the-horizon ones) and hydroacoustic posts. It is not entirely clear whether the opportunities available to the Americans are really not enough, or whether the matter is more in the "cut", but the fact remains.

However, civilian agencies are not lagging behind. At the end of August, even before the start of the WEF, Biden established the position of special ambassador for cooperation in the regions of the Far North - fortunately, there is someone to "cooperate" with.

In addition to the obvious Canada, as noted above, very tightly integrated into American military preparations, the bulk of the "allies" are in Europe. "Far-northern" cooperation with them is carried out both directly and through the British "laying" in the form of the Joint Expeditionary Force block, which includes Denmark, Sweden, Norway, Finland, Iceland and the "Baltic tigers".

From a purely practical point of view, all this fuss with the official involvement of Scandinavia in NATO does not make much sense - both Finland and Sweden are already tightly involved in military preparations. In particular, at the end of July, joint British-Finnish maneuvers took place, and more recently, British-Swedish exercises of deep intelligence units (that is, raid groups capable of operating independently away from the front line). And the United States recently concluded with Sweden an additional reinsurance agreement on military cooperation.

So that move had, rather, a propaganda goal, a demonstration of the “rallying” of Europe in the face of the “Russian threat” - but, ironically, it exposed mutual claims within NATO, resting on Turkey’s harsh refusal and the “balanced” position of other members regarding the admission of Sweden and Finland to the alliance. Now, against the backdrop of a crisis that is sucking Europeans deeper and deeper, it is already simply stupid to talk about some kind of “rallying” - and nevertheless, there have been some shifts on the integration issue.

On October 22, the Hungarian government announced that the parliament would ratify the accession of the Scandinavians to NATO by the end of this year, and Hungary in this topic (as, indeed, on many others) practically followed in line with Turkish policy. Turkey itself had its main claims specifically against Sweden, so there is reason to believe that at least Finland will soon receive Turkish approval. Or maybe she is not alone - in any case, the new Swedish Prime Minister Kristersson, who plans to personally visit Ankara in the near future, is clearly counting on this.

Be that as it may, the growing interest of "partners" in the Arctic is obvious, while Russia is forced to focus all its attention and resources on the Ukrainian conflict. On the other hand, whether the States themselves, and even more so their "allies", have enough strength to implement Napoleonic plans around the world, or whether they will soon be swallowed up by internal problems is a very big question.
Reporterin Yandex News
Reporterin Yandex Zen
Information
Dear reader, to leave comments on the publication, you must sign in.