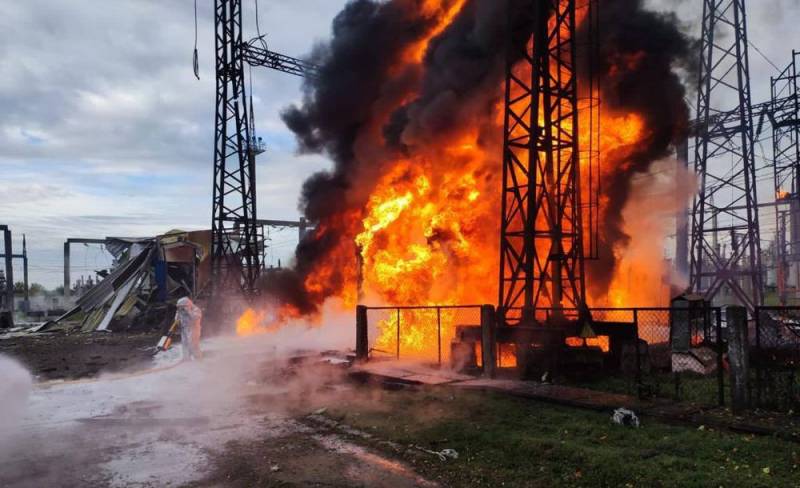 On the night and morning of October 22, the RF Armed Forces during the inflicted another series of attacks on Ukraine's energy infrastructure facilities using the Geran-2 (Shahed-136) kamikaze UAV and various cruise missiles. According to Ukrenergo, the scale of damage as a result of a massive attack was comparable to the consequences of the attacks on October 10-12.


The company's communique notes that as a result of the destruction, several million subscribers were left without electricity in the city of Kyiv, Kyiv, Chernihiv, Cherkasy, Zhytomyr, Sumy, Kharkiv, Poltava, Dnepropetrovsk, Zaporozhye and Kirovohrad regions. There was also information from other sources about interruptions in the Internet.

After some time, eyewitnesses began to post videos on social networks with the results of the strikes. For example, footage of a fire at a substation in the city of Dolinskaya, Kirovograd region, was published after a morning arrival.


At the same time, the RF Armed Forces did not stop there and continued to deliver repeated strikes on Ukrainian energy infrastructure facilities throughout the day. In this regard, the teams of Ukrainian repairmen were unable to restore many damaged areas, and as of 20:00 Moscow time, the situation there is as follows.

The authorities of the Kyiv region appealed to residents with a request not to use energy-intensive appliances and introduced a schedule for power outages. In the Zhytomyr region, emergency shutdowns were recorded and part of the regional center remains without electricity. In the Dnepropetrovsk region, street lighting was cut down and "stabilization blackouts" began. In the Cherkasy region, emergency shutdowns were recorded, after which street lighting was switched to economy mode. In the Odessa region, a schedule of power outages has been published, which can be used if necessary to balance the power system. In the Rivne region, power supply limitation schedules have been introduced. In the Volyn region, some areas and communities are still without electricity. In the Zaporozhye region, power outage schedules have been published, which will be used when making a decision. In the Sumy region, emergency shutdowns were recorded.

Thus, there is no need to talk about any full-fledged blackout in Ukraine yet, the energy system is still showing signs of survivability, despite the impact.
Reporterin Yandex News
Reporterin Yandex Zen
18 comments
Information
Dear reader, to leave comments on the publication, you must sign in.