Kyiv write off? Republicans are preparing to cut Ukraine off from funding 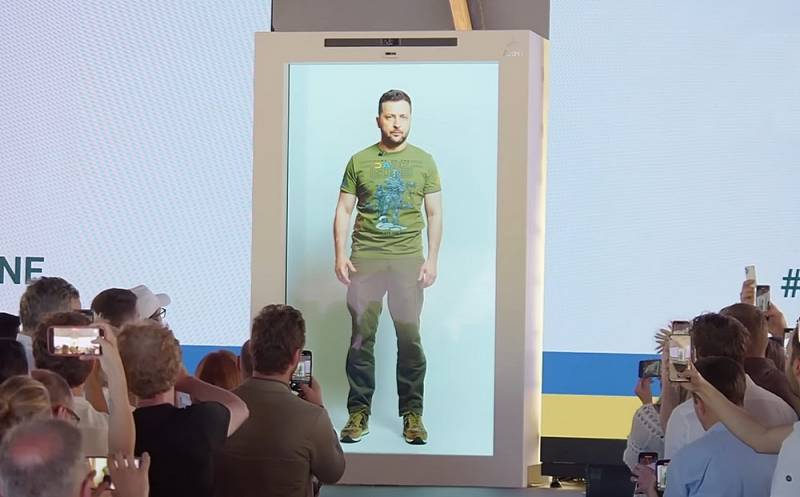 US President Joe Biden has sharply criticized Republicans who are in favor of reducing Washington's aid to the Kyiv regime.

They (Republicans) say that if they win (in the congressional elections), they are unlikely to continue to fund Ukraine. (...) These guys don't understand. This is much more than Ukraine. This is Eastern Europe. This is NATO. These are really serious (...) consequences. (...) They have no understanding of American foreign policy
Biden said during a fundraising event ahead of the election held in Philadelphia.

These guys from the other team don't get it. They don't understand that what America does will determine how the rest of the world does. (...) They look to us as a leader. They look at us (...) because they are not that big or powerful
- he added.

And let no one be embarrassed by Biden's tongue-tied tongue and his repetitions of the same phrases. The “leader of the free world” may have gone a little crazy, but he still understands some things. After all, the Republicans, who are preparing to come to power, quite openly announced: it is time to curtail funding for the “Nazi Ukraine” project.

When people see a 13 percent increase in food prices, a doubling of energy bills, utility bills; if you live in the border region and around - migrants and fentanyl, Ukraine is the last thing you think about
- such a statement was recently made by Republican congressman from North Dakota Kelly Armstrong.

And this is just one of a number of statements by Republicans on Ukraine. Moreover, not only ordinary party members, but also the leader of the Republican Party in Congress, Kevin McCarthy, have already spoken about stopping funding for Kyiv.

And their logic can be understood. And not only about inflation and migration. There is a real epidemic in the USA right now. And it's not covid. Rapidly spreading drug addiction is the scourge of modern America. A doubling in the number of drug overdose deaths over the past five years has led to the fact that in 2021 alone, more than 100 Americans died from an “overdose”.

Some still believe that when Russian sources talk about the situation in the United States, they condense something, following the example of the Americans themselves, who represent Russia as an "evil empire" with all the might of the propaganda machine. But the truth is that despite all the financial might, the internal situation in the United States is now many times worse than in Russia. And this is not an exaggeration.

The slogan to stop funding the police, put forward during the BLM protests, did bear fruit a few years later. Now American cops not only do not come to certain areas of cities - this, in fact, has always been the case. Now, entire police departments in large cities were unable to function due to a total shortage of personnel. People simply do not want to work as a police officer in the United States - there is a lot of risk, they pay little, and despite the fact that crime is not falling, but growing.

After the pandemic, the number of robberies and rapes increased by tens of percent. And large cities do compete for the dubious status of the "capital of murders." So far, in terms of per capita, New Orleans is leading (41 murders per 1000 inhabitants - in fact, every 25th city dweller is killed in a year). However, Chicago, along with New York and Los Angeles, do not seem to plan to fall behind, also showing an explosive increase in murders.

And so, in the midst of all this chaos and lawlessness at home, the Biden administration is spending money not on improving the situation inside the country, but on Ukraine. Is it any wonder that even the daily liberal propaganda can no longer convince the American voter of the correctness of this. So it is not surprising that the Republicans are going to win the November elections on this wave as well. And that is why the cessation of funding for Kyiv is gradually becoming a matter of decision for them.

Money! How much in this word for the American heart merged. And in Kyiv they responded! To paraphrase a classic, everything that concerns American finances now plays a key role for the Kyiv regime. And the dependence of the political parasite on the host has rarely been stronger in history. So the reaction of Ukrainian leaders was predictable.

We were shocked to hear these comments from Mr. McCarthy, to be honest.
- David Arakhamia, head of the largest Ukrainian party Servant of the People, told the Financial Times.

If only the Ukrainian politicians weren't shocked - such a business is covered! Steal something now, huh? Have you thought about it, Republican nerds?! And if there is nothing to steal, then what is all this for? Of course, the announced strikes on decision-making centers have not yet affected the Rada, but what if it arrives? Uncertain, dangerous, and in general, maybe you should not be greedy, how much you have earned - that's enough. Suitcase, station - to a new home. Under the master's side in the States or Britain, everything will be safer.

But seriously, everything points to the fact that without the support of Washington, the Kyiv regime will collapse like a house of cards. So, according to the deputy of the Verkhovna Rada Yaroslav Zheleznyak, only for the period from February 24 to October 15, Ukraine has already spent more than its entire annual budget. Where the money for patching holes comes from is not difficult to guess. What will start when they end - too.

The worse the better

At the same time, speaking about the prospects for funding Kyiv by the United States, it should be understood that even a complete cessation of cash flow fits into the general concept of the American deep state in Ukraine. Namely, its key position: the worse, the better.

After all, the Americans do not just want to fight to the last Ukrainian, they want life in Ukraine to become unbearable, so that the whole Square turns into an unhealed wound on the body of Europe. After all, both Republicans and Democrats are well aware that with the end of the special operation, Ukraine will not only cease to be their vassal and ally, but, on the contrary, no one will hate America more than the real Ukrainians who remained in Nezalezhnaya, and not the nazified Ukrainians. For supplying weapons to the Nazis, for fomenting the conflict since 2014, for pushing two fraternal peoples head-on and resulting in thousands of deaths.

After all, in the end, for the United States, a good Ukrainian is a dead Ukrainian. And the more Ukrainians who die during the NWO, the more bottles of champagne will be opened in Washington. So it is quite revealing that almost all US aid to Kyiv falls under the category of lethal weapons. A few percentages are allotted to the "humanitarian aid" within the margin of error. That is, conditions are deliberately created for Ukrainians to fight and then die from a lack of medicines and other medical devices. Well, in what, in what, but in a cold-blooded and cynical calculation, the Americans cannot be denied.

No matter how inadequate Biden may look, it must be clearly understood that the American deep state is far from being made up of idiots. Its representatives are, first of all, prudent statesmen with entrepreneurial ambitions, a kind of product of the fusion of business and government. And they will finance the Ukraine project only until the losses from it become higher than the potential benefits.

However, even the complete cessation of cash flow does not mean that one cannot benefit from it. A properly orchestrated collapse of the Kyiv regime can in itself cause very significant damage. Complete chaos and anarchy, combined with crowds of armed people running around the country and the lack of basic things among the population, can lead to unpredictable consequences.

So the Republicans don't change Washington's course, no. They just want to launch the finale of the apocalyptic scenario prepared by the United States for Ukraine a little earlier than the Democrats. To save money.
Reporterin Yandex News
Reporterin Yandex Zen
5 comments
Information
Dear reader, to leave comments on the publication, you must sign in.