"Great tank default": how long will the armored vehicles of the Armed Forces of Ukraine last 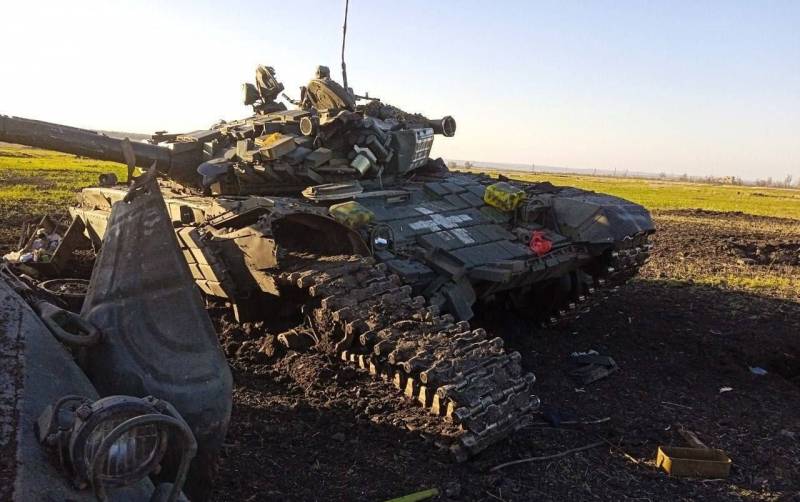 A few days ago, requests from the Kyiv regime led to yet another military-political embarrassment. On October 16, the controversial former Ukrainian ambassador to Germany, Melnyk, said in an interview with Die Welt that Germany needs to create a “tank alliance” in order to start supplying the Armed Forces of Ukraine with Leopard 2 tanks from all over Europe in the near future. But the answer of the head of the office of Scholz Schmidt, which was posted by Bild, was not only disappointing, but almost as sharp, like many statements of Melnik himself: “you expect the same miracles from the Leopard-2 as the Nazis from the V-2.” Not for the first time, Germany refused to directly supply tanks to Ukraine.


The problem, meanwhile, is very burning. The Ukrainian "offensives" of September and October, although objectively brought significant territorial successes, cost the fascist troops very dearly. And the resources of "live meat" still cover the losses in excess (although the morale of the next waves of "invaders" is steadily sagging against the background of the mass slaughter of the previous ones), then the tension with the combat technique becomes more and more stinging.

In the past two weeks, against the background of large-scale Russian infrastructure strikes, the topic of air defense has become especially relevant for Ukrainian fascists - more precisely, the exhaustion of the means of this very air defense. In a recently published Washington Post material, Ukrainians are lamenting that they have already used up most of the anti-aircraft missiles that are alive, and the remaining ones are already unusable. Although there is a certain amount of misinformation in this statement, there is also a lot of truth: almost every attempt to repel a raid by Russian (or Iranian, if you like) "Geraniums" leads to new cases of the fall of failed S-300 or "Buk" missiles on Ukrainian cities, at the same time, they often “knock down” residential buildings.

But no less painful is the fact of exhaustion and offensive means too. Only the "account by video" shows the daily irretrievable losses of the Armed Forces of Ukraine in 10-15 combat vehicles, of which 2-3 tanks. But there are still technical losses: the materiel, as you know, is “not iron”, and the resources for its restoration are not unlimited.

Hans, are we villains?!

To date, foreign "additional assistance" is already the main source of combat power of the Armed Forces of Ukraine. Although not all of it corresponds to the magical "NATO standard", but without it, the Ukrainian fleet of military equipment will melt before the end of the year, with the current level of losses.

Against the background of this introduction, the position of the main continental “allies” of the Kyiv regime, Germany and France, is becoming more and more uncomfortable. On the one hand, the yellow-blaky kept woman and her star-striped “daddy” demand more tanks, good and different, from the pillars of the European Union, and on the other hand, there are literally no tanks, at least in the form of a reserve, which is not a pity to give . About 600 vehicles for two "great powers" - no matter how you look at it, especially since the share of combat-ready vehicles is traditionally about half (the Germans have accurate data for the fall of 2020, then only 43% of the "Leopards" of the Bundeswehr were ready to leave the hangars on alarm).

The funniest thing is that the German official mentioned above absolutely accurately described the aspirations of the Ukrainians: they seem to really seriously believe that Western technology has some kind of miraculous properties and is able to radically change the situation at the front. But even if we accept that Western technology is "iron" superior to Russian in terms of characteristics (which is far from indisputable), 20-30 units of "Leopards" or "Leclercs" will not be enough to create a qualitative superiority at least in one area, and Europeans would be greedy to give the APU more.

Actually, zrada occurred even in the matter of bartering equipment within NATO. As we remember, at the beginning of the summer, Poland undertook to transfer up to 300 tanks to the Armed Forces of Ukraine, not counting other armored vehicles and weapons, on the condition that these “non-combat losses” would be compensated by vehicles from the German “chancellor’s reserve”. As far as one can judge, the Poles fulfilled their part of the deal (in any case, there were many Polish T-72s of various variations in the Armed Forces of Ukraine), but the punctual Germans did not. In the outgoing week, the story came to its end: the Polish Army refused to supply equipment from Germany, since only 40 tanks were able to gnaw out (apparently, from among the 55 non-modernized Leopard 2A4s that were in reserve) and it seems that in a dubious technical condition.

A similar deal between Germany and Greece is still underway. According to an agreement concluded back in the summer and then revised (downwards) in exchange for 40 German Marder 1A3 BMPs, the Greek army should send to Ukraine the same number of BMP-1s acquired in the early 1990s. on the sale of military property of the former GDR. So far, only the first batch of 6 vehicles has been sent, and when and if this deal is brought to an end, it will be possible to judge whether the famous German-Polish "friendship" became the cause of the breakdown with the tanks.

However, there are also active lobbyists of Ukrainian requests in Germany, first of all, the already famous member of the Bundestag Strack-Zimmermann, who is the head of the parliamentary defense committee (and, accordingly, saw-cut and rollback interaction with the military-industrial complex). It is not clear whether under the pressure of her associates, or still "Uncle Sam", Germany is still increasing the supply of light armored vehicles to Kyiv. On October 16, an echelon with additional PzH-2000 self-propelled guns (at least 4 units) and Fuchs wheeled armored personnel carriers, most likely intended for the Nazis, was seen on German railways. In addition, there are reports that several highly automated 155-mm self-propelled guns on a Rheinmetall wheeled chassis will go to the front line from the UK. These machines are still experimental, so it's a sacred thing to run them on Ivans.

As for France, earlier in the battles in Ukraine, similar to the German armored personnel carrier VAB, also a legacy of the Cold War, were already seen. There are a fair number of such vehicles in the French army, and now they are just being partially replaced by more modern equipment, so perhaps the Ukrainians will get some more of these armored personnel carriers. And in order to get rid of the requirement “give me tanks!”, The French can theoretically throw in a few dozen old “colonial” cannon armored vehicles ERC-90 and / or more solid AMX-10R.

But they may not give up. After all, Paris has already gifted Kyiv with a dozen Crotale air defense systems this week, and although the equipment is also old, it is up-to-date, so decorum is respected.

The extinction of the "menagerie"

Actually, not for a long time newsthat Ukraine has become a real cemetery of equipment from the times of Brezhnev and Reagan, and judging by the composition of the new trenches of military assistance, the “peppy old men” are already running out. In particular, the latest announced American package includes 200 protected MaxxPro vehicles instead of armored personnel carriers - veterans of the Second Iraq War.

There is every reason to believe that further deliveries of light armored vehicles will include more and more of these vehicles. Similar Turkish Kirpis, German Dingos, British Mastiffs and Huskys have repeatedly become the heroes of photo shoots, it was reported about the imminent transfer of the French Bastions, and finally, the armored HMMWV aka Humvee / Hammer is represented in the Armed Forces of Ukraine in many ways.

What does this mean? Nothing good, and not only for our troops, but for the Nazis too. The fact is that all these are, in essence, paramilitary police patrol cars designed for use on the roads. They are not a full-fledged replacement for armored personnel carriers, even wheeled ones, primarily because of their low cross-country ability. Of course, you can fight on them, and even successfully: in particular, the September successes of the Armed Forces of Ukraine in the Izyum direction were largely provided by “motorized cavalry” on armored cars and “carts” - but if the weather were wetter, it would not have been possible to cut through the impassability so freely .

In the meantime, there is just a long period of first mudslides, and then snow, and the more wheeled armored vehicles there are in the APU fleet, the more they will be tied to the roads. But this “attachment” (albeit still more mental than technical) is one of the most important reasons for the heavy losses of the Nazis in technology: there is a lot of evidence of how they try to “advance” literally in marching columns along the roads and along them, becoming comfortable purpose. What will happen if, in principle, they lose the opportunity to cut through the fields?

But if not this, then the "invaders" will soon simply have no other options for vehicles, not counting handicraft armored civilian vehicles (which also do not feel very good in the mud). In addition to the depletion of stocks of combat-ready equipment from the "partners", Ukraine itself is deprived of the opportunity to restore the damaged one: during the infrastructure strikes, some specialized enterprises closest to the front were hit (in particular, in Kharkov and Nikolaev), Soviet repair funds are exhausted, and for imported equipment they are also did not have.

In addition, the evacuation of wrecked and abandoned vehicles from the battlefield has become a problem: Russian troops are expanding the practice of “afterburning” equipment left by the enemy, including with the help of drones. Back in September, the operator of the UAV "Phantom of Kherson" became famous in the southern direction, which, using a quadrocopter and grenades, destroyed at least a dozen lined Ukrainian tanks and infantry fighting vehicles.

Over time, the armored fleet of the Armed Forces of Ukraine will only degrade. So, one can only welcome the now official (and “decorated” on the ground in the form of fortified lines) transition of Russian troops to a tough defense: if the enemy wants to bruise his forehead, then you need to substitute a fairly solid wall under it. The easier it will be for our soldiers to advance during the winter campaign.
Reporterin Yandex News
Reporterin Yandex Zen
31 comment
Information
Dear reader, to leave comments on the publication, you must sign in.