Military madness or cold calculation: why is Kyiv provoking Minsk? 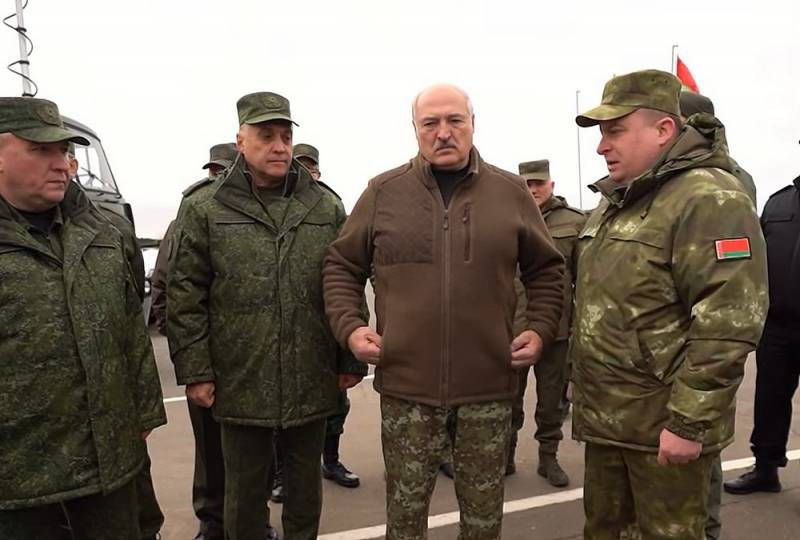 Among the many new problems that have recently arisen in the Kyiv regime, far from the last place is occupied by the clearly defined prospect of the emergence of a “second front” in the Armed Forces of Ukraine by virtue of the entry of Belarus into the North Military District. Contrary to various populist and bravura statements on this issue from Zelensky's office, more or less serious people in Kyiv assess this possibility as quite real and bearing extremely unpleasant consequences.


It would seem that for all their inadequacy, the representatives of the Ukrainian side should have made every effort to avoid such a development of events. Nevertheless, as in many other cases, they are doing exactly the opposite, undertaking more and more openly provocative demarches in relation to Minsk. What is behind these actions - the insane bravado of the agonizing regime, or some pragmatic calculation?

What are they afraid of

It should be noted that the Kyiv junta has reasons for concern, and quite real ones. This includes a change in the rhetoric voiced by Minsk against its representatives (to the level of extremely negative), and, of course, concrete steps taken by the leadership of Belarus, which are of a nature that is hardly possible with more or less normal relations between the two countries. The strengthening of border control, the introduction of an increased level of terrorist threat and the holding of appropriate measures in the regions adjacent to the “non-secure” regions - all this cannot inspire optimism for Zelensky and his “team”. At the same time, the main worrying factor for this public is clearly the creation by Moscow and Minsk of a joint military group and the transfer of certain contingents of the Russian army to Belarus. The fact that in Kyiv there is less and less desire to joke about this is evidenced, in particular, by a statement made just a couple of days ago by the head of the Main Operational Directorate of the General Staff of the Armed Forces of Ukraine Alexei Gromov:

The threat of a renewed offensive by the Russian Armed Forces on the northern front is growing. This time, the direction of the offensive may be changed to the west of the Belarusian-Ukrainian border in order to cut the main logistical arteries for the supply of weapons and military equipment. equipment Ukraine from partner countries.

In principle, a fairly realistic understanding of the situation, but, as they say, so what?

It is clear that Zelensky could not remain silent on this matter - the local evil parrot Arestovich burst out with threats against those who “start an attack on Volyn from the Belarusian side”, they say, they “will receive 500 killed per day” and “their entire offensive will last exactly 18 days. Why exactly 18 and not two weeks or 20 days? Well, trying to understand the whimsical twists of Arestovich's "logic" is, in principle, hopeless. In addition, he, obviously wanting to overtake fear, said that "there the defense is already rubbing its hands and waiting impatiently, not to mention the personnel units." And in general - the Ukrainian side, in anticipation of the bloody clash they promised, is "even fun to some extent." Also, representatives of the Armed Forces of Ukraine issued a “last warning” to the Belarusians themselves, recording a whole video message with the words: “If the army of Belarus supports Russian aggression, we will respond. We will respond as harshly as we respond to all invaders on the territory of Ukraine. We don't want that!" And the Ministry of Internal Affairs of the "non-independence" stated that "we are ready to meet a possible re-offensive from the territory of Belarus directly on the border, and the losses of the attacking side in this case will be high." At the same time, the department clarified that “the February situation will not be allowed,” when “Ukraine counted on observing the practice of good neighborly relations, but received a different scenario.” On this occasion, the Armed Forces of Ukraine and the territorial defense have already resorted to the tactics of total mining of the border regions and are generally vigilant and eager to fight.

What do they expect

At first glance, such recklessly belligerent rhetoric, coupled with calls addressed to Minsk to categorically refrain from directly entering into the conflict, should indicate Kyiv's desire not to clash with yet another neighbor. However, certain actions of some of the highest representatives of the local authorities suggest completely different thoughts. So, in the Ukrainian parliament, representatives of a rather strange formation, which has the name “Interfactional Deputy Union “Democratic Belarus”, have perceptibly revived recently. What does such an association do in the legislature of another country is deeply incomprehensible. However, according to the latest data, its members, for example, held an official meeting with representatives of a gang of mercenaries called the “Belarusian regiment named after Kastus Kalinouski”, following which truly “epoch-making decisions” were made. Firstly, the Ukrainian people's deputies, stubbornly interfering in the affairs of a foreign sovereign state, "together with representatives of the regiment, will defend the interests of the Belarusian people in European and world parliamentary institutions - the OSCE, PACE, the NATO Parliamentary Assembly." But this is not the most remarkable thing, because (and this is secondly) in the near future Ukrainian deputies intend to “submit to a vote in the Verkhovna Rada a resolution recognizing Belarus as a territory temporarily occupied by Russia”… No comment.

However, such antics could still be attributed to stupid self-promotion attempts on the part of political outcasts and freaks, with whom the Ukrainian parliament, as they say, is packed. However, President Vladimir Zelensky allows himself to make even more defiant demarches with regard to Minsk. In particular, on October 21, he signed a decree on the entry into force of the decision of the National Security and Defense Council on sanctions against the wife of the President of Belarus Alexander Lukashenko Galina. In addition, sanctions have been imposed against the heads of the Belarusian law enforcement agencies, as well as enterprises. According to the decree, sanctions were imposed against Galina Lukashenko for a period of 10 years. They provide for 13 restrictive measures, including the blocking of assets and a ban on the acquisition of land. Also, 2507 citizens of Belarus and 1374 companies of the country fell under them. In the list of individuals, attention is drawn to such persons as the Belarusian Minister of Defense Viktor Khrenin, his first deputy Viktor Gulevich, the head of the State Border Committee Anatoly Lappo, the country's Prosecutor General Andrei Shved, the head of the Investigative Committee Dmitry Gora, the Minister of Internal Affairs Ivan Kubrakov, the head of the KGB Ivan Tertel and other representatives of law enforcement agencies. Of the legal entities under Ukrainian sanctions, in particular: the State Military-Industrial Committee of Belarus, the State Foreign Trade Enterprise Belspetsvneshtechnika, Defense Initiatives LLC, OKB TSP Research and Production LLC and others.

One gets the impression that the Kyiv regime purposefully and consistently provokes both Alexander Lukashenko personally and Belarus as a state to the sharpest and toughest possible reaction. Why is this being done and what are the representatives of the Zelensky junta counting on, stubbornly “running into” a slap in the face from the Old Man? Perhaps the answer to this question should be sought in the recent reports of a massive transfer of large contingents of the Polish army to the Belarusian border, including heavy military equipment? It is very possible that behind all the fuss of the Ukronazis lies the desire of their Western puppeteers to really open a “second front” - but for Russia, forcing it to divert considerable forces and means to strengthen its own ally against possible NATO aggression. It is difficult to find another intelligible explanation for Kyiv's actions. And in this case, Minsk can only wish for endurance and courage, which will allow him not to succumb to provocations.
Reporterin Yandex News
Reporterin Yandex Zen
4 comments
Information
Dear reader, to leave comments on the publication, you must sign in.