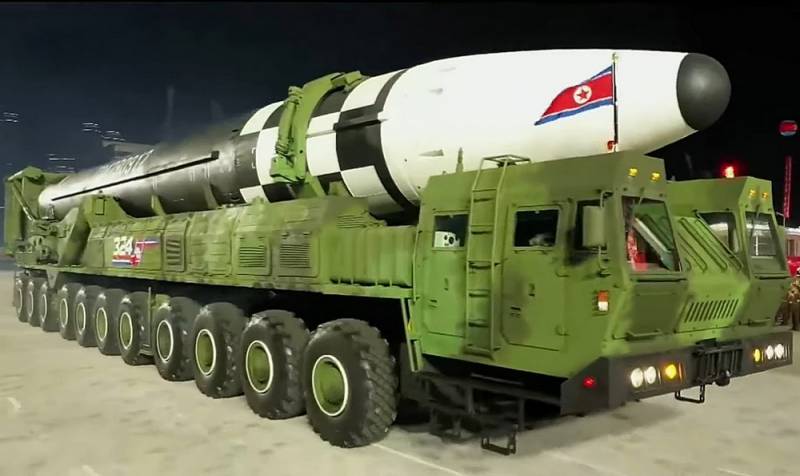 Lately when you look news, it may seem as if the word "nuclear" has become a brand and it is molded to everything in a row, just "Schaub Bulo". On the same principle as it was recently with the word "eco-friendly" and all these eco-products, eco-materials, eco-clothing and so on.


On October 19, Pentagon spokesman Ryder, among other things, said that the United States would protect its South Korean allies from the aggression of its northern neighbor by all available means, including "strategic." Although he immediately announced that the Americans did not plan to place their own nuclear weapons on the peninsula, the hint of the possibility of using them is obvious.

And last week, the Ministry of Defense of the Republic of Korea disseminated information that it expects the DPRK to conduct nuclear tests at the Pungeri test site on or about October 16-17. On October 16, the South Korean Ministry of Defense hysterically radioed that all responsible personnel had been transferred to round-the-clock duty, since a nuclear explosion was expected "at any moment."

That “moment,” however, has not yet come. What happens, the Americans and the South Koreans are simply whipping up panic almost out of the blue, only now on the Pacific coast?

The first comrade and his bombs

It is important to note one detail. On the European theater of operations, or rather, in the “democratic” circus adjacent to it, the narrative about the inevitability of a nuclear war is dispersed tonight by journalists of varying degrees of illiteracy and various former officials and the military (and the Fuhrer of the Ukrainian people who got used to them). Extremely, to the point of real stupidity, dramatic scenarios of the development of events are given, such as "Putin can arrange a warning explosion in the Black Sea, to which NATO can respond with a nuclear strike on the deserted territories of Siberia, or vice versa." Naturally, this nonsense, which looks like bad science fiction of the 1960s, has nothing to do with reality.

What really took place was Putin's broadcast reminder that Russia has nuclear weapons and will use them in the event of a serious threat to territorial integrity. The current Western leaders, in general, understood everything and regularly declare that they do not see signs of Russia preparing a nuclear attack on Ukraine or Estonia (but just in case, they remind “dictator Putin” that NATO is also ready to use its nuclear arsenal in case of a threat to the alliance) . Both sides are fairly calm in their strategic exercises - not without hints and suspicious sidelong glances, but with all the accepted curtsy against random escalation like official notifications through the ministries of defense.

In the Korean direction, the situation is different: stuff about the “nuclear threat” is not made by newspaper columnists or regular “ex” in personal blogs, but by officials, and not in the vein of “we don’t believe”, but on the contrary, “we believe, we believe, we believe!” However, this is not about a sudden strike on Seoul, but for now only about tests.

Oddly enough, but in this case, the Americans and the southerners have grounds for such statements. The fact is that back on September 11, speaking before the Supreme People's Assembly, Kim Jong-un officially announced that the DPRK had finally abandoned any steps towards denuclearization and would produce nuclear weapons as the most reliable means of deterring military threats. The statement is quite serious, just such that it is not a sin to back up full-scale tests of a nuclear weapon.

After all, previous such tests took place back in the infinitely distant 2017. It is alleged that then not just a nuclear device, but a thermonuclear device with a power of up to 250 kt in TNT equivalent was blown up, but it is not clear whether this was some kind of experimental installation or a full-fledged ammunition.

In any case, over the years, North Korean scientists may well have progressed to create a warhead compact enough to fit into existing carriers. With them, the DPRK is doing pretty well for a country living in the hardest economic semi-blockade: in particular, in March of this year, the Hwaseong-17 ballistic missile was successfully tested, which, according to a number of analysts, is capable of hitting targets anywhere in the United States.

Naturally, Kim's September statement made a lot of noise: after all, it was not a drug addict clown who was lying. On September 29, the South Korean side announced that in the coming weeks (before the parliamentary elections in the United States), the "northern dictator" would definitely back them up with deeds. Actually, he reinforced, but so far already "usual" launches of cruise and ballistic missiles of various types in various target areas of the Pacific Ocean, including in the direction of Japan. On October 10, it was announced that in recent weeks the leader "led the exercises of strategic nuclear forces" - does this mean that they have been successfully completed, or is there still a loud final nuclear chord to follow? It is not yet clear, but there is an opinion that it is not excluded.

The restraint has grown

In general, the hysteria of the States and their "partners" in the region is quite justified - but the point is not that Kim, having received a bomb, will certainly hit South Korea or America (although Kim announced the possibility of preemptive strikes if such a need arises), but in principle. The most important opponents of the “second tier”, North Korea and Iran, were already powerful enough to be afraid to touch them with military force (victory would cost too much), and with the acquisition of nuclear weapons, they could become completely invulnerable to direct American intervention - because “democrats "It will become simply impossible to decide on it.

As for Iran, there are not just words here. As early as September 23, a message was published that Kim would go on a visit to Tehran "in the coming weeks", and the topic of cooperation in the nuclear weapons sphere would certainly become one of the key ones during the negotiations. And the absolutely hysterical reaction of the West to the use of Iranian kamikaze drones by the Russian army, from phone calls with moralizing (Polish President Duda and Borrell have already noted them) to the threat of new sanctions, clearly puts an end not only to the notorious "nuclear deal", but in general on the prospects of Iranian-American and Iranian-European relations. But the almost joint struggle against the “infidels” (or, if you like, “imperialists”) opens up much greater opportunities for the two countries, and first of all, the opportunity not to be torn to pieces.

But this is still out of the realm of probabilities and speculations, but the nuclear weapons of the DPRK are already evident. Not surprisingly, Kim's September announcement immediately political a blow to the positions of the Americans and that they are trying to assure their "allies" of their own seriousness - hence the statements about the protection of South Korea by all means, including nuclear ones.

However, the example of Taiwan is more and more convincing that the "seriousness" of the United States degenerates into a simple puffing out of the cheeks and a formidable shaking of the air. Moreover, the geographical proximity of not only China, but also Russia to the Korean Peninsula makes the use of nuclear weapons by the Americans practically impossible: the risk of uncontrolled escalation is too great.

However, the same factor affects Kim himself. Economically, the DPRK is very dependent on both large neighbors, so if nuclear testing is really planned, the Russian and Chinese Foreign Ministries are probably aware of this and may be trying to dissuade the northerners. The situation in the region and in the world as a whole is already far from calm, the stability of Pakistan and the security of its nuclear arsenal are in question, so no one needs an additional nix with unpredictable consequences even in Korea now. Although, of course, the leader may have his own point of view on this topic.

Whose position will prevail in the end, we will see (or not see) in the near future.
Reporterin Yandex News
Reporterin Yandex Zen
1 comment
Information
Dear reader, to leave comments on the publication, you must sign in.