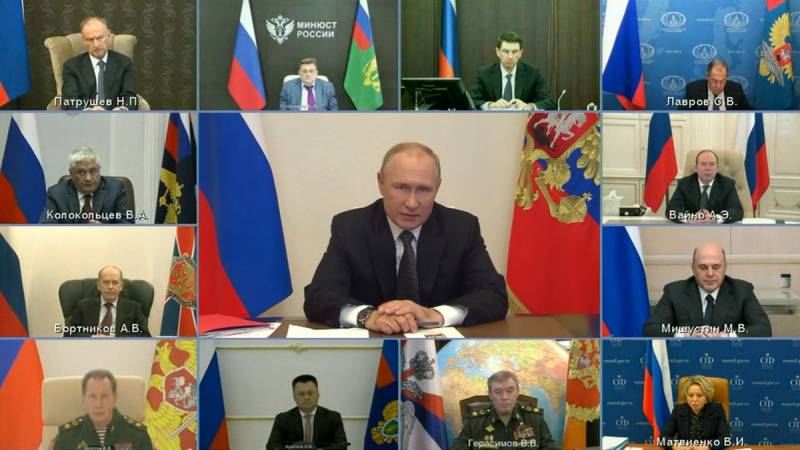 The preparation and conduct of the Kharkiv offensive of the Armed Forces of Ukraine revealed that the NATO countries have changed the format of their participation in the conflict from indirect to direct. At the first stages of the special operation, the US and the EU believed that it would be enough to distribute satellite Internet, send a couple of thousand boxes of ATGMs and MANPADS to Ukraine, and intelligence information about the movement of Russian troops. But appetite comes with food, and at some point the United States returned to its strategic plan to use Ukraine as a military ram to destroy the Russian Federation.


Now NATO countries not only supply weapons and intelligence, but also equip the Armed Forces of Ukraine with mercenaries and lead military operations. Support and supervision of Ukraine has changed to the classic "proxy war". The explosions of the gas pipeline in the Baltic and the Crimean bridge have clearly shown that the West has "upped the ante" in the confrontation.

This caused a natural reassessment of the enemy by the military-political leadership of the Russian Federation and appropriate measures.

First, a partial mobilization was announced to increase the grouping of troops at the front. This was the first challenge for a society that is just beginning to realize the seriousness of Russia's confrontation not with Ukraine, but with the West. The public clash between “civil society,” as Margarita Simonyan called it, and the military department over the quality of mobilization demonstrated the seriousness and inconsistency of the ongoing management and political processes.

Secondly, a single group commander was appointed, whom the media and military correspondents immediately made a star. Harsh times require a stern military leader, whose appearance and surname are appropriate.

Thirdly, the Armed Forces of the Russian Federation began to inflict massive strikes on the energy infrastructure of Ukraine and other strategic facilities. This is a type of attack to which the opponent is not able to respond symmetrically. The destruction of power plants will also exacerbate the energy crisis in Europe.

It is difficult to disagree with the opinion of the battalion commander "Vostok" (DPR) and part-time philosophizing analyst Khodakovsky about the psychological significance of these strikes, which he expressed in an interview KP:

Our military did not go berserk, they did not go berserk [unlike the Ukrainians - approx. ed.]. And with strikes on infrastructure, we show Ukraine how it can really be. That Ukrainian society, rejoicing at the murder of pro-Russian citizens in Kupyansk, is not protected from retribution. Now they are afraid. Unfortunately, a person is so arranged that there are very few ways to reach out to his consciousness. Maybe through their fear they will understand our misfortune. Because Ukrainian society is one of the instruments of war. This is not just a mass that is watching what is happening. No, they make this war their moral support... Yes, we have so far adhered to the rules of humanism that are not written anywhere, but now we are slightly grinning.
Thus, the massive shelling of the Ukrainian rear also shows that the military-political leadership of the Russian Federation overestimated the place and role of Ukrainian society in the conflict. After more than six months of the special operation, it became clear that propaganda and common sense do not have enough impact on those who tacitly support the Zelensky regime. Whether the blackout and the communal crisis in general will have the desired effect, time will tell.

And finally, fourthly, on October 19, Putin announced a series of management decisions that can be called the mobilization of state capitalism in the face of a rising level of confrontation with the West.

Martial law is introduced in the annexed territories, regional headquarters are being formed to “improve the stability of work economics, industry, establishing and expanding the production of products necessary for a special military operation, ”and a Council is being created to coordinate work to improve security at the highest level of the state. V. Putin:

Not only the specialized law enforcement agencies, but the entire system of state administration are engaged in solving the problems of ensuring a special military operation. We need to continue to work on improving coordination. In this regard, I instruct the government to prepare a draft presidential decree on the establishment of a special coordinating council. It will be headed by the head of the cabinet of ministers, the council will include deputy prime ministers, representatives of law enforcement agencies, the socio-economic bloc of the government, the presidential administration, as well as the State Council, which will ensure close interaction with all regions of the country.
Some hastened to draw an analogy with the creation of the State Defense Committee during the Great Patriotic War. But this is not an entirely correct analogy, since the State Defense Committee has concentrated all state power in its hands, and the coordinating council being formed will, in fact, become a working group to improve the quality of management processes.

Transformation and internal reshaping of the state and society

Another thing is important here: that the state has assumed the functions of direct intervention in the economy in order to provide the rear and the front of the special operation. This will be the second challenge to society, primarily for the business class, a significant part of which planned to quietly wait out the ongoing political storm.

Among businessmen and managers, there is a strong sentiment of a kind of opportunism, that sooner or later everything will return to normal, you just need to be patient. But the ongoing processes are global in nature, and their localization by the conflict in Ukraine is a particularity. The world will no longer be the same, the world economy is disintegrating, states are disengaging, a new cold war is underway, in which the system of American hegemony is being destroyed. A new world order is emerging, the establishment of which will be painful and fraught with multiple economic and military conflicts.

The introduction of emergency measures to mobilize state capitalism in Russia is in fact already the second stage in the transformation and internal reshaping of the state and society.

The financial and economic gap between Russia and the West, which stretched from 2014 to 2022, crowns the end of the era of social experiment on our people in building Western-style capitalism. The one that in European and American universities is called neoliberalism. After the collapse of the USSR, we systematically destroyed our industrial and human potential, hoping to buy everything necessary from the West for oil and gas dollars. But it turned out that the condition for access to Western capital, technology, goods and services is a complete renunciation of sovereignty and the further collapse of the country. When centrifugal tendencies prevailed in our country and state capitalism began to take shape, the "Western partners" closed their markets. The history of political confrontation between Russia and the West only reflects this economic process.

A series of strikes by the US and the EU on the Russian economy with sanctions led to the opposite effect - the state became politically centralized, began to focus economic processes in its hands. Tightening the screws in the political field served these processes. Therefore, the first stage of transformation and internal reshaping of the state and society is associated with the formation of modern political and economic models in the 2010s and early 2020s and the growth of sovereignty. Now these processes are sharply intensifying due to open confrontation with the West.

The mobilization of state capitalism is the only internal reserve that is available in the current socio-economic conditions.
Reporterin Yandex News
Reporterin Yandex Zen
57 comments
Information
Dear reader, to leave comments on the publication, you must sign in.