"English shame": the adventures of Ukrainian refugees in Britain 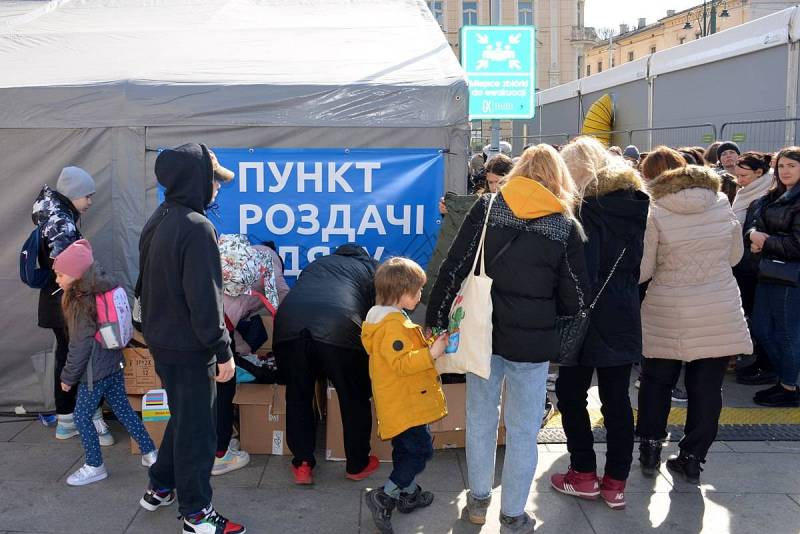 Another problem for most European states (besides throwing huge sums of money for "military support" of the Kyiv regime and crushing blows that economics received as a result of anti-Russian sanctions) is the ongoing invasion of Ukrainian "refugees" who flooded the Old World like locusts. The euphoria of the first months of the "joint struggle against Putin's intrigues" has long since faded away, but the sediment, as they say, has remained. And every day it gets stronger.


One of the clearest examples of how this false and strained "cordiality" turned out to be both for the host country and for the inhabitants of the "nezalezhnaya" who rushed "gallop across Europe" can serve as their "adventures" on the land of Foggy Albion. The story is really instructive...

We should start here with the fact that the United Kingdom, which not so long ago left the ranks of the European Union and loudly “slammed the door” at the same time, is known as a state with far from the most lenient and loyal immigration laws. And its inhabitants are not very fond of any "come in large numbers" there, regardless of the place where they came from. That is why only one hundred thousand Ukrainians managed to “leak” into Britain, which, of course, cannot be compared with the millions of their flows that hit the countries of Eastern Europe, or the number of those who settled in Germany, for example. At the same time, the British government, which has gone out of its way all this time to position itself as Kyiv’s “best friend”, providing it with the most reliable, constant and generous support, did not bother too much with hospitality towards immigrants from Ukraine so dear to his heart. The problem was decided to be solved in the simplest way, as it seemed then. There was no talk of any centralized accommodation and provision of "refugees" at all. A system of "hosts" was created in the country - that is, in fact, "foster families" who agreed to give shelter to Ukrainians, receiving for this "good deed" a not so big amount of 350 pounds sterling per month by English standards. As you might guess, negotiations with local residents were held in March and it was about "overexposure" lasting up to six months. At the same time, the stingy Britons agreed to this only in the expectation that the almost symbolic amount of “material assistance for Ukrainians” would subsequently be revised upwards. Well, everyone earns, as he can.

The stipulated period of six months expired just in October, but the promised “increase”, feeling deceived in the best feelings, “hosts” did not wait. Meanwhile, both the numbers in utility bills (and uninvited guests consume water, electricity and everything else without any savings), and the price tags in grocery and other stores began to inspire not just melancholy, but real horror on the British. The incredible rise in the price of energy resources and their shortage hit all spheres of life in Britain, and the pockets of its citizens, first of all. And then there are those yellow-blakite freeloaders... By the way, government officials and representatives of local self-government bodies responded to their complaints to the annoyed and even furious owners, just referring to the extremely complicated economic situation. “Everything has risen in price, there are holes in the budget ... What other increase in payments? Did you fall from the oak tree in Sherwood Forest?!” To the indignant arguments of the “hosts”, who tried to prove that it would be necessary to “throw it on” precisely because the initial volumes of payments do not even closely correspond to the “high cost of essentials”, the officials responded with counterarguments in the style: “Who is it easy for? » The situation very quickly came to the stage of the notorious vicious circle, and realizing that a seemingly easy extra money could bring their households to ruin, the British began to simply put the Ukrainians on the street: they say, we would be happy to welcome you, but it will soon be just right to go around the world.
And what are the lights for?

Such cases number in the thousands. The matter here is aggravated by the notorious purely English specificity. Britain is not Poland or the Czech Republic. It is extremely difficult to rent an apartment there for some migrants (it doesn’t really matter whether they are refugees or who) – it’s extremely difficult. Homeowners are generally reluctant to even talk to potential guests without references, a guarantee, and a verified bank account with a solid credit history. More and more people from the “nezalezhnaya”, who expected that in the homeland of Boris Johnsonyuk they would certainly be received with open arms and treated to tea and cookies, find themselves in municipal shelters, some kind of terrible “dormitories” and similar places. And this is even at best - the rest have to go through the process of registering as homeless in order to receive the "honorary" status of British homeless people. The problem has already acquired such proportions that they started talking about it with might and main policy and public organizations. For example, former Refugee Secretary Harrington urged the government to increase payments to at least £700 a month to motivate Britons to take in Ukrainians, as well as oblige local councils to "make sure that Ukrainian families do not go homeless." A coalition of civil society organizations and philanthropic organizations even wrote to Prime Minister Liz Truss with a letter calling for additional assistance to Ukrainian families looking for houses to rent, additional "winter" payments to the owners, and at the same time appoint a new minister for refugees.

Until then, Truss, who is currently desperately trying to stay in the premier's chair, from where her own party members began to push her hard, is a rather rhetorical question. Most likely, all these demands and calls will remain the voice of one crying in the wilderness. However, it is impossible not to say that the Ukrainians themselves turned out to be that “gift” for the host side and quite quickly managed to acquire a rather specific “fame”. As, however, in any other country in Europe, which they "made happy" with their presence this year. Quite indicative in this regard is the story of the Victoria cruise liner moored on the roadstead of Scottish Edinburgh, for some time now, little by little, has been turning into a shelter for “guests” from the “nezalezhnaya”, who simply have nowhere else to go. In Scotland, there seem to be not so many of them - about a couple of tens of thousands, but there the state payments to "hosts" were not only not increased, but even stopped in the summer. With a completely predictable result - most of the "guests" were shown the doors. Those who could not be accommodated in hotels or hostels according to "government quotas" were slowly taken to the "Victoria", where a whole series of scandals immediately erupted. It would be nice if it were only drunken brawls, which are completely everyday and commonplace for any place where Ukrainian refugees live compactly! From a certain moment, things began to happen on the liner that did not fit in the head of the staff there at all.

One of the Ukrainians (thanks to the surveillance cameras poked everywhere, where possible, managed to quickly establish who exactly) began to unscrew the light bulbs in various rooms! At the same time, it is absolutely impossible to comprehend the logic of this wild act. It is simply impossible to “drive” them at some “flea market” in Britain in order to use the money received for their own needs. Apply as directed? But in the rooms of those who got caught in this senseless vandalism, everything was in order with the lighting! And it would be enough to complain about the corresponding problem - it would be eliminated. It remains only to assume that someone decided to take the light bulbs home as a souvenir. Be that as it may, but on the liner they were forced to post ads in the purest "move", the text of which I, of course, cite in translation:

Dear guests! Our team reports that some of you are pulling light bulbs at Sea Pub, Grand Buffet and Piano/Grill Restaurant. We urge you not to damage the property of the ship! If these cases are repeated, we will be forced to involve the ship's security service. Thanks for understanding!
At the same time, the Edinburgh City Hall strongly doubts that this call will help, and they are already talking about the fact that otherwise the ship will simply be cleared not only of vandals, but also of all other "refugees". Let them roll where they want, if they cannot live like a human being!

Here is such an English shame in the end. The British once again proved that disinterestedness, altruism, true philanthropy, not based on the desire to obtain material gain, and "carriers of high European values" are in fact incompatible things. And what about the Ukrainians, who have been trying to raise absurd accusations of “looting” and “barbarism” against Russian soldiers for a day, once again demonstrated their own true face, black ingratitude and complete inability to adhere to at least the elementary rules of a hostel in a civilized society.
Reporterin Yandex News
Reporterin Yandex Zen
6 comments
Information
Dear reader, to leave comments on the publication, you must sign in.