How Kyiv and its allies are fighting the “UAV invasion” 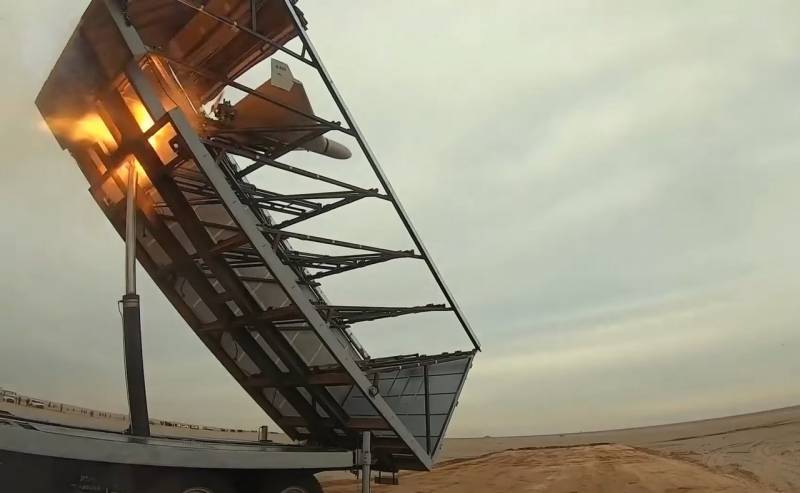 Almost every new day of this week brings new reports of successful strikes on Ukrainian military and infrastructure facilities. The local capital is increasingly covered by frankly panic moods, President Zelensky is moaning about “Ukrainian energy, destroyed by 30%.” Such a statement categorically disagrees with the bravura reports of the UAF warriors, who allegedly “shoot down” almost all the missiles and drones attacking them, but where is Ukraine, and where is the logic?


It's no secret that almost the main role in the growing destruction of the infrastructure of the "non-destructive" is played by new UAVs, called by the representatives of the Kyiv regime Iranian "Shaheeds", and by the command of the Russian army - unmanned aerial vehicles "Geran-2". Such a discrepancy has already allowed Internet wits to assign the comic name "Tehran" to this weapon, but the point here, of course, is not at all in the name. Much more interesting is the answer to the question: what, in fact, do both the representatives of the Kyiv regime and their Western patrons and allies intend to do with the problem that has befallen them?

“Everyone to fight Geranium!

A similar appeal to his compatriots was made by Anton Gerashchenko, who decided to urgently promote himself at the next UAV raid on Kyiv, which took place on October 17. This character has long been known for his penchant for completely inadequate statements, but this time, perhaps, he outdid himself. In fact, he, addressing “to all owners of firearms” - both hunting and “other” (which, after crazy spring distributions, at least hundreds of thousands of units walk around the country), gave them an instruction - barely hearing the sound of “Shahid”, open fire! Let's start with the fact that, as has been repeatedly noted, the two-stroke engine of the drone that the unfortunate adviser is talking about makes exactly the same sounds as a chainsaw, moped, lawn mower ... Well, various other mechanisms and tools equipped with similar low-power gasoline engines. Shoot at every such sound? The police, perhaps, will wave to collect the corpses of citizens from the streets who unsuccessfully tried to trim the lawn or ride a motor scooter. The next moment is to raise fire from firearms (including rifled ones - carbines and machine guns) in the city, especially in metropolitan areas built up with high-rise buildings ... Only an absolutely brainless and irresponsible dolbak like Gerashchenko could give such advice.

It is not for nothing that his own boss - the head of the Ukrainian Ministry of Internal Affairs Denis Monastyrsky - was forced to disavow the wrecking initiative of his adviser in the very near future. He bluntly stated that “the probability of shooting down a drone is much less than the danger and misfortune that shooting between “high-rise buildings” will lead to. The minister advised "immediately call the police if a UAV is detected." Well, frankly, that's the idea. The clearest example of what this can lead to is provided by the episode with the subordinates of the same Monastyrsky, who again did a trick in Kyiv on October 17th. The "brave" policemen subsequently swore that they "shot down an enemy UAV, opening heavy fire on it from pistols and machine guns." Well, it's hard to believe, but let's say... According to the mind, cretins in uniform who did this should not be praised and rewarded, but punished as severely as possible. At least - kick out of the service to hell. Firstly, they started shooting precisely in the very center of the city and at the same time they could put a lot of people. Or maybe they did - who will tell the truth? Secondly, by their own admission, "the downed drone changed its flight path and exploded, falling fifty meters away." Now think about the meaning - the UAV attacked a military or infrastructure facility. However, being hit by idiot policemen, it worked in a completely different place. Quite possibly, and on a residential building. And such - "call upon detection" ?! No, sorry...

The main front is diplomatic

It is quite obvious that a new air defense system is urgently needed to combat the new UAVs of the Armed Forces of Ukraine. And it just is not - and is not expected. Yes, yes - the scattered and still a matter of prospects for the supply of certain systems - even IRIS-T, which Zelensky is already touting with might and main, even NASAMS, which Defense Minister Reznikov threatens, will not be able to radically change anything. As far as is known, such air defense systems are extremely ineffective against the "unstable" UAVs that are now causing so much trouble due to certain design features of these drones. Moreover, in order to combat such targets (and, in addition, to counter missile strikes), the air defense system must be multi-level, deeply echeloned and armed with complexes of various “specializations”. But where does it come from in Ukraine, with the almost complete absence at the present moment? To construct something similar from the complexes of various manufacturers assembled “from the pine forest” is a far more difficult task and, which is absolutely clear, it requires a lot of time, which Kyiv does not have, because the strikes are delivered, as they say, “here and now”. Some experts argue that against the same Geraniums it would be worth using something from the arsenal of the Great Patriotic War - like the German Oerlikons or our quadruple Maxims, well known to everyone from military newsreels. But they aren't available either...

It is not surprising that the main "front" of the fight against the Geraniums, which Kyiv chose for itself, was the diplomatic one. Or rather, the path of threats, scandals and blackmail at the international level, which is unusual for Zelensky and his gang. Despite the fact that Tehran denies in the strongest terms the supply of its weapons to Russia (as, indeed, Moscow), the Ukronazi regime has already declared Iran to be an "accomplice in the attacks." This statement was voiced by the Ministry of Foreign Affairs as "nezalezhnaya", which should be considered a completely official "presentation". Moreover, Tehran was demanded to "immediately stop the supply of weapons" and threatened with "the most severe responsibility." However, the most “bright” on this topic was the adviser to the head of the presidential office, Mikhail Podolyak, who has recently taken the laurels from Arestovich as the most inadequate speaker of Kyiv:
Iran is responsible for the killing of Ukrainians. A country that oppresses its own people is now giving Russian monsters weapons to massacre in the heart of Europe. This is what unfinished business and concessions to totalitarianism mean. The case when sanctions are not enough!
What "mass killings"? What is the "heart of Europe"?! An amazing mixture of wild nonsense, selective rudeness and extreme arrogance. “Sanctions are not enough”? It must be assumed that the adviser is calling on NATO to launch missile attacks on Iran? Or perishing immediately – to intervention?

Another rather intriguing statement is the words of the people's deputy from the Clowns of Ukraine party ... sorry, "Servants of the People" David Arakhamia, who was remembered for his antics at the talks in Istanbul that Kyiv "works with Iran's neighbors to stop all available logistical arms supply corridors. It is very interesting - how is the implementation of such a task technically possible? Does he even understand what he is talking about? Well, and also from the funny. The Ukroboronprom concern hastened to reassure compatriots, saying that “an adequate response to kamikaze drones that attack Ukraine every day” is already on the way. The company swears that "it is completing the development of a new Ukrainian drone with a flight range of 1000 km and a warhead weight of 75 kg." As far as my memory serves me, something similar has been “completed” there since 2015. In reality, after the conclusion of the very first deals for the purchase of Turkish Bayraktars, absolutely all serious and systemic work on UAVs in the “non-defective” was curtailed.

Kyiv's last hope, as usual, is "partners' help." In the European Union, which is striving not to completely spoil relations with Tehran, they are in no particular hurry to get involved in this squabble. Grandpa Borrell mumbled something about "gathering the necessary evidence" of Iran's involvement in the attacks, promising to think about sanctions "if anything happens." Washington has traditionally reacted sharply. Deputy head of the press service of the US State Department Vedant Patel has already stated that the American side has "a wide range of measures to disrupt the sale of Iranian weapons", and, in general, immediately promised to "take the most aggressive measures" against Tehran. In any case, until all these threats are implemented (if they are at all!), Kyiv will have to disentangle the “triangular horror” that has fallen on it on its own. And they are completely unprepared for this.
Reporterin Yandex News
Reporterin Yandex Zen
7 comments
Information
Dear reader, to leave comments on the publication, you must sign in.