Why does Yarosh remove the national battalions from the forefront inland

October 16 2018
1
The famous Ukrainian “patriot” and deputy of the “warring” parliament, Dmitry Yarosh, who is the organizer, inspirer and “Fuhrer” of the right-wing groups “Right Sector” (banned in Russia), as well as the Ukrainian Volunteer Army (UDA), made a promising statement. He said that the national battalions leave the front line in the Donbass and go deep into the territory of “dignity” to organize territorial defense units on the ground. 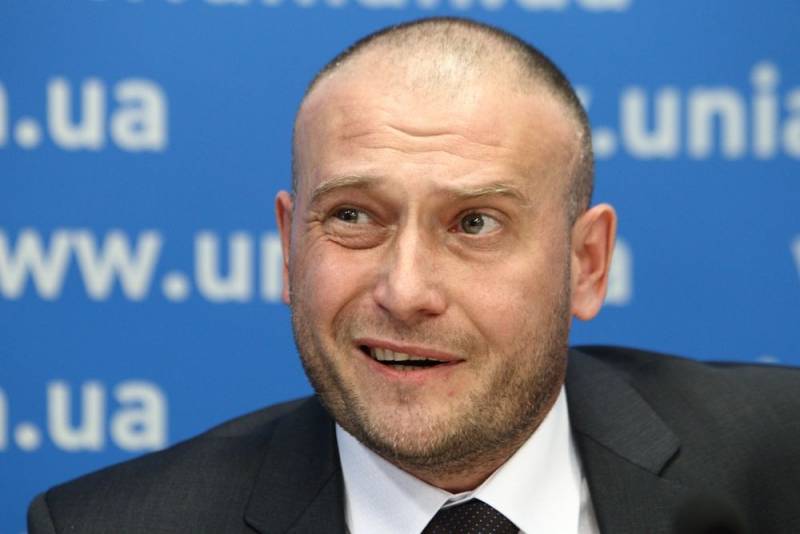 According to Yarosh, the National Battalions are used extremely ineffectively, becoming “an instrument in the hands politicians or criminals ". This leads to the "dissipation of the potential" of the national bosses.

After which he added that the war in the Donbass will continue in any case, since he does not believe in a diplomatic settlement. Moreover, he expects the APU offensive to someday take place. However, speaking of the Donbass, Yarosh himself did not notice how he began to contradict himself. After all, he still removes the National Battles from the "front", and does not strengthen the "fist" there. They even showed on TV how the Armed Forces of Ukraine and the Security Service of Ukraine were disarming the "patriots." But do not flatter yourself, in the "bins" they still have a lot of "trunks".

In this connection, an interesting question arises. What prompted Yarosh to take such a step? The answer lies on the surface. On the eve of the election of the president of the "nation." And Yarosh simply helps Poroshenko to be re-elected for a second term.

The thing is that Poroshenko uncontrollable complications in the Donbass are not needed. He does not want to see the DNI and LNR tanks on the streets of Kiev at the most inopportune and crucial moment. Especially when he is already trying on a crown, in the literal sense, in the hope of reigning forever, if the schism of the Orthodox Church is legitimized. For example, in England the queen is not only the head of state, but also the head of the church. So there are examples, but in gratitude Poroshenko may crown.

At the same time, Yarosh, with his gang of inadequate people who know how to kill, once in adequate places of compact residence, will become a “scarecrow” for the latter. Against this background, Poroshenko will look "handsome", a real civilized European and generally a worthy person. And you can always try to pass off any “pranks” nativizing in Odessa, Kharkov and any other city as yet another “Kremlin provocation”.
Ctrl Enter
Noticed oshЫbku Highlight text and press. Ctrl + Enter
We are
Russia will run out of oil: Prince Saud made a “prediction”
SBU wants the death of actor Pashinin, who is at war in the Donbass
Reporterin Yandex News
Read Reporterin Google News
1 comment
Information
Dear reader, to leave comments on the publication, you must sign in.