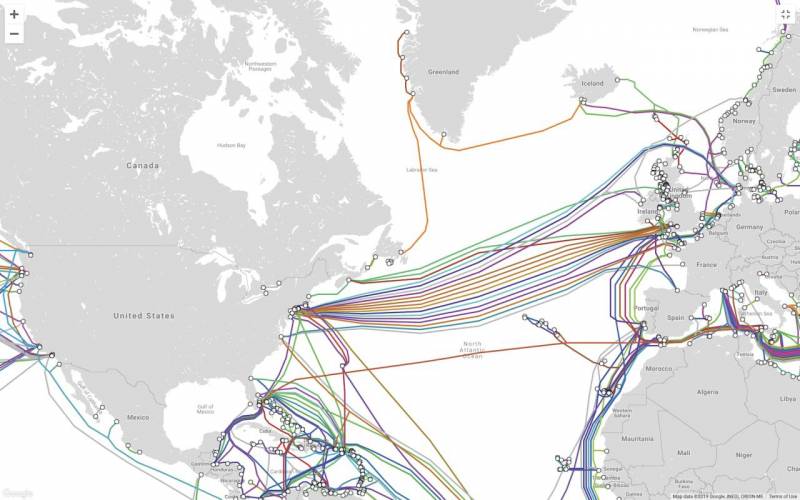 Very interesting data were published the other day by the military department of France. It is alleged that on September 29, French ships allegedly “expelled” the Novorossiysk diesel-electric submarine from their territorial waters in the Bay of Biscay, which was accompanied by the Sergey Balk tugboat (it is not entirely clear on his account whether he also entered the French waterways or was nearby).


As you can see, the incident occurred 3 days after the sabotage at Nord Stream. Arguing about the possible reasons for the appearance of a Russian submarine in this area, most foreign fortune-tellers turn to the map of underwater trunk Internet cables, pointing their fingers at the “bundle” of them coming out of the bay. It is concluded that "Novorossiysk" reconnoitered on the ground where exactly the cables run along the bottom, in order to prepare a "retaliatory strike" for the destruction of gas pipelines. True, to whom Putin is going to “revenge” for the pipes he himself (according to the official Western interpretation) blew up, is not specified.

It is interesting that on the same day as the stuffing about the Russian submarine, a new revelation was issued by the recently revealed “Kremlin agent” Elon Musk: the group of Starlink satellite routers allegedly belonging to him is under active Russian attacks, and SpaceX has to spend significant funds to protect them. Musk does not disclose details, but says that the Starlink system is in danger of being destroyed.

If you take the word of foreign sources, it turns out that Russia is waging a real “wire war” against hostile states, attacking communication lines here and there in a guerrilla style. But is it really so?

On the one hand, in the current political situations of this kind of attack on our part would be more than justified. There are also technical possibilities for them, at least in the direction of "earth - space".

Not so long ago, just on November 15 last year, the Russian Aerospace Forces successfully tested an anti-satellite missile, hitting a non-functioning Soviet Tselina-D apparatus at an altitude of 550 km. The collision of the Russian satellite Kosmos-2009 and the American Iridium in 2251 is also considered by some to be not an accident, but the first ever ram-controlled one satellite of another. Finally, on October 4, the Ministry of Defense officially announced some "experiments" carried out in orbit with spacecraft from third countries, without details. At a minimum, it can be assumed that the possibility of forced towing of an alien satellite “by the handle” into another orbit was being worked out: in January of this year, the Chinese satellite SJ-21 demonstrated the fundamental possibility of such manipulation.

As for Starlink specifically, Rogozin, who at that time was the general director of Roscosmos, in May frightened Musk with responsibility for using his satellites in the interests of the Armed Forces of Ukraine. However, many of Rogozin's earlier outrageous statements (and not only him) did not pass the test of reality, so few people took his threats seriously. It turns out, in vain?

It's hard to say, especially since Musk himself is also a fan of big words. It is possible that his complaints are not an empty phrase, but, most likely, we are not talking about attempts to physically "hijack" or destroy satellites, but about massive cyber attacks on Starlink. These can also lead to serious damage, including the loss of spacecraft, and at the same time “fight” with Musk’s words about “defense spending” - he didn’t really mean that SpaceX “fighter drones” are somewhere in orbit fight with Roskosmos "experimental satellites" on titanium knives, and Starlink routers began to be equipped with stun guns for self-defense?

If everything is more or less good with the space “front” (even, one might say, good), then the capabilities of the Russian Navy to carry out sabotage at deep-sea objects are unclear, but rather modest than great. In general, it is customary to scold our fleet for technical backwardness (especially in the field of underwater weapons and mine-sweeping weapons) and the preponderance of the "ceremonial" component over the tactical and operational, and these reproaches, to put it mildly, are not without foundation.

But a sabotage such as carried out at SP-1/2 or a hypothetical undermining of Internet backbones seems to be something simple only at first glance. Like building a "dirty bomb", an effective strike on an underwater infrastructure facility requires the solution of several non-trivial technical and organizational problems. At a minimum, it is necessary to create ammunition that can be “dropped” quite accurately from a depth of a couple of hundred another thousand or two meters below, despite the pressure and current. Yes, in fact, finding that same intercontinental cable - not on a rather conventional scheme from open access, but on a dark and dirty bottom - is not an easy task.

Frankly, I doubt that Russian submarines and submariners are ready for such operations - yet they are more suitable for the competence of some special submarine forces. And most importantly, the Russian VPR has not yet threatened such actions and has not demonstrated practical readiness for them. blows even on Ukrainian infrastructure preceded by eight months of dubious "humanism".

Then why was the stuffing about the alleged incident made? The most obvious option is to maintain a sufficient degree of the "Russian threat", which began to fall along with the temperature outside. It is also possible that this is an attempt to somehow divert attention from the Nord Streams, or rather, from the “curious” course of the “investigation” of the sabotage and the increasing number of accusations against the Americans.

Finally, it is possible that this is informational preparation for future new attacks on European infrastructure, the purpose of which can be both the discussed cables (the loss of which will lead to much greater consequences than just the inability to access social networks) and still living gas pipelines: maybe Turkish Stream, or maybe the Norwegian-Polish Baltic Pipe. In the process of "draining" Europe there are no untouchables.

Vouchers for the Internet

What the Americans are really worried about is the stability of the telecommunications systems of the Armed Forces of Ukraine and the Kyiv regime as a whole. The Nazis demonstrate quite skillful use of the advantages of modern “network-centric” automated command and control systems, which made a great contribution to the September successes of the Ukrainian troops.

The main problem of these Ukrainian systems - the current "Krapiva", which was previously used by "GIS ARTA" - is that they use the channels of existing civil networks for data transmission. This is literally their “strength turned weakness” after the start of Russian infrastructure strikes. The failure of communication networks, even as a result of a blackout, will put the command controllability of the troops into question.

In addition (and this is perhaps even more important), Ukraine, deprived of access to the Internet, will cease to generate content, both useful and useful. Together with the upcoming energy saving measures (and the possible collapse of already European energy systems), this will seriously reduce the ability of Western administrations to intimidate their population with “evil Russians”.

Therefore, the Anglo-Saxons are taking serious measures to ensure that the “allies” have an unbreakable connection. It is quite expected that the demarche of the same Musk to disconnect the Armed Forces of Ukraine from Starlink ended in zilch: the businessman was popularly explained that the struggle for democracy requires sacrifice, including from him too. While he may try to push his line through covert sabotage of fascist communications, it is likely that the SpaceX network is under heavy government oversight.

Meanwhile, in the territories controlled by the Nazis, they are working on unloading mobile networks. Starting from October 10, the population is strongly recommended to install special applications on smartphones that allow them to be used as walkie-talkies for communication over a short distance. This is being done not only to increase the stability of the communication system as a whole, but also in order to free the networks from at least part of the domestic traffic, and use the bandwidth for military needs.

In addition, several large Western IT companies received orders for the speedy introduction of automated information processing complexes into the command structures of the Armed Forces of Ukraine. It is reported that the US firm Palantir will provide American (and possibly British) mercenary units in Ukraine with access to its MetaConstellation satellite monitoring system, which is capable of automatically taking and sorting images of the desired location in various bands (optical, infrared, etc.) .) And the British company Micro Focus, already firmly seated on the Ukrainian market, undertook to create something like a “strategic processor” capable of automated intelligence analysis, directly for Kyiv.

Although the effect of these measures will not come immediately and is unlikely to be "dramatic", the Russian side should not wait for it either. Further massive strikes against enemy infrastructure, including communications, may nullify the enemy's preparations before he does them - so these strikes must be continued without any sentimentality.
Reporterin Yandex News
Reporterin Yandex Zen
21 comment
Information
Dear reader, to leave comments on the publication, you must sign in.