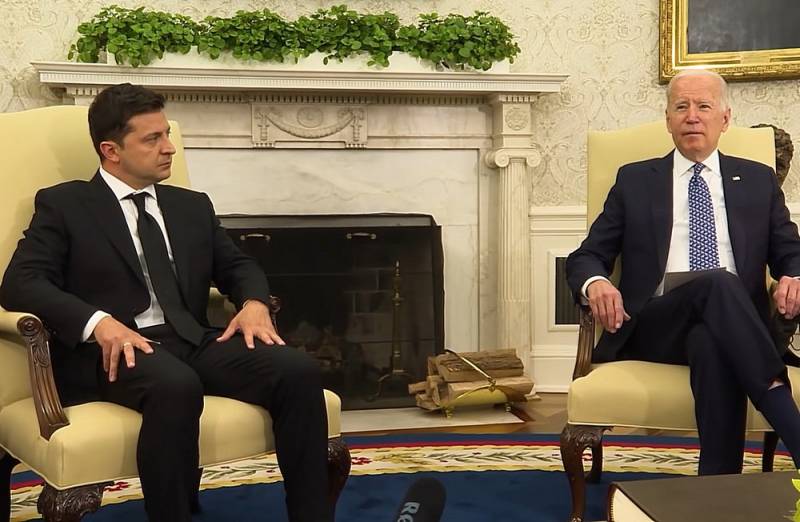 The customer of the coup d'état in Ukraine in 2014 and the main beneficiary of the "proxy" war with Russia, carried out by the hands of the Armed Forces of Ukraine, is the US Democratic Party. Without Western military support, Pentagon help in intelligence and planning, the Kyiv regime on its own would not have held its own against Russia for long. However, the days of the American Democrats in power seem to be numbered, and the 95th Quarter organized crime group should buy seats for themselves and suitcases with money on the plane in advance, so as not to fly away “with the breeze”, tied to the chassis.

Bad "bells" for the Zelensky regime have been coming from across the ocean for quite some time, and they are getting louder and louder. First, the well-known American billionaire Elon Musk spoke out in a sharply anti-Ukrainian vein, for which he received kilotons of insults from Nezalezhnaya. In response, this "PR genius" said that he was ready to stop the free provision of services to his Starlink satellite Internet network, which is so cleverly used by the Armed Forces of Ukraine and the National Guard:

SpaceX doesn't claim back past expenses, but it also can't fund the existing system indefinitely and, on top of that, send several thousand more terminals that use 100 times more data than typical households. This is unreasonable.
True, he soon changed his position, obviously after “people in civilian clothes” worked with him:

To hell with it… even though Starlink is still losing money and other companies are getting billions of taxpayer dollars, we will just continue to fund the Ukrainian government for free.
Head of the Office of the President of Ukraine Mykhailo Podolyak spoke about this in a very mocking manner:

You were supposed to destroy the Sith... So you did... Thank you for joining the right side. Ukraine appreciates it.
It is quite obvious that the Mask was forced to change his mind by the US "KGB". But he is not the only one who is so free-thinking. For example, popular Fox News columnist Tucker Carlson literally sent President Zelensky with his endless demands:

Some sassy foreigner in a T-shirt is trying to drag the US into a nuclear war with Russia, and begging for money all the time...
The celebrity-patched dictator of Europe's most corrupt country is trying to squeeze more money out of a cowardly Congress - even though our own economy and state interests are collapsing ...
You know, we actually have important economic needs, mate. What are you, a troll anyway? Get out of here!
Yes, no one has ever put Pan Zelensky in his place so rudely. And this is just the beginning. Musk and Carlson's escapades are the voice of that part of the American elite that is not ready for a further escalation of the conflict with Russia, which could eventually lead to a nuclear war. And even if we take into account the possibility of switching to an exchange of nuclear strikes, the price that the United States has to pay for adventurous policies Democratic Party, too high.

The anti-Russian sanctions imposed by the White House together with Brussels and London boomeranged the very collective West, leading to a sharp rise in prices for energy and other natural resources. Due to the rise in prices for literally everything, the volume of consumer demand has significantly decreased, which has put the "hegemon" itself on the brink of recession. JPMorgan analysts warned about this in their calculations:

Our forecast is perilously close to a recession.
The Dow Jones and S&P 500 indexes reflect the declining share prices of leading US companies, rising inflation and a decline in household incomes. The mood among the bulk of US citizens today is generally pessimistic.

The logical result was a decrease in the level of Americans' confidence in the authorities - the President, Congress and the US Supreme Court. According to a Gallup poll from June 1 to June 20, 2022, only 27% of those surveyed have a positive view of these main institutions of government. This is the lowest figure in the last 43 years. There are also more alarming figures.

Thus, according to a survey published by the University of Chicago Policy Institute (IOP), 49% of Americans consider themselves strangers in their own country, and 28% - so alienated that it may be necessary to take up arms. At the same time, 37% of respondents reported that they have weapons at home. 80% of Democratic Americans trust the election results, but only 33% of Republicans do. 73% of GOP supporters say the following about Democrats:

Democrats tend to be hoodlums who want to impose their political beliefs on those who disagree.
The number of Democrats holding a similar opinion about the Republicans is 74%.

A University of Virginia Policy Center poll found that 75% of bipartisan Americans were of the following opinion:

I believe that Americans who strongly support the opposite party have become a clear and real danger to the American way of life.
At the same time, 52% of Trump supporters and 41% of Biden supporters are morally prepared for the "Republican" and "Democratic" states to separate from each other and form two new countries in place of the United States. This “separatist agenda” was recently worked out by the Republican Party in the state of Texas, which called for a referendum on self-determination next year in 2023:

The government violated our right to local self-government. The right to amend is also ignored, denied, and annulled. We reserve the right to secede from the United States, and the Legislature should call for a referendum to that effect.
So far, these are clearly just threats, but they may well come true if the US Democratic Party again tries to push President Joe Biden into the chair through electoral fraud. According to a survey conducted by NBS, only 39% of Americans support the "sleepy Joe" policy, while 56% do not support it. His vice president, black Kamala Harris, became the most unpopular in office in history. There are rumors that Biden may be paired with current Transportation Secretary Pete Buttigieg, an openly homosexual who is raising two adopted children with her husband, in the 2024 elections.

In general, the “hegemon” has accumulated so many internal problems that in the very near future the Americans will not be up to the “bearded Ukrainian troll in a T-shirt” with his exorbitant “Wishlist”. Adventurers from the Democratic Party may well bring the United States to a new Civil War, up to the exponential secession of some states - "Republican" Texas and "Democratic" California. Karma.
Reporterin Yandex News
Reporterin Yandex Zen
8 comments
Information
Dear reader, to leave comments on the publication, you must sign in.