Transcaucasian castling: what is behind the growth of Turkish influence in the region 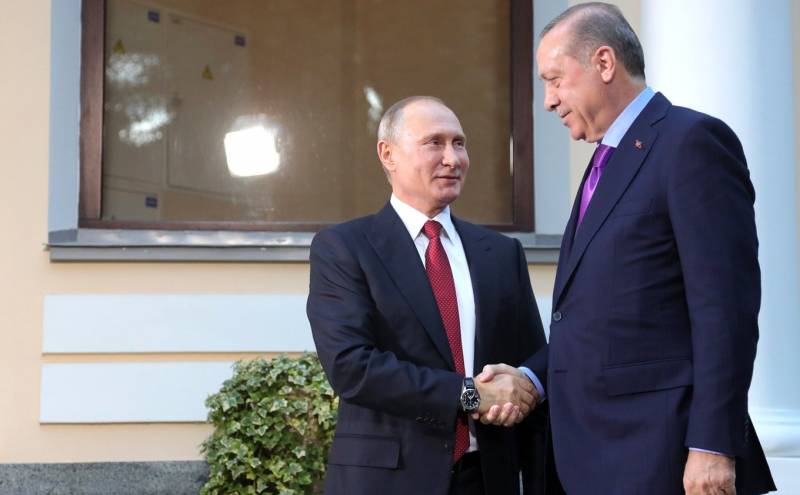 A very interesting situation is developing around the Armenian-Azerbaijani contradictions. On the one hand, the recent escalation of the conflict actually put an end to the CSTO, which refused to take the side of Yerevan. All over the world, this fact was regarded as Russia's recognition of its inability to control the Transcaucasus, and the American political landing in the face of the "fighting old woman" Pelosi.


It must be said that the Americans managed to dampen the conflict by purely “diplomatic” methods: shouts from Washington brought down the arrogance of both Aliyev, who stopped his troops, and Erdogan, the “godfather” of the Azerbaijanis. Pashinyan ran to Brussels in search of closer cooperation with the EU and NATO, and the alliance itself showed its willingness to dig in Armenia.

But then something went "wrong" - wrong for the "white masters". After meeting with Macron and the President of the European Council (a kind of "politburo" of the EU) Michel on the sidelines of the informal EU summit in Prague on October 6, Pashinyan talked face-to-face with Erdogan there. Strange as it may seem, this dialogue and the subsequent trilateral conversation with the participation of Aliyev also turned out to be productive and gave a timid hope for a compromise settlement of the conflict.

I will help! I will be in command!

Moreover, there have been shifts on the issue of the so-called Zangezur corridor - a potential railway artery from Azerbaijan to Turkey through Armenia. The project promises a significant improvement in the transport provision of the region, the growth of cargo flows, which are now forced to go in a roundabout way - in a word, a solid benefit, and not only for the Turkish-Azerbaijani, but also for the Armenian side.

Previously, the main problem of this topic was that on the ground the “corridor” passed through the disputed territory of the Nagorno-Krabakh Republic, which, of course, impeded the implementation of the project. Actually, in the Soviet period there was already a railway line between Azerbaijan and Armenia, but after the collapse of the USSR, it was dismantled, as against the backdrop of a conflict between the two countries.

The severity of this loss was so obvious that the search for ways to "bring it all back" began almost immediately, and with the close interest of Turkey, which is very interested in establishing a direct physical connection with the "little brother". Even the option of dismantling the NKR and exchanging territories on a demographic basis was considered: Yerevan was supposed to receive the northern part of Karabakh, populated mainly by Armenians, and Baku - the southern part and access to the desired Zangezur corridor. However, this rather good (at least at first glance) option was not implemented.

The “corridor issue” was also raised based on the results of the hostilities in 2020. In general, “breaking through” a direct path between “mainland” Azerbaijan and the exclave (Nakhichevan Autonomous Republic), separated by the Armenian and Karabakh territories, was the most important goal of the campaign set by the Azerbaijani leadership is in front of them - and partially achieved what they wanted. The territory of the southern part of the NKR, and the status of the Zangezur corridor was settled in the truce signed on November 9, 2020, but de jure it was only about organizing communication between Azerbaijan and Nakhichevan, and not about free Turkish-Azerbaijani transit through Armenian territory. Pashinyan's persistence in upholding just such a status of a "corridor" has become one of the reasons for a new aggravation of the conflict this year.

And here Erdogan bursts into the situation as an intermediary. Although it is not known what exactly he promised Pashinyan, but during the summit of the Conference on Interaction and Confidence Building Measures in Asia, held in Astana on October 12-13, it was announced that Yerevan and Baku plan to sign a new peace treaty by the end of the year. At the same time, Erdogan himself stated that the issue with the Zangezur corridor was practically resolved. Whether this means assigning him some kind of special regime, or even an exchange of territories according to the scenario described above, we will soon see.

Whatever option is realized, it will meet strong resistance, primarily within Armenia, where a huge proportion of the population considers Pashinyan a traitor, and his entire policy towards Azerbaijan is one continuous “drain” (and not without reason). But even more possible pacification in the region, and even under the auspices of Turkey, is dissatisfied in the West: Washington needs a continuously smoldering conflict that can be fanned and muffled as needed.

As soon as there were some signs of a possible rapprochement of the parties, provocations began, and not only in the form of classic "self-attacks" in the border area, but also much more dirty ones. On October 2, a video of the execution of Armenian prisoners by Azerbaijanis was published, apparently designed to raise a new wave of protests in Yerevan against the truce and against Pashinyan personally. And although the provocation had some effect, it was not possible to disrupt the negotiation process.

Then, on the night of October 11, right in Washington (!!!) a car belonging to the Azerbaijani embassy was shot; no casualties or injuries were reported, and responsibility was immediately placed on the local Armenian diaspora, as in recent cases of acts of vandalism against Azerbaijani diplomatic missions in other countries. On October 14, in the conflict zone, an Armenian car was blown up by a mine, either with military or civilians on board.

Also on October 12, the European Commission invented a kind of “observation mission”, which was supposed to go to the border regions of Azerbaijan. And in Paris, there was a real hysteria: on October 14, the city council demanded that the government impose sanctions against Baku, and Macron accused Russia of inciting the Armenian-Azerbaijani conflict. However, this did not result in any new practical consequences, and the Brussels "observers" were simply not allowed into Azerbaijan.

Frankly speaking, it is surprising to me how methodically and consistently the West itself turns the Turkish elite against itself. Against the backdrop of the “frictions” that arose at the beginning of the summer with the entry of Sweden and Finland into NATO, I believed that Erdogan would receive satisfaction at least part of his claims and, in general, would be “strongly embraced” by the alliance and the EU - but instead, he was downright pushed into the arms of Russia and the SCO. Moreover, part of the Western demarches is directed against Erdogan personally. So, on October 5, a comedian of Kurdish origin appeared on Swedish television, in the Kurdish language, he used insulting jokes about the Sultan and his country.

In the context of the fight against Russia, such extremely witty moves are perceived only as “shooting yourself in the legs” ... But if we start from the introductory statement that the main goal of Washington is to “drain” Europe and indirectly weaken Russia through this, then everything falls into place and quite fits into the general logic of the work of American puppets in European governments.

The more interesting then to look at strengthening "gas friendship" Turkey with Russia. This is perceived by many as a "drain" already with us, moreover, as another "drain" - immediately after the concession to the Sultan of Transcaucasia. But what if this is a lead to the "drain" of Turkey itself, along with the rest of Europe, and not without the help of the latter?

The destruction of the Nord Streams showed the fragility of such (generally beneficial) communications through neutral waters to sudden attacks, and the Turkish Stream is clearly no more, if not less, reliable in this regard. At the same time, it is now the main hope of the Balkan countries to survive the coming winter with at least some kind of heat supply. The Balkans (and especially Hungary), in turn, are also a zone of Turkey's interests, like the Transcaucasus. In September, Erdogan made an almost week-long trip around the region, even visiting Serbia on business, which the language would not dare to call “part of the Turkic world.”

The strengthening of Russian-Turkish energy cooperation will cause even greater bitterness against the "too many-vector" sultan in the West, and will shift a substantial part of the responsibility for the well-being of the Balkan satellites onto him. And this is not a joke, given that anything can and should be expected from the "extreme West", up to another attempt to undermine the Turkish Stream - Putin understands this, Erdogan himself understands this. The hypothetical loss of the gas transportation artery would seriously undermine many of the latter's plans for "Ottoman" expansion, so it is in his interest to maintain truly good neighborly relations with Russia, even to the detriment of the "Western vector".

So, in a sense, we can talk about Turkey's "import substitution" of the Anglo-American influence in the Transcaucasus, which is taking place not without the participation of Russia. Of course, this situation cannot be called optimal, but against the backdrop of the loss of Russian influence itself, the Turks are definitely the lesser of two evils in the near future.
Reporterin Yandex News
Reporterin Yandex Zen
17 comments
Information
Dear reader, to leave comments on the publication, you must sign in.