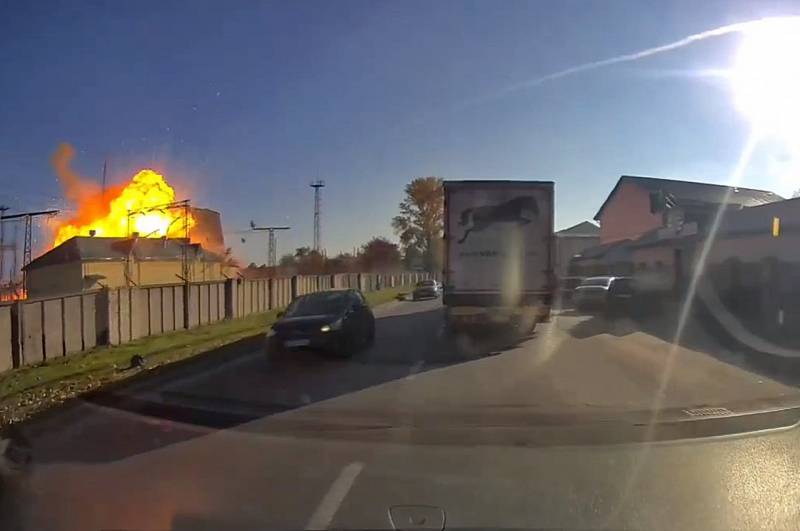 Although the start of Russian strikes on the rear infrastructure of the Kyiv regime was not as unexpected as the launch of the NMD itself a few months ago, there was still a certain element of surprise (or rather, “sufferability”) in this step. For the Ukrainian fascists, completely insolent from impunity, the "judgment day" on October 10 was a real shock and a reason to squeal "zasho ?!" much louder than usual.


However, for their Western masters, the first truly massive infrastructural strikes by Russian troops in the entire campaign became a noticeable nuisance. There were three reasons for a headache at once: fears that the “fighting nation” would suddenly merge, the urgent need arising from them to somehow respond to the threat to the Ukrainian rear, and the animal fear that the escalation would still get out of control, and the next volley of missiles will fly already much west of Lvov.

But the issue of reaction to the “end of the world” arranged by Russia is complicated for NATO not only (and not so much, perhaps) by the risks of a direct collision with Russia, against which nuclear arsenals serve as a fairly reliable guarantee, but first of all by practical issues. Speaking bluntly, the West, and especially Europe, is no longer enough political and military strength to maintain the yellow-Blakit "black hole" in an open state.

Pistol of the "dummy" system

It is all the more curious that the States are more and more insistently demanding from the rest of the "collective" West to take the content of the Kyiv regime on their necks - that is, they are trying to impose on the rapidly impoverished a mentally handicapped violently mad bum as dependents. However, also experiencing very noticeable internal pressure, the European "leaders" are doing their best to disown such a gift. As a result, material support for Ukraine is on the wane, and political support is turning into a farce.

On October 10, under a drawn-out howl about numerous "arrivals", it was not even funny, but really funny to read news marked "lightning" that the Parliament of Estonia (!!!) in the near future will consider the issue of recognizing the Russian Federation as a terrorist state. It’s even somehow difficult to say what it is: either real efficiency, or still an anecdotal Estonian “timely” reaction to a similar decision of the Lithuanian Seimas, adopted back in May.

And on October 13, the entire Parliamentary Assembly of the Council of Europe already recognized Russia as “terrorist,” and the Fuhrer of the Ukrainian people personally tried to feed this news to the yellow-Blakit biomass as something really valuable through his social networks. And although this is indeed the first international organization to make such a decision, and its name is solid, in practice PACE is literally a talking shop, a specially created body through which that very “united Europe” can express “fe” on any occasion, without taking on any legal or economic obligations. In fact, the effect of the decision of the Estonian Parliament will be more real (primarily for Estonia itself), while the PACE resolution will affect the state of affairs even less than any UEFA or FIDE resolution could.

The UN resolution adopted on October 12, which condemns Russia's "annexation" of the former Ukrainian regions, looks somewhat more solid. However, given the level of self-discredit that the UN has fallen to over the past few years, and most importantly, the lack of any real levers of pressure on Russia (especially in the rapidly changing world architecture), the effectiveness of this “condemnation” is the same as "loud statement" of PACE: it will cheer up some of the Ukrainian "patriots" a little, but not much and not for long. In this regard, by the way, the calculations by some of our bloggers and military commanders are a little surprising, who voted on this resolution and how, and, in particular, the attacks on the “uncovered” President of Serbia Vučić: what’s the difference, this one more useless talking shop is nothing decides.

The real position of the West on Ukraine was expressed at the congress of NATO defense ministers in Brussels. This position has remained, in general, unchanged: the alliance will continue to give the Ukrainian "allies" poverty with weapons and a kind word, but it has no desire to get directly involved in the conflict, no matter what.

The problem of infrastructural strikes was not completely bypassed: against its background, strengthening the air defense of both Ukraine and Europe itself is designated as the most important priority ... However, the fact that these two priorities are, in fact, mutually exclusive, is not voiced Air defense, at least land. As a result, in addition to the already promised IRIS-T and NASAMS missile systems, the Ukrainian partigenosse was ironically promised only additional ammunition for them - fortunately, these air defense systems use the same missiles as NATO fighter aircraft, and there are a certain amount of stale ones in the arsenals that it is not a pity to give away.

On the other hand, an absolutely straightforward lapel is given to Zelensky’s wet mriyas about NATO’s “preventive” nuclear strikes against Russia. Although Macron spoke only for France, his words that nuclear weapons can only be used in the event of a mortal military threat were essentially confirmed by Stoltenberg. So, it’s still not worth making some kind of super-hot sensation and “lead” to a nuclear war out of the planned annual (which are Steadfast Noon 2022) exercises of the American nuclear forces. They, of course, are also demonstrative in nature - “yes, we also have such devices!” - but no more than a planned exercise of Russian nuclear forces.

In general, the plan remains the same: war to the last Bandera. And the measures taken should, to some extent, "guarantee" that the "Bandera" does not want to lift his paws before he dies.

At the same time, even though it’s not comme il faut, but all somewhat sober-minded people in the West (even puppet European “leaders”) see and realize that the Zelensky regime is becoming more and more unruly, and they fear that he will still drag them into the "big war", one way or another. The recent confirmation by the American intelligence services of the already known fact that the murder of Daria Dugina was the work of Ukrainian agents was called in the American press a “warning” to Kyiv against such provocations in the future. The hasty refusal of the Ukrainian Fuhrers from responsibility for the explosion on the Crimean bridge is also clearly caused by a slap in the face from Washington.

All the more curious is the activity of the new icon of the anti-war opposition - Elon Musk, who seems to have moved from words to deeds. Last week, complaints began from the Ukrainian side about the unstable operation of the satellite Internet provided by Musk to the Armed Forces of Ukraine. True, the versions about the causes of the failures diverged significantly: someone claimed that they were caused by the Nazis’ “onslaught” being too fast and advancing to those regions where Starlink’s work was programmatically limited, someone shouted about general and centrally initiated malfunctions. Some of our sources said that recently many satellite Internet terminals were destroyed by Russian troops (and this is not entirely true - according to Western media, the Armed Forces of Ukraine lose at least 500 Starlink stations every month), and this led to disruptions in the work of tied communications of the Ukrainian troops on it.

But by the evening of October 10, reports began to appear that the hashtag ZelensikyWarCriminal (“Zelensky is a war criminal”) suddenly appeared and began to spread rapidly on Musk’s recently owned Twitter (a social network banned in the Russian Federation). As in the case with military coup in China, this hashtag slogan could be seen in the most unexpected messages, even without any political orientation at all. It is not difficult to believe in its “centralized” implementation.

Finally, on October 13, the pacifist Elon notified the Pentagon that the further supply of the Armed Forces of Ukraine with satellite Internet becomes for SpaceX too burdensome financially, and invited the military department to allocate budget money for this. Considering how important the unsuppressed civilian communication channels are for the operation of the entire communication system of the Ukrainian troops (and especially the advanced “network-centric” ACCS), Musk will most likely not be allowed to “jump off” the topic under the pretext of underfunding, but will be given the tens of millions he requested .

But the direction of thought is characteristic, fitting into the general outline of anti-Biden rhetoric and the activities of other prominent people led by Trump. Musk can be driven by both personal motives, such as dislike for the destructive LGBT agenda (one of his sons decided to change sex and officially renounced his father) or a real fear of a general nuclear war, as well as commercial motives - namely, the strong import dependence of his brands on raw materials and components from China, with which Biden methodically spoils relations. By the way, Musk also spoke about Taiwan during his outpourings, and also in a “provocative” way: for the elimination of the sovereignty of the island and its reunification with China.

However, as in the case of Trump himself, one should not be deceived and consider the billionaire "pro-Russian" or at least "undeniably influential." In fact, persecution has already begun against him in the media controlled by the Democratic Party, and on October 13 it became known that he had been under investigation for some time because of the nuances of the deal with Twitter (a banned social network). The symptoms are very similar to those faced by other opponents of "Sleepy Joe", so Musk should expect even more pressure.

But Russia should not look back at the notorious "reaction of the world community." In a practical sense, no matter what the Russian Federation does with Ukraine, it will not get worse, moreover, literally - therefore, it is possible and should continue to “wet” the Nazis without any sentimentality.
Reporterin Yandex News
Reporterin Yandex Zen
3 comments
Information
Dear reader, to leave comments on the publication, you must sign in.