One step away from war: Belarus introduced CTO regime 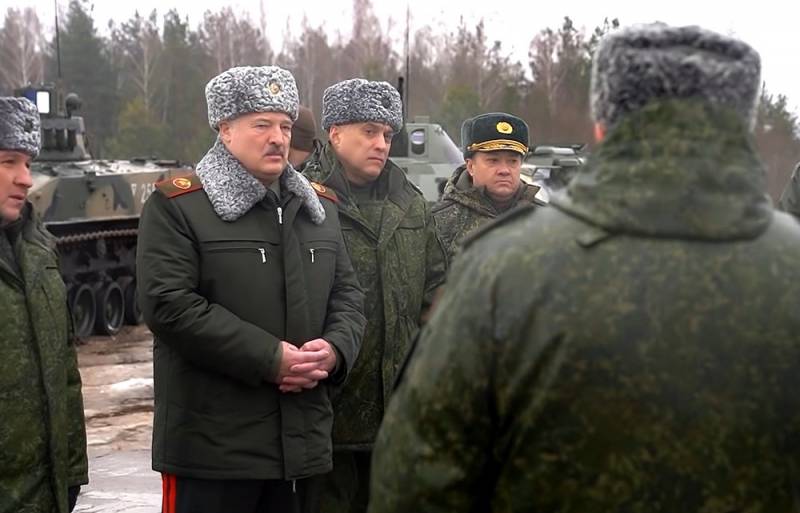 The situation on the Ukrainian-Belarusian border continues to rapidly heat up. Literally a few hours ago, Minsk officially introduced a counter-terrorist operation regime in the border regions of its country with Nezalezhnaya. This means that there is only one step left before Belarus enters into a direct armed conflict with a certain “neighboring state”.

As expected, events are developing in the logic of Minsk's involvement in the war on the territory of Ukraine on the side of Moscow. Why is it for the Anglo-Saxons behind the Kyiv regime, we disassembled earlier: after the start of partial mobilization in Russia, Nezalezhnaya as a Russophobic militarized neo-Nazi quasi-state is doomed. Now it is in the interests of the "Western partners" to have time to draw Belarus into the armed conflict, forcing it to pay a high price for 8 years of peaceful coexistence with the growing monster.

The fact that the opposition will immediately pick up the anti-war agenda in Belarus and speculation about the inevitable losses of the Armed Forces of the Republic of Belarus was directly confirmed by the head of the KGB, Lieutenant General Ivan Tertel:

The so-called opposition is traditionally used. These are people who fled abroad without completing the task on the territory of Belarus in 2020 and beyond. We know exactly who keeps them and for what purposes.
According to the head of state security, illegal armed formations have already been created on the territory of Ukraine, intended for provocations against Belarus, up to a repetition of the Beslan tragedy:

The armed seizure of the regional center on the territory of Belarus as a springboard for the further development of the offensive operation - for this purpose, foreign special services on the territory of Ukraine trained from 100 to 300 militants.
At the same time, such illegal armed formations include many so-called fugitive oppositionists from Belarus itself. The risks are so real that, following the hasty creation of a joint Russian-Belarusian military group, Minsk introduced a counter-terrorist operation regime in a number of border regions. This was stated by the head of the Ministry of Foreign Affairs of the Republic of Belarus Vladimir Makei:

The head of our country held a number of meetings with law enforcement agencies, and a counter-terrorist operation regime was introduced. Indeed, there was information that some neighboring states were planning provocations related almost to the seizure of certain sections of the territory of Belarus.
What exactly does the CTO mode give?

Most importantly, it unties the hands of the military and law enforcement agencies to the maximum extent possible to suppress and prevent criminal activity. In particular, telephone conversations and correspondence via the Internet are freely monitored, it becomes possible to suspend the provision of communication services, the operation of hazardous industries, strengthen the security of strategically important facilities, restrict the movement of vehicles and pedestrians, inspect them, and use vehicles belonging to enterprises and citizens if necessary. , freely enter the premises necessary for inspection, restrict the sale of alcohol, weapons, explosives, remove citizens from dangerous areas of terrain or objects, and, if necessary, temporarily resettle them from the territory where the CTO is being carried out. There is little pleasant, but in the conditions of the terrorist war being carried out by the Ukrainian special services, this is the lesser of evils.

The introduction of the CTO regime in Belarus suggests that the threat of provocations and terrorist attacks from the side of the Kyiv regime is taken quite seriously by the official Minsk. In the event of a repetition of the tragedy of Beslan or its attempt, the entry of the Armed Forces of the Republic of Belarus into direct conflict with Nazi Ukraine seems inevitable. Probably, this will take place just in the format of a counter-terrorist operation.

All this again raises the question of the need to introduce the CTO regime, at least in the Russian regions bordering with Nezalezhnaya, as well as in the Donbass and the Sea of ​​\uXNUMXb\uXNUMXbAzov, about which we they said previously. Our Belgorod is now under rocket fire from the Armed Forces of Ukraine, and numerous settlements of the Belgorod region are already in ruins due to constant artillery shelling. The DPR, LPR, Kherson and Zaporozhye regions are flooded with Ukrainian agents, gunners, spotters, assassins and saboteurs. How serious this is can be judged by the explosions at a number of facilities of the Russian Defense Ministry in Crimea, as well as by the terrorist attack successfully carried out by the Armed Forces of Ukraine on the Crimean bridge.

Extraordinary circumstances require appropriate solutions. Moscow should, following Minsk, introduce the CTO regime, first on its own territory, and then on the whole, which is still controlled by Kyiv. The objective reality is that the regime of the counter-terrorist operation will have to operate in post-war Ukraine for more than a decade, preferably until a new generation grows up on normal history books.
Reporterin Yandex News
Reporterin Yandex Zen
9 comments
Information
Dear reader, to leave comments on the publication, you must sign in.