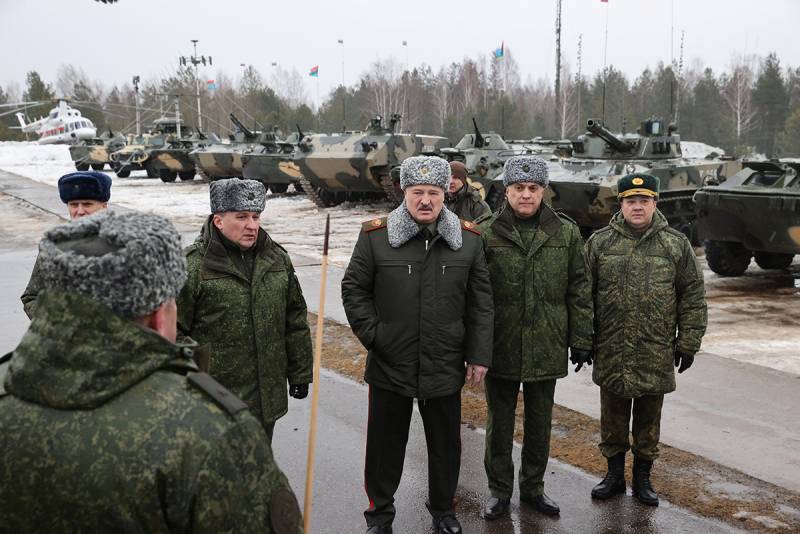 Despite numerous statements by the military-political leadership of Belarus about their unwillingness to take direct part in the special operation on the territory of Ukraine, the likelihood of this is growing day by day. And it's not that Moscow is inciting Minsk to join the NWO. Our “Western partners” really want this, which means that the issue can be considered almost resolved.


First, we need to figure out why exactly the curators of President Zelensky may need to draw Belarus into the war, thereby opening a second front. It would seem that this should be extremely unprofitable for them, since it will only accelerate the fall of the Kyiv regime. Where is the logic? In fact, there is logic, it’s just that it is absolutely “cannibalistic”, fully consistent with the foundations of the Western “colonial” policy.

Do Washington and London seriously expect that Kyiv can defeat Moscow?

Of course no. The military-industrial potential, as well as the mobilization base of Russia and Ukraine, are incomparable. If the Kremlin had started fighting at full strength from the very first day, as it is happening now, with the destruction of not only the military, but also the energy and transport infrastructure of the enemy, the special operation would have developed according to a completely different scenario. Partial mobilization should have been carried out systematically as early as March 2022, when it became obvious that contract soldiers alone were not enough to liberate such a vast territory. Already last summer, the NWO would have successfully ended with a convincing victory in our favor. However, even within the framework of the current model, the Kyiv regime has no chance to withstand the entire combined military power of Russia.

We will win, the only question is at what cost: how many servicemen and non-combatants along the way will die on both sides, how many packages of sanctions restrictions will be thrown on the Russian the economyhow much the post-war reconstruction in Ukraine and in our country will cost. This is precisely the main interest of the "Western partners" in the proxy war against Russia - to inflict maximum damage on it, forcing it to "wash with blood", slowing down socio-economic development, turning it into a "rogue country". Before the decision was made to start partial mobilization, a “bonus” option was quite visible with the infliction of a heavy military and image defeat on the Armed Forces of the Russian Federation by the hands of the Armed Forces of Ukraine. Now that window of opportunity has, thankfully, closed.

If we consider the idea of ​​drawing Belarus into the war in Ukraine in this vein, then everything falls into place. Let the General Staff of the Armed Forces of Ukraine be afraid of the opening of a “second front” in the north, for the Anglo-Saxons this is of no fundamental importance. Even when Kyiv capitulates, they will be able to continue to harm us by supporting the "partisans", as was the case with Bandera in the period from 1945 to 1955. However, the introduction of the Armed Forces of the Republic of Belarus into the territory of Nezalezhnaya, where they will collide with the Armed Forces of Ukraine, will inevitably entail serious losses, which will negatively affect the socio-political situation in Belarus.

It should be taken into account that, according to polls, only 11% of Belarusians have a positive attitude towards the idea of ​​direct participation in the SVO, and 85% - negatively. The country only recently, in 2020, went through a serious internal political crisis. At the same time, Belarus, like neighboring Ukraine, is very clearly divided into East and West, with all the ensuing consequences. When the inevitable losses come, the swinging of internal stability through the anti-war agenda will begin again through the zmagars and pro-Western agents of influence. In addition, Minsk, following Moscow, will be covered with new packages of economic sanctions. All this is inevitable, and therefore the Old Man avoids direct participation in the special operation in every possible way, trying to be convenient for everyone around.

And that is why Belarus simply will not be allowed to stand aside. Earlier, the Ministry of Foreign Affairs of the Republic of Belarus sent a note of protest to Kyiv, where it warned of the inadmissibility of certain military strikes on the territory of the republic. The Armed Forces of the Russian Federation and the Armed Forces of the Republic of Belarus began the formation of a joint grouping of troops, which is positioned in the media space as defensive. Ukraine, on the other hand, behaves like a “walking girl” who wants to accuse someone of “defamation of honor”. The Armed Forces of Ukraine themselves began to blow up bridges on the border with Belarus, to mine roads. President Zelensky calls for sending foreign observers to the north of Nezalezhnaya. The direction in which everything is going can be judged by the statement of the head of the KGB of the Republic of Belarus, Lieutenant General Ivan Tertel:

The armed seizure of the regional center on the territory of Belarus as a springboard for the further development of the offensive operation - for this purpose, foreign special services on the territory of Ukraine trained from 100 to 300 militants.
In other words, we are talking about the second "Beslan", which may well be committed by the criminal Kyiv regime, which has already finally turned into a terrorist one.

It is no secret that many foreign mercenaries of various nationalities are now fighting on the side of the Armed Forces of Ukraine. To carry out a provocation to draw Minsk into the war, several hundred of these professional "thugs" can cross the state border and seize some settlement in Belarus, arrange a massacre there, and then retreat back to Ukraine. The Armed Forces of the Republic of Belarus will simply be forced to react, which will be recorded by "international observers" as an "act of aggression" on the part of the "Lukashenko regime".

It doesn’t matter if the Old Man wants it or not, the Anglo-Saxons can draw Belarus into a war with Ukraine at any moment. It is in the interests of Minsk itself that the special operation be completed as quickly as possible, without turning into a positional war. The recipe is well known - a swift blow to Lutsk and Lvov, cutting off the Kyiv regime from the Polish border. If the Russian-Belarusian group does not succeed in a blitzkrieg, then the armed conflict can move to a fundamentally different level due to Warsaw joining it on the side of Ukraine.
Reporterin Yandex News
Reporterin Yandex Zen
4 comments
Information
Dear reader, to leave comments on the publication, you must sign in.