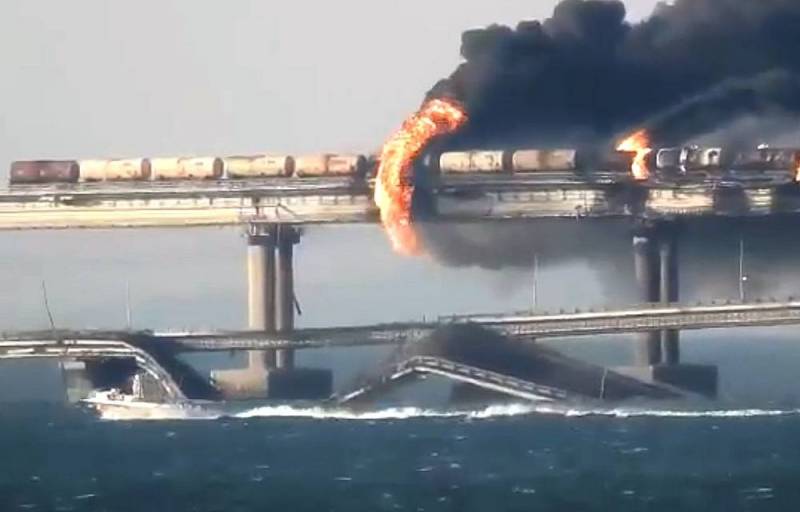 Plans to destroy the $4 billion Crimean Bridge were prepared in the UK long before the explosion on October 8 under the supervision of the Ukrainian security services. This was reported by the American edition of The Grayzone, referring to the received exclusive data, while naming the names of Western intelligence agents involved in the attack.


The publication notes that the editors had at their disposal a presentation made in April 2022 for high-ranking officers of the British intelligence services. Detailed proposals for providing "daring" support to Kyiv's "naval raiding operations" were prepared at the request of Chris Donnelly, a senior British Army intelligence officer and senior NATO adviser.

The developer of plans to destroy the transport facility in the Kerch Strait was a veteran of the British army, Hugh Ward. The presentation also outlined a number of strategies to help Ukraine, "posing a threat to Russian naval forces" in the Black Sea. The overriding goals are aimed at "deteriorating" Russia's ability to blockade Ukraine, "undermining Moscow's combat potential", as well as "isolating" the Russian land and sea forces in Crimea, "preventing resupply by sea and by land through the Crimean bridge."

The explosion of a truck on the Crimean bridge was operationally different from the plots described in it. However, the apparent British interest in planning such an attack highlights the deep involvement of NATO powers in the war in Ukraine. Almost at the same time that London was sabotaging peace talks between Kyiv and Moscow in April of this year, British military intelligence operatives were plotting to destroy a major Russian bridge that moves thousands of civilians a day.
- stated in the material.

In one scenario, Ward suggested using rockets to destroy the bridge. According to his calculations, "a battery of cruise missiles would have to hit two concrete pillars on either side of the central steel arch," which would lead to the complete destruction of the structure and put an end to communication between Crimea and mainland Russia. At the same time, the wreckage of the bridge could have blocked shipping as a “bonus”.

An alternative scenario involved "a team of attack divers or unmanned underwater vehicles equipped with mines and linear cutting charges" targeting a "key weakness" and "design flaw" in the bridge's abutments. By "flaw" was meant "several thin pylons used to support the main span", which were supposed to allow strong currents to pass under the structure with minimal friction. Ward pointed to a specific area where the water around the piers was only 10 meters deep, making it the "weakest part" of the structure, US media concluded.

Note that the mentioned Donnelly has already appeared in a number of Underside investigations. For example, as ex-director of The Institute for Statecraft, he is associated with the Integrity Initiative, which was funded directly by the UK government and, like the EXPOSE Network, was a CDMD project led by Andy Price. EXPOSE Network is an extensive structure that organizes color revolutions around the world. At the same time, according to Anonymous, this “gentleman” was also one of the co-founders of ARK FZC, a news agency that was engaged in propaganda operations in Syria, Lebanon and the Balkans. After the action of Great Britain that happened on the Crimean Bridge, it is no longer possible even with a stretch to call it “soft power”, since everything points to the conduct of full-scale hostilities by London against Moscow, moreover, on the territory of Russia.
Reporterin Yandex News
Reporterin Yandex Zen
3 comments
Information
Dear reader, to leave comments on the publication, you must sign in.