Has the decision to “liquidate” Ukraine been made? What if Belarus joins the NWO 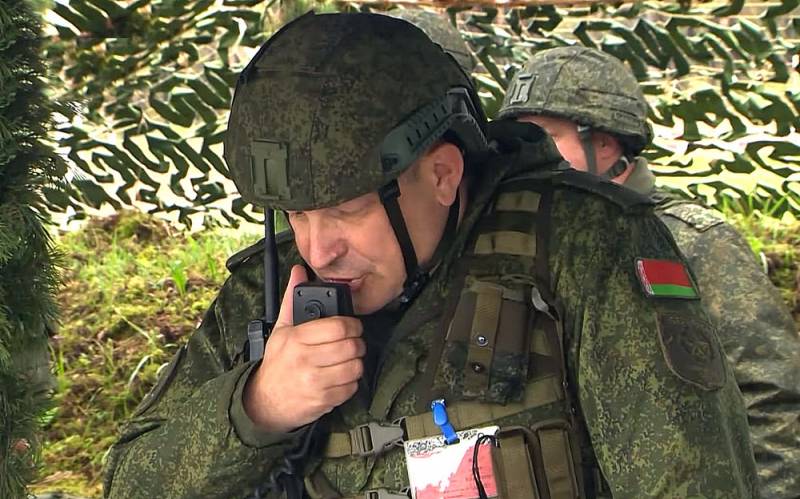 The situation on the Ukrainian-Belarusian border is rapidly heating up. Every day there is more and more evidence that Minsk is ready to join the Russian special operation not only as a springboard and reliable rear, but also as a direct participant. However, this may well turn out to be an imitation on the verge of a foul.

It became known that Russia and Belarus are again creating a joint group of troops. President Lukashenko told journalists about this:

In connection with the aggravation on the western borders of the Union State, we agreed to deploy a regional grouping of the Russian Federation and the Republic of Belarus. It's all according to our documents. If the threat level reaches the current level, as it is now, we begin to use the Union State grouping.
At the same time, attention is drawn to the fact that the Belarusian troops will form the basis of the grouping. According to Alexander Grigoryevich, the decision was made jointly with President Putin at a meeting on October 8, 2022. Recall that it was on this day that Ukrainian terrorists carried out a diversion on the Crimean bridge, as a result of which significant property damage was caused and there were casualties among peaceful Russians.

It also became known that not far from the Ukrainian border, in Belarus, at the Luninets airfield, modernization is currently underway, as a result of which operators of Iranian kamikaze drones Shahed-136 ("Geran-2") should be located at this airbase. The range of these deadly UAVs will cover targets across northern and western Ukraine, saving more expensive cruise missiles. In addition, the transfer of armored vehicles of the Armed Forces of the Republic of Belarus to the Ukrainian border is recorded.

All together it looks like preparations for the opening of the “Belarusian front”. The timing for this is exceptionally opportune. Right now, in the north of Donbass and in the Sea of ​​Azov, we have even more serious problems than before.

Taking advantage of the multiple numerical advantage and modern technique Western production, the APU continue to push and move forward. There is, alas, a non-zero probability that the enemy will be able to break through from Zaporozhye to the Sea of ​​Azov and cut the land corridor to the Crimea, at the same time "finishing off" the bridge crossing over the Kerch Strait. This will automatically put the Russian grouping in the Kherson region in a dangerous position, forcing it to another “regrouping”. There is even a risk of losing the foothold on the right bank of the Dnieper. All these problems are a direct consequence of the shortage of forces involved in the NMD.

It should be noted that a solution has already been found in the form of partial mobilization, within which up to 300 reservists will be called up. The process has already begun, but it is impossible to simply abandon those mobilized to the front without preparation. This takes time, and significant replenishment is expected in the Donbass and in the Sea of ​​\uXNUMXb\uXNUMXbAzov by November, and in December the situation will change significantly in our direction. However, right now, the next few weeks, it will be the hottest time when the Armed Forces of Ukraine will begin to squeeze the maximum out of their advantage, which will soon be leveled.

The General Staff of the RF Armed Forces needs to win these few critical weeks, and the option with the "Belarusian front" seems very reasonable. The fact is that Kyiv's resources are finite, despite the mobilization carried out. Now he throws everything he has into battle, removing reserves from other directions. As they say, hit or miss. And here the prospect of getting hit from the rear should dramatically change the plans of lovers of "ancient solar symbols." Like us told Earlier, Minsk handed the Ukrainian ambassador a diplomatic note with the following content:

Ambassador of Ukraine Igor Kizim was invited to the Belarusian Foreign Ministry, where he was handed a diplomatic note. In the note, the Belarusian side claims that Kyiv plans to strike at the territory of Belarus.
By all its actions, Belarus shows that it is also ready to join the special operation on the side of Moscow. And in Kyiv, apparently, they believed. This can be evidenced by today's hasty undermining of bridges on the border with Belarus by the defense industry and mining of highways. By the way, this is a stone in the garden for those of our "strategists" who "protect" the Ukrainian railway bridges and other transport infrastructure in the hope of taking possession of it later. It won’t work: retreating, the APU will simply blow everything up.

It must be assumed that right now the Ukrainian General Staff will be forced to begin withdrawing forces from the Southern and Eastern fronts and returning them to Kyiv. Even if Minsk's latest actions are just an imitation, it looks convincing enough.

But what if this is not an imitation, but real preparatory actions for the entry of Belarus into a special operation on the side of Russia? Then this radically changes the whole matter and the prospects for ending the war in our favor.

It should be noted that President Lukashenko has been emphatically keeping aloof from active actions all this time, confining himself to providing his territory to the RF Armed Forces as a springboard and a safe rear. It seems that the smart and far-sighted Alexander Grigorievich did not want to "fit" into all these "muddy" deals with the "agreements", as a result of which a hostile militarized state of the Nazi persuasion, under external control, was to remain near his border. “We do not kill” – that was his message to Ukrainian and Western partners. But then what has changed?

The morning of October 10 began with massive strikes by the Russian Armed Forces on Ukraine's military and energy infrastructure, which President Putin personally commented as follows:

The Kyiv regime has placed itself on a par with the most odious terrorist formations. It is impossible to leave such crimes unanswered. This morning, a massive air, sea and land-based high-precision long-range weapon was launched against energy, military command and communications facilities of Ukraine.
At the same time, the Supreme Commander in his address to the members of the Security Council repeatedly used the words "terrorist attack", "terrorist methods" and "terrorist groups". Obviously, all this is a reaction not only to the recent terrorist attack on the Crimean bridge, but also to an attempt to undermine the Turkish Stream by Ukrainian saboteurs, which became known only now. Has President Putin really matured to transfer the NMD to the format of a counter-terrorist operation, about which we reasoned literally today?

If this is indeed the case, then Minsk's preparations for entry into hostilities may turn out to be more than just an imitation. A person like President Lukashenko can "fit" into such a risky business only if he is sure that it will definitely be brought to the end. It seems that the final decision on the "liquidation" of Ukraine as a Russophobic, neo-Nazi, militarized state has nevertheless been made, and Belarus will take a direct part in this by striking at Volyn.

The marker confirming or refuting this hypothesis will be the following: if the Belarusian military personnel cross the Ukrainian border, then Nezalezhnaya is definitely everything.
Reporterin Yandex News
Reporterin Yandex Zen
24 comments
Information
Dear reader, to leave comments on the publication, you must sign in.