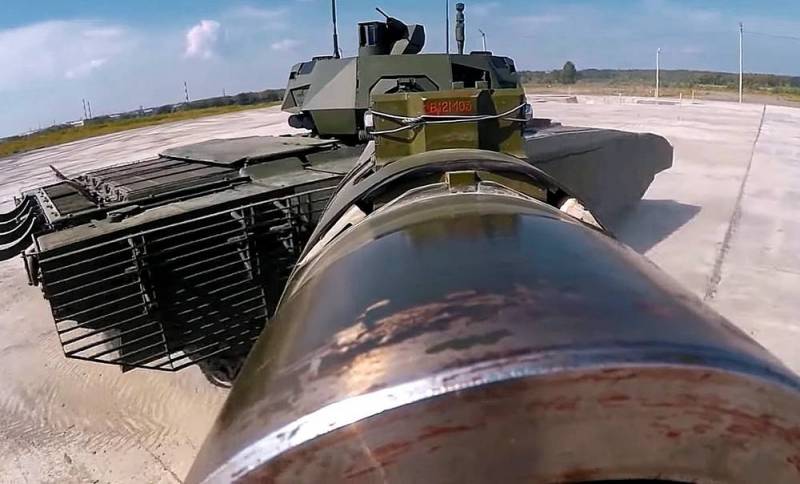 After the start of the Russian special operation on Ukrainian territory, the issue of the absence of the latest T-14 Armata tank on the battlefield in the ranks of the RF Armed Forces was repeatedly raised. This has led to speculation that they are being held in reserve to meet with more modern tanks that the Armed Forces do not yet have, and sometimes outright stuffing about their unpreparedness for combat operations, Military Watch Magazine writes.


During the NMD, Russia deployed almost the entire range of available tanks in Ukraine. Even the T-90M Proryv, which entered service in April 2020, were spotted there. But the turn came to "Armata" only after the announcement of partial mobilization in the Russian Federation.

It was the absence of the T-14 Armata that caused the most speculation. At the same time, the tank, which is actually in a league of its own, since practically no foreign rival can boast of similar capabilities, faced significant delays in preparing for the front due to various shortcomings in the Russian defense sector.
- says the publication.

Recently, a single T-14 was seen near the village of Midginskaya in the LPR. It is noted that the deployment of the tank comes amid growing signs that Moscow intends to start an escalation of hostilities against Kyiv. Moreover, even the T-72B3, not to mention the Armata, has very significant advantages over the tanks that the Armed Forces are equipped with.

The T-14 has very good survivability, powerful sensors and much higher mobility, which will make it a serious force on the battlefield, even if such tanks are fielded in limited numbers. This is especially true if the T-14 is used as a command tank for other Russian armored units from the T-90, T-80 or T-72 modifications, as before. supposed to a number of analysts, using his high situational awareness and active defense systems to support others. The psychological impact of the presence of such a tank, both on the morale of allies and opponents, can also be significant, given the possible turning point in the fighting after several weeks of losses.
- says the publication.

The native Vacuum-1 projectiles and the ability to withstand hits from any known tank projectile are key attributes for a potential T-14 clash with NATO MBTs. But Ukraine does not have modern tanks, so other features of the Armata, whose frontal armor exceeds 900 mm, come to the fore. The combination of the Malachite dynamic protection together with the Afghanit active protection system can provide high survivability against Javelin anti-tank systems, which are the main cause of Russian armor losses.

The T-14's use of a separate crew pod also provides much higher crew survivability, making it suitable for command roles. In addition, Ukraine relies on mass formations of infantry, which outnumbers the Russian contingent in the country by several times, so it is expected that the advanced anti-personnel capabilities of the T-14 using Telnik high-explosive fragmentation projectiles will potentially be valued much more than Vacuum -one"
- emphasized in the material.

At present, Russia's ability to build many and quickly T-14s for full participation in the NWO remains in question. However, if the deployment increases, it could become a priority for the Ukrainian forces and their NATO allies, who will seek to capture at least one example for study, as was done with the T-90M Proryv. Without a doubt, Russia will devote more time and resources to the Armata program due to growing tensions with NATO, especially due to the proximity of Poland, which is acquiring South Korean K2 tanks, which are significantly superior in performance to Western MBTs, the media concluded.
Reporterin Yandex News
Reporterin Yandex Zen
14 comments
Information
Dear reader, to leave comments on the publication, you must sign in.